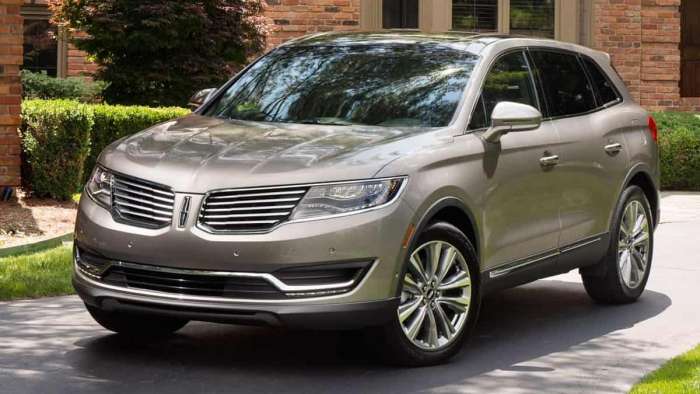 Ford has issued a recall for 60,000 2016-17 Lincoln MKX model SUVs. There is a potential problem with a battery harness wire that could wear out.
Advertisement

For the 2020 model year, there have been some significant changes to the Ford Motors SUV lineup. For example, the manufacturer changed the 2020 Ford Explorer and its corporate twin, the Lincoln Navigator. The Navigator was formerly named the MKX. For the 2020 model year but, the manufacturer – Lincoln – has changed its naming plan from a three-letter scheme to names that reflect its family of SUVs.

As noted, the MKX is now the Navigator. It joins the 2020 Corsair and Aviator and shows that Lincoln is trying to establish a unique family of SUVs that stand out. If you look at the names, they stand for adventure and travel. Indeed, the Corsair name goes back to an era in history when Corsairs roamed the seas looking booty. Later on, the Corsair name was used by the Navy on one of the service’s iconoclastic jet-fighters as it served with distinction in Vietnam and later. The Aviator, of course, spells out adventure in the air.

All that is well and good, but, the MKX is still around and alive for many car owners and buyers – you likely can find deals of 2019 and possibly 2018 MKX models at various Lincoln dealerships. Indeed, although the MKX logo has disappeared from the lineup for 2020, the manufacturer has issued a recall for MKX models powered by the 303-horsepower 3.7-liter V6. The V6 cranks out 373 pounds-feet of torque. The recall covers nearly 60,000 2016-2017 Lincoln MKXs. The Lincoln MKS recall has to do with a potential issue dealing with a battery wire harness. For 2020, Ford has made extensive changes to the Explorer and, by extension, the Navigator. The revisions have forced Ford to ship some of its vehicles to Flat Rock, Mich. for further repair.

According to the paperwork filed with the National Highway Traffic Safety Administration (NHTSA), the problem with the battery cable harness is clearance. It may not have enough room to keep it from coming in contact with the transmission shifter cable bracket.

In turn, it may be possible for the harness to come into contact with the shifter cable bracket, wearing through the insulation of the cable. Once the insulation has worn, there is the potential for a short and an increase in the chance of overheated or melting wiring, possibly causing a fire.

To fix the problem, dealers will remove four battery harness clips from the battery tray and elbow guide. Then, a wire channel shield and protective sleeve will be installed to protect the battery cable harness. Owners should contact their local Ford dealer to schedule the free repair.