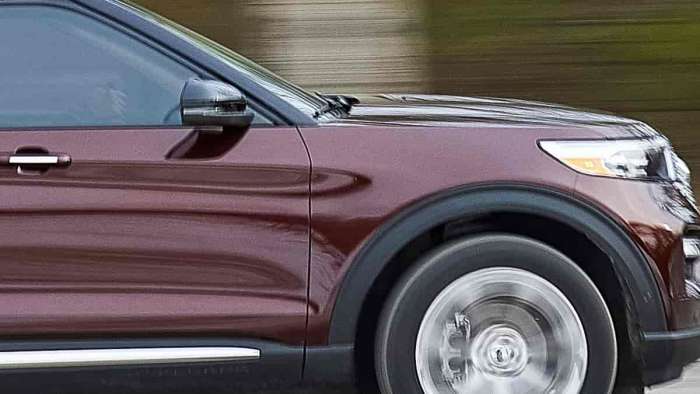 2020 Ford Explorer Launch Not Going As Smoothly As Expected

With problems that require major reworks at other Ford plants after 2020 Explorers have been built, the launch of the totally redesigned SUV is not going well, at all.
Advertisement

Who would have thought that getting a new Ford Explorer to market would cause so many problems? After all, its smaller cousin, the Ford Escape, was also extensively revised for 2020, and it is getting out the door to its dealers quite nicely. The Explorer and its corporate cousins, the Lincoln Aviator and Police Interceptor SUV, though, have experienced an unusual number of teething issues.

The teething pains have Jim Hackett, Ford’s chief exec, in trouble with the financial world. He has been the head of Ford since May 2017, and he went so far as to say that the Explorer would succeed out of the gate. The SUV hasn’t met those expectations.

Granted, the Ford Explorer is essentially a brand-new vehicle. Extensively changed or new cars bring with them their own set of problems. However, the Explorer seems to have more issues than usual. The teething blunders have been so severe that the automaker had to ship many Explorers to its plant in Flat Rock, Mich., to have them repaired.

Sales of the Explorer have plunged to about half of what they had been, a rate of about 130,000-a-year. The sales figures and the quality problems have financial types down on Hackett, who probably shouldn’t have linked his success to the winning ways of an unproven and revised vehicle. Had there been fewer changes or perhaps if the Explorer had not undergone its extensive revisions, the story might have been different. If the automaker based the 2020 Explorer on its predecessor, things could very well have worked out differently. The former model used a platform which for more than 10 years, remained stable. It wouldn’t have made much difference to sales numbers because the Explorer is the all-time leading SUV on the market. The new model is mostly unknown.

Also, the new Explorer’s manufacturing facility faced extensive renovation due to the plant’s age and model changes. Ford’s spent $1 billion in two major plant updates. The plant consists of the manufacturing site, which is 95 years old and its associated stamping mill, 63 years old.

Ironically, the new Explorer should have been better out of the starting chocks. “From [a] design, styling, and content standpoint, it [Explorer] hit all the marks,” said Jeff Schuster, an analyst with LMG Automotive. “But, if you can’t get [the Explorer] out the gate [that] is going to put questions on his [Hackett’s] credibility,” Schuster continued. It will also reflect on the vehicle itself. As noted, Hackett linked his future reputation on the Explorer and its experiences.

The fact that the Explorer needed more work will likely be a drag on Ford shares for the quarter, according to the Bloomberg financial news service. Early this month, said Mark LeNeve, sales chief, was when deliveries of the new Explorer tanked. Shipments of the Explorer were way off. A spokesperson for the automaker said Explorer is finally shipping in sufficient numbers.

“Availability has improved dramatically over the last 30 to 45 days,” LeNeve said. “We’ll be able to hit our stride starting next month.” Though the pipeline may be filling, it still cannot erase news of 2,500 Explorers that were shipped the 270 miles from Chicago to Flat Rock needing repairs. And, while the sales chief has stated the SUVs are moving, many still have required work that needs completion. (This experience with Ford mirrors the early experience with first-generation Focus sales from 1999 to 2000. At that time, the automaker placed a sales hold on Focus until the automaker completed repair issues. The problems in 2000 were far more mechanical than today when many of the issues are electronic).

Ford has not repaired all of Explorer’s problems before they reach their customers’ driveways, either. Consumer Reports, which recently took delivery of a Lincoln Aviator, found that the digital readouts for things like fuel consumption, speed, and the like, flipped and shook on the screen, making them hard to read. Consumer Reports buys the vehicles it evaluates so that it can remain independent when testing and evaluating an SUV.

“Ford does tend to struggle with new introductions, especially if they are a large departure from the previous design,” said Jake Fisher, CR’s director of testing. ”It can take a few years to get” everything right.

LeNeve confirmed that the Escape launch is much more normal even as Ford repaired Explorer problems. But why were there problems, in the first place?

One story circulating about the gaffes involves employee harassment and other personnel issues at Chicago, though Ford said it is unaware of personnel problems in the Chicago plant.

Digitaldoc wrote on October 23, 2019 - 7:30am Permalink
Typical Ford intro should not be surprising. The last gen Escape had 9 recalls in the first year. The Ranger pickup has multiple recalls on it. be quite optimistic to expect this Explorer intro to go any differently.
Marc Stern wrote on October 24, 2019 - 10:27am Permalink
Agreed. The automaker does tend to promise great things and then it doesn't deliver on its promises. Perhaps it would have been better to make sure the Explorer was solid before they: a. made the statements about how great it would be at launch; and b. tried sending them to dealers. I know folks at dealerships are probably frustrated as heck about this. I remember the Focus launch back in 2000 (I leased one for the family) and the number of recalls and sales holds that were required. It's funny that the Focus was also the Mazda 3, at that time, and the Mazda managed to get out without the problems. I guess it depends who builds them and where they are built.
I Vorick wrote on October 23, 2019 - 8:47pm Permalink
Hackett needs to go!
Marc Stern wrote on October 24, 2019 - 10:31am Permalink
I think that is a bit strong for the CEO. I think he has made a monumental miscalculation, and blunder. Let's see if he can work his way out of it with new models. I wonder how he will respond to electrics; that will be telling about whether he will survive or not. From what I understand we're about a year, maybe two, from the first Ford next-gen electrics and the F150 hybrid/electric, as well. It should be interesting. The only question I have about electrics is will they pipe engine noise out of the engine bay. Listening to the Ford V-8 running in an F150 is nice.

Tsingshan's Threat to Tesla: EV Maker Is In Battery Crosshairs
Tesla-Funded Research Reveals One of The Biggest Mysteries of EV Battery
END_OF_DOCUMENT_TOKEN_TO_BE_REPLACED