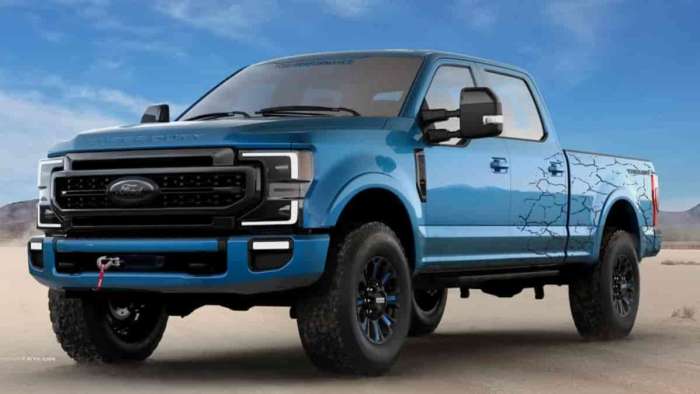 Ford has issued another Super Duty pickup recall. This time the recall is over a fire risk caused by carpeting in SuperCrew models. When one of the front seat pretensioners goes deploys in a crash it is possible that enough sparks can be generated to start a fire.
Advertisement

The Ford Motor Co. has recalled more than 500,000 2017-2019 Ford Super Duty SuperCrew pickups to fix a potential fire-risk relating to the carpeting. According to a spokesperson for Ford, the recall affects Ford’s Super Duty lineup. The lineup includes the F250, F350, F450, and F550, among others. The SuperCrew body style features a full cab with two sets of wide-opening doors that access the front and rear. SuperCrew configurations seat either five or six depending on the seat options installed.

According to a news release issued today by Ford, the problem lies with a front seatbelt pretensioner and what could happen when it deploys during a crash. On deployment, the pretensioner can generate an excessive amount of sparks, which, in turn, could ignite the carpet or carpet insulation near the B-pillar. Ford says that a fire in the B-pillar area can spread within the vehicle, increasing the risk of injury. So far, Ford has indicated that it has had one report regarding this potential problem.

In another Ford Super Duty recall last week, the automaker recalled them to repair repair an unintended tailgate opening problem. Meanwhile, the launch of the Explorer/Aviator SUVs has been marred by vehicles that have either been either repurchased or repaired.

To fix the problem, dealers will apply foil tape to the carpet and its insulation. And, they will modify the sound deadener on the backside of the B-pillar trim panel. For more information, contact Ford Customer Service and ask about recall 19S52. The number is Ford’s specific identifier for this recall. Dealers are scheduled to begin this recall in mid-January.

Jesse wrote on December 14, 2019 - 11:10am Permalink
GM has recalled the Chevrolet and GMC full-size pickups for the same problems.