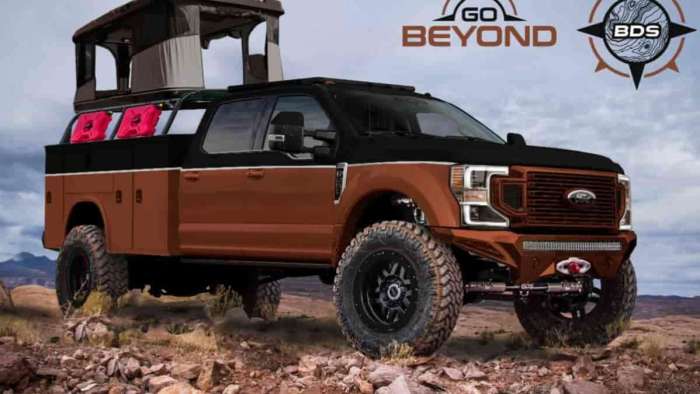 The SEMA Show this year in Las Vegas has Ford turning out many concept F-Series models, including special F350/450 trucks.
Advertisement

With the emphasis on its Ranger and smaller F-Series pickups, you would think that vehicles like the F350 and F450 would not be part of its Specialty Equipment Manufacturers Association (SEMA) exhibit stand, but no, the larger are part of the exhibit. Several Ford truck series are included in this year's SEMA concepts, including the Ranger which is represented by several concept Ranger models. Plus there are other models that address the popular F250 market including the anticipated F250 Ford Super Duty Tremor package.

Two manufacturers, BDS Suspension and DeBerti Design, have taken the honors in this arena by providing examples of each truck. BDS has used the F350 as the basis of its SEMA unique model, while DeBerti has used the F450 workplace truck for its entry.

In back, the heavy-duty truck uses a Knapheide aluminum service box to store everything needed for long trips away from civilization. For example, the box holds a hard-shell tent and awning, a Dometic CFZ-75DZW electric refrigerator, a two-burner gas grill, propane tank with custom mount. There is also a Ridetech air compressor kit with an air tank, power inverter, collapsible aluminum table, and camp chairs. There is little left out.

Moving up a truck size to the 2o020 Ford F450 Super Duty Platinum Crew Cab, DeBerti Design has taken the F450 to levels of storage and styling not seen before.

The DeBerti Design Ford F450 Super Duty Platinum Crew Cab features more than enough light to keep working after the sun goes down. Sets of Rigid LED lights ensure that the after-dark lighting remains bright. Indeed, this F450 Super Duty looks excellent at any worksite, while also improving the overall view of the site, as well.