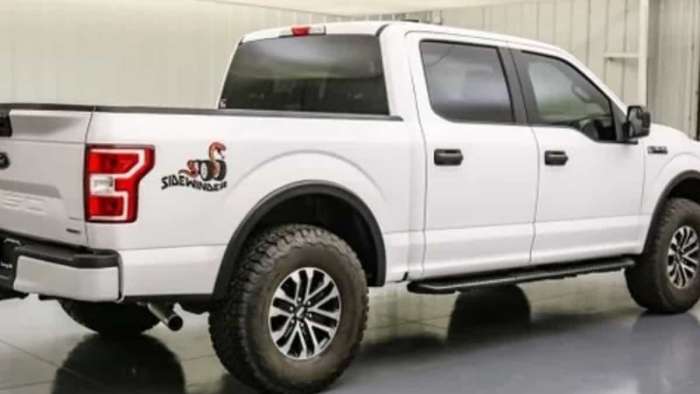 Dealership’s Sidewinder Model Adds To Its Impressive Lineup Of Specials

It is funny but usually dealership don't do much with inventory from the factory. They may slap new Monroney stickers on the rear window and may also put special pricing, as well, but how many actually take the trouble to make special models like Long McArthur Ford does?
Advertisement

The folks at Long McArthur Ford knows a thing or two about taking Ford F150s and Rangers into trucks that are very cool and very different. People looking for Ford Ranger Raptors, not sold on this side of the Atlantic, can still have what might be the closest thing to the Raptor sold here -- the Ranger Baja, a variation put together by the Kansas dealership.

Ford F150 Turned Into A Sidewinder

And, now they have taken standard F150 and built what they call the Ford F150 Sidewinder. The truck tuning crew at Long McArthur starts with a Ford F150 4X4 and the 2.7-liter EcoBoost V-6. It uses the STX appearance package, plus 3.73 gearing, running boards, a Class IV trailer hitch, the optional 36-gallon fuel tank and more. Equipped as is the Ford F150 is quite a pickup, but, when the Long McArthur tuners finish it is much, much more.

To accommodate the new wheel-tire combination, the speedometer has a recalibration performed, following a wheel alignment.

This pickup’s pricing represents a considerable saving. The MSRP on the F150 is $54,785 with the dealership’s custom additions. The vehicle’s window sticker lists the price on the Sidewinder as $46,190. However, this is not the Sidewinder’s bottom line. There is still a bit more built into the pricing. Indeed, when the dust settles the pricing represents a full $10,000 discount so that the bottom line is $44,785.

Watch for news about the F150 and other Ford trucks like the Ranger. You will also receive information about planned changes to the Ford F150 and other trucks. Click To Subscribe To Torque News YouTube Channel For Daily Ford and Automotive Industry News Analysis.

For someone thinking of buying the truck, here are a couple of interesting factors about this truck:

The Sidewinder Package, which isn’t required, by the way, comes with a three-year/36,000 mile warranty through the dealership. And, if you decide that you would instead take a basic 4X4 pickup, you would save more money.

Source: The Ford Authority is one of the best sources of information on planned, current, and future Ford F150 models.

Tesla-Funded Research Reveals One of The Biggest Mysteries of EV Battery
Tesla Tesla Buyer Nets a Whopping $12,000 Discount After Asking for Reduction
END_OF_DOCUMENT_TOKEN_TO_BE_REPLACED