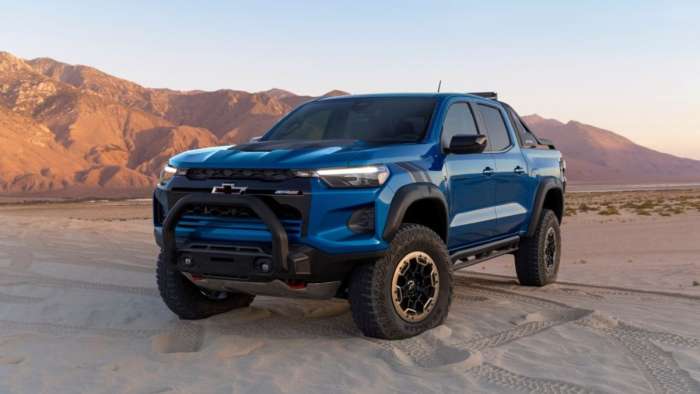 A new chassis and three engine configurations offer more of what the core customers want.
Advertisement

The 2023 Chevrolet Colorado is making its big debut, with three off-road models and more capability for off-roading fans. It is getting its new 2.7L turbo engine from its very capable big brother, the Chevy Silverado. Most of the talk about the new midsize Colorado will be about its all-new Trail Boss and Desert Boss models.

“The all-new Colorado is enhanced in every way,” said Scott Bell, global vice president of Chevrolet. “With its rugged and sporty styling, enhanced capability, new technology and customization options, it’s designed to do more for discerning customers and still offer them great value.”

The 2023 Chevrolet Colorado will only be sold in a crew cab with a short bed. Designers found those were the most popular configurations and have decided to build on that. There will be four unique interior packages, featuring a standard class-leading 11.3-inch-diagonal color infotainment touchscreen. The truck will only be sold with one of the versions of the 2.7L turbo engine. As of now, there is no diesel, hybrid or planned EV version. During a video conference before the truck’s debut, Scott Bell said that “EV is a journey, we wanted to stay true to our customers that want an ICE (internal combustion engine) vehicle.”

The base 2.7L turbo will be standard in the work truck and the LT. The more powerful engines will go in the more expensive trucks. The Plus and High-Output versions will have maximum towing of 7,700 pounds. The engines will be paired with an eight-speed transmission.

“The new Colorado is a lifestyle enabler,” said Nicholas Katcherian, vehicle chief engineer. “Because outdoor activities are a big part of our Colorado customers’ lifestyles, we’ve made the truck even more capable to support them — from increased bed functionality to comprehensive performance enhancements that help take them farther.”

One of the new features that is sure to be a hit is the new tailgate, that has a storage system built in. The tailgate itself has a midway setting, so you can haul longer items. The storage unit is actually built into the tailgate, it opens up to hold tools and is also water-tight so it can be used as a cooler.

Chevrolet is giving the ZR2 some upgraded finishes including a spray-on bedliner, a high-clearance front fascia, including cut-out corners and the Chevrolet “Flow Tie”. The ZR2 has modified front and rear bumpers for better approach and departure angles. To make the truck tougher and more capable it has cast-iron control arms and selectable front and rear electronic locking differentials and underbody skid plates.

The first-ever, special-edition ZR2 Desert Boss package, kicks it up several notches, with racing-inspired features, including:

The 2023 Colorado is also loaded with new technology to make the driver’s experience more informative and enjoyable. In the video conference, Nick Katcherian said, “The technology in this truck is a game changer” and described it as a “huge step in overall technology continuity.”

The new Colorado will feature Google Built-In for accessing maps. It will also an app for off-road performance, including GPS. It will offer more camera views than competitors in its class, with up to 10 camera views, including a segment-first underbody camera on Z71 and ZR2.

The Colorado will also get the cool trailering technologies that first debuted on the Silverado. Hitch Guidance is now standard, while Hitch View and Chevy’s Trailering App are new in 2023. The hitch cameras help the driver line up to the trailer and offer close-up views making it much easier to hook up to whatever they may be towing.

Production for the 2023 Chevrolet Colorado begins in the first half of 2023 at General Motors’ Wentzville, Missouri, assembly facility. Chevrolet will announce pricing and fuel economy closer to the truck’s release.