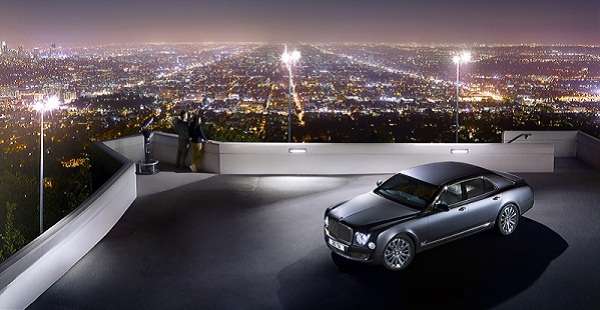 Bentley jumps on board the plug-in bandwagon

The luxury automaker will introduce a Mulsanne plug-in concept at the Beijing auto show and will follow with a production SUV in 2017. Bentley plans to electrify 90% of its vehicles by 2020.
Advertisement

The Volkswagen Group has proven itself to be committed to electrifying its lineup, particularly in the form of plug-in electric hybrids. Bentley, the prestigious luxury brand of the VW Group, is showing that it is no exception by introducing plug-in models to its lineup.

Bentley announced in a press release that it will display a plug-in Mulsanne concept at the Beijing auto show later this month. Rather than green or blue accents found in mainstream electric vehicles, Bentley has aptly chosen to provide copper detailing to represent the vehicle’s electrified character. The concept previews the technology that will go into production with an upcoming SUV set for a 2017 release date.

In the press release, the company claims 25% greater power and 70% fewer emissions compared to the legacy powertrain. The second figure is rather vague based on the nature of a plug-in hybrid, but Bentley also indicated a concrete number: 50 km, or 31 miles, of all-electric range.

The luxury car maker isn’t entering the electric vehicle scene tentatively – they are storming in with guns blazing. Throughout the press release “Bentley hybrids” are referred to, indicating future plug-in models. According to the appropriately named CEO of Bentley, Dr. Wolfgang Schreiber: “By the end of the decade, at least 90% of our production will be available as a plug-in hybrid. We are proud to be pioneering these developments in the luxury sector."

Bentley’s model range isn’t exactly a lengthy list, though, currently consisting of the Mulsanne, Flying Spur, and Continental GT (coupe and convertible). The plug-in SUV will be added sometime in 2017. It is unclear exactly what Dr. Schreiber meant with his statement, but it likely means 90% of all Bentley vehicles will be plug-ins by 2020.

The announcement from Bentley merely adds to the list of luxury and supercar manufacturers who have elected to implement electric powertrains: McLaren, Ferrari, and Porsche all have recently come out with hybridized vehicles. For Bentley, the move is a logical one; with models that easily surpass $200,000, adding a battery pack and motor no longer seems like such a big expense. Though we will probably never get to drive one, we look forward to seeing these efficient land yachts silently creep up on unsuspecting valets.

Parks McCants wrote on April 9, 2014 - 5:31pm Permalink
Well written Luke. Thank you. As to volume? A drop in the pond as the English say. The Bentley in its current manifestation is a very limited production vehicle. And, it isn't unusual to find two or three "new" model years sitting on a very exclusive Bentley, Rolls Royce showroom floor. Will the '1%' jump on the EV bandwagon, Who cares? What we need is an affordable mass-produced EV for the general population. Untill than, EV's at this level will be just another toy for the wealthy.