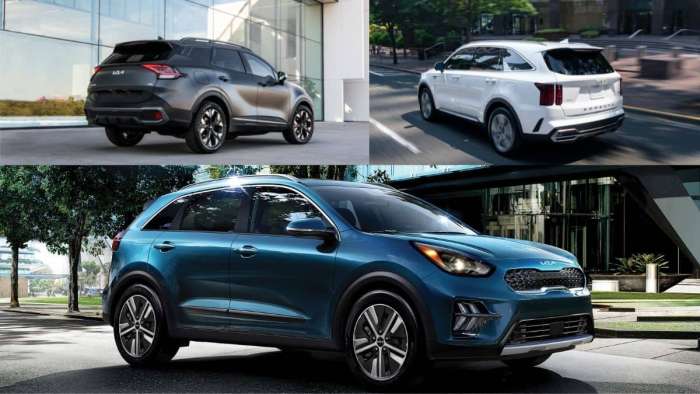 Why Kia Will Slowly Ramp Down PHEV Production Starting Next Year

Kia has recently expanded its U.S. plug-in hybrid electric vehicle (PHEV) range with the introduction of the 2022 Sorento PHEV and the forthcoming 2023 Sportage PHEV, which join the Niro PHEV already on sale for several years. But Kia may not be planning to offer any additional PHEV models after these, and that begs the question: Why?
Advertisement

As I have referenced in previous articles, InsideEVs confirmed Kia’s plan for “peak” PHEV production to be 2022. That’s now, in case you might also still be trapped in that pandemic inspired fog of “what year is it again?”. While that means we will see more PHEV models for sale from Kia than ever before (and perhaps ever again) this year, it’s apparently all downhill from here. Or rather, from here on electric (EV) and hybrid electric vehicles (HEV) will be the primary focus of Kia’s “electrification” of their model line and PHEVs will gradually decline in number and or be phased out. I thought this stance might be due to balancing battery supply, or perhaps because PHEVs are just a little more complicated, conceptually speaking. Customers (even the know-it-alls) sometimes struggle with the features and functionality of PHEVs as brands implement the technology differently and because it can be challenging to get the advertised efficiency or range, depending.

Thanks to Green Car Reports, we now have a little better explanation for why Kia has made its decision to gradually ramp down its production of PHEVs after this year. According to Steve Kosowski, manager of long-range planning and strategy at Kia Motors America, it is due to governmental or regulatory structure around greenhouse-gas targets, with EVs being scored higher or worth more (than PHEVs) in “credit” toward carmakers‘s fleet average fuel economy and or CO2 reduction targets. When it comes to broader electrification of model lines though, Kia and other carmakers are also deploying more HEV options as a means of improving fleet average fuel economy and lowering carbon emissions since HEVs cost less and can be made in larger numbers with limited battery supplies. These are likely reasons why companies like Toyota and Honda have so far focused more on production of HEVs than plug-in vehicles.

So it seems that the eventual phase out of PHEVs may be more a factor of governmental policy than customer acceptance/market demand, or complexity. GM may have been one of the first automakers to see “the writing on the wall”, when they decided to stop producing the Chevy Volt after the 2019 model year. The Volt still has a loyal, die hard group of owners and fans that love both generations of that groundbreaking vehicle though. GM’s choice to end PHEV production in the U.S. has also left them with few if any plug-in vehicles to sell after the battery recall and stop sale last year on their Bolt model and before they have been able to produce many of their new, higher priced Hummer and Cadillac EVs.

Interestingly, other automakers like Toyota and Ram may be expanding their PHEV offerings in coming years, with a possible Toyota Highlander PHEV and Ram 1500 4xe in the works. Might that be because they haven’t figured out what Kia, GM and others have? Probably not, since PHEVs are a “bridge” to EVs for both customers (who may need or want the security of a gas engine backup) and manufacturers (with ongoing battery supply limitations, more PHEVs can be made from the same stock of batteries than full EVs). Also in these two cases, PHEVs may also be a “practical” design option as well, since large SUVs and pick-ups need a lot more batteries to get acceptable range, especially when fully loaded or towing, and these large format PHEVs may make the most sense in terms of reducing gasoline consumption and emissions and keeping prices closer to mainstream averages. To bring it back to where we started though, perhaps Kia will offer other PHEVs in the future, besides those set for this year, as an approach to electrify their largest vehicles which would otherwise need the most batteries to produce. Only time will tell.

MattR wrote on February 21, 2022 - 4:24pm Permalink
Too bad. PHEVs cover that use case BEVs don't: long range driving. Even with limited all-electruc range,. PHEVs get the efficiency benefit of regenerative braking. When we replaced out 2012 Mazda CX-9 with a Pacifica PHEV minivan, we went from 16-18 mpg to 30-50 with more usable space to boot.
JustinHart wrote on February 22, 2022 - 2:33am Permalink
I agree that PHEVs are great, and necessary during this time of transition, and for longer than Kia might think since it will take quite some time to deploy the rest of the charging infrastructure we actually need for EVs to fully replace ICE only vehicles (think of how many chargers need to be installed for urban dwellers living in apartments and condos, not to mention how long it takes to turn over 90% of the total fleet). But the good news is Kia plans to still make PHEVs until at least early next decade, they just won’t make that many. Other brands will likely still be making more of them 10 years from now since even that far off battery supply will still likely be insufficient for 90% of vehicles to be EVs, and charging infrastructure still being built out in some parts as well.
Stephen Goldberger wrote on February 24, 2022 - 12:56pm Permalink
What's not being mentioned is the impact of the Alternative Fuel Tax Credit. At the moment, the price difference between most PHEVs and their respective HEVs is less than the tax credit. But once the tax credit is phased out, the economic case for purchasing a PHEV over the HEV goes with it.
Justin Hart wrote on February 26, 2022 - 1:37am Permalink
Stephen, that could well be true, but it certainly depends on each person’s use case, whether or not there might be other state incentives, whether or not PHEVs might hold their value better (something we have seen in recent times due to the pandemic and the surges in gas prices), among other reasons. I’ll give you my use case as an example: I chose to purchase the Sorento PHEV over the HEV version or another HEV SUV because I knew that I would be able to get approximately 3x better mpg in the PHEV than I could in the HEV (in terms of how much gas I would use to travel the same distance on an annual basis). I know that I do a majority of my driving in shorter stints of 40 miles or less. I am thus able to do around 70-80% of my annual driving in the Sorento PHEV on battery power. As such, that means I save about $600-$900 per year (including the cost of gas plus electricity vs just gas in an HEV equivalent model) in fuel costs.Certainly, it would take a number of years to make up the difference in price, but PHEVs may also have less frequent oil changes, and less maintenance over the long term since the gas engines and systems it utilizes get far less use than on an HEV equivalent. There are other factors to include of course, and your mileage may vary, as always. Cheers!

Tesla Contemplates A New Strategy for China Retail even As Sales Boom
Jay Leno on Elon Musk & EVs: “I Think He Should Get ... Credit"
END_OF_DOCUMENT_TOKEN_TO_BE_REPLACED