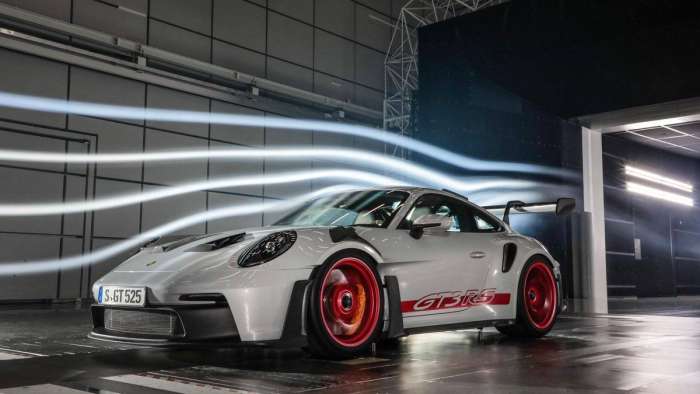 The latest Porsche 911 GT3 RS is basically a road-going racecar with some of the most extreme aero ever seen on a production car including a Formula 1-style Drag Reduction System.
Advertisement

Porsche's latest 911 GT3 RS is here and with looks like that there's no mistaking the fact that it means business.

Rather than throwing a ton of horsepower at the new RS, Porsche has instead focused on aero and cooling taking proven features from the track-only 911 GT3 R and applying them to this road-going racecar.

Aerodynamics & Cooling
First on the list of new additions is a bigger radiator in the nose where a normal 911's frunk would be, replacing the usual setup of three smaller units. Like many aspects of the new RS, this comes from the 911 RSR and 911 GT3 R racecars and allows more space for active aerodynamics at the front end.

Active elements in the nose maintain maximum grip and funnel air to the radiator while pressure in and around the wheel arches is managed by a combination of blades and vents above and behind the front wheels. The cooling setup is so effective that the inlets in the rear wheel arches are now purely for aero channeling and aren't needed to keep the 518 horsepower flat-six happy out back. The rear wheel arches feature a similar arrangement of blades and vents as the fronts.

Then we come to the absolutely massive and DRS-enabled swan neck rear wing. Featuring a fixed main section and moveable upper piece the DRS can be deployed with the push of a button on the steering wheel for straight-line speed, and can also serve as an air brake in cooperation with the front flaps under heavy deceleration.

Suspension
This aero fixation permeates into the guts of the RS, with Porsche's engineers reasoning that "the wheel arches of the new 911 GT3 RS are subject to powerful airflows." To handle and exploit these flows, the new GT3 RS has been given suspension designed with "teardrop-shaped profiles" that generate 88 lbs. of front axle downforce at high speeds. If that doesn't put a smile on your face... you're probably not a massive nerd and you have a fulfilling life.

For the rest of us, Porsche's engineers have fettled the RS's front and rear suspension to "significantly reduce pitching under braking" while the rear-wheel steering's been revised as well.

There are three drive modes: Normal, Sport and Track with the latter allowing the driver to adjust the car's front and rear suspension compression and damping behavior on the fly through a motorsport-derived operating system. There's also a dial on the steering wheel to adjust the rear differential.

Engine
New camshafts with more aggressive cam profiles raise the naturally aspirated four-liter flat-six to 518 horsepower while the seven speed PDK gearbox gets shorter ratios than the GT3 for more explosive acceleration. Dedicated air intakes on the underbody keep the transmission cool during the extended trackwork the RS was designed for. The sprint from 0-60 mph takes 3.2 seconds and flat out the GT3 RS will do 184 mph.

Wheels and Brakes
The RS gets marginally bigger brakes than the GT3 with Porsche's Ceramic Composite discs available as an option. A set of lightweight alloy forged center-lock wheels come standard but shell out extra for the Weissach package and you're given the option to shell out again for a set of featherweight forged magnesium kicks which save a further 18 lbs.

Speaking of lightweight materials, Porsche has made liberal use of carbon fiber-reinforced plastic on the RS with the door skins, front wings, hood, roof and bucket seats made from the stuff giving the GT3 RS a base weight of 3268 lbs.

The Clubsport package can be optioned for no extra cost adding a steel roll bar, fire extinguisher and six-point harness for the driver. The Weissach package comes with additional cost but gives exposed carbon on the roof and aero parts as well as replacing the front and rear anti-roll bars and roll cage with CFRP versions for further weight savings.