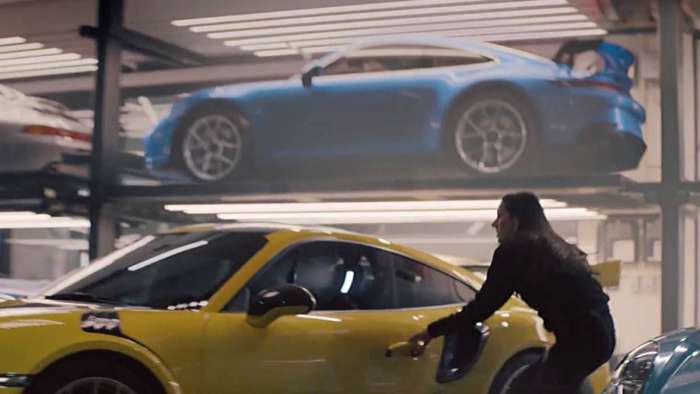 We discuss the ever so anticipated Porsche 992 GT3 RS track machine and the recent clues that Porsche has left behind for car enthusiasts.
Advertisement

Ever since the 991 GT3 RS came out in 2016, Porsche had no greater free advertisement in the automotive world, other than maybe Tesla with the Model S. Everyone, everywhere was sharing pictures, thoughts, and opinions on the wild, fender-vented and cup car-winged GT3 RS. It also helped that it was the production track car benchmark, disregarding the records that the million dollar 918 Spyder set.

Just last year several stories and rumors came out during Porsche’s press car drives and events about the new coming GT3 RS. Of course, speculation of how much faster and lighter it is came up, but the shocker that came to the higher profile journalists was what the Porsche engineers were saying. They were geeking out about the new GT3 RS that was being designed and telling people, “Hey, you should really wait for the 992. Trust us.” Presumably delivered with a wink and a secret note on a piece of scratch paper detailing the maximum lateral G-forces or something.

These engineers are putting the person who buys the newest 911, Hurucan, or 488 every year in a tough spot. Which newest, best driving, most attractive, and fastest new car they should buy this year. Or should they wait another 6 months for the even newer, and more secret one? If you are in this position, congratulations, but if you-like me- are not in this position, I am going to ask you to dream. Which new marvel of engineering would you have spent the money on?

Well, if you are a Porsche enthusiast, the letters “GT3 RS” are likely to have left your mouth and considering the excitement the German engineers have for this new one, we can anticipate a game changing car. It is too bad that the 992 GT3 RS isn’t out yet and Porsche can’t sell you on one today, but obviously that hasn’t stopped the Porsche engineers from doing so.

By now, we have seen spy photos of the 992 GT3 and have had some rather clever easter eggs as well. The Porsche Superbowl commercial is blowing up with screenshots of a very blue 992 911 that looks suspiciously like it's wearing a GT3 RS’ clothes.

While this is a cool, subtle little look into a possible body shot of the new car, I think it is the least of our worries. The guy or gal with all that money and all those big decisions is going to test drive every new, track focused car from the big brands, and at the end of the day their choice goes with the best package of performance and enjoyment. So here are some things that we’ve learned about the new car:

Making The GT3 RS Even Better

The power plant is to be modified slightly. Porsche’s production line chief August Achleitner said that the new car will use an iteration of the current flat six in the GT3 and will gain a slight displacement advantage. It most likely won’t be enough to go from 4.0 to 4.1 liters but enough to gain some torque in the mid range.

The Porsche executive said that the increase in performance is due to the work that the performance team has been doing with the Porsche racing team, as they have used design cues from the race-spec engine. The best news however, is that the engine is confirmed to be staying turbo-free. That’s right, the 9000 RPM naturally aspirated flat six is going to stay away from any ugly breathing apparatus (Turbos).

Next, we do know that the 911 will remain with the seven-speed dual clutch transmission from the previous GT3 instead of going with the newer eight-speed auto that Porsche has been using in other models. Speaking of transmissions, and to everyone’s benefit, the manual transmission from the GT3 Touring will continue into its successor. Porsche is one of the few high-end brands still offering a manual in any of their cars especially in the track focused GT3. Ferrari, Lamborghini, McLaren and several more have ditched the idea of a manual supercar for years and still they trail Porsche overall in lap times and performance.

Furthermore, the 992 is rumored to feature special suspension components made from carbon fiber. This is not the first time the material has been used for suspension, but it is one of the first times we’ve seen carbon fiber on a major production track car like the GT3 RS. To be honest, I am surprised that this didn't happen earlier, but at the same time I personally never expected it to be applied to suspension. It will save weight, increase rigidity, and open new doors for Porsche in the future.

See you in my next story about Porsche's new experience facility in the Italian countryside.