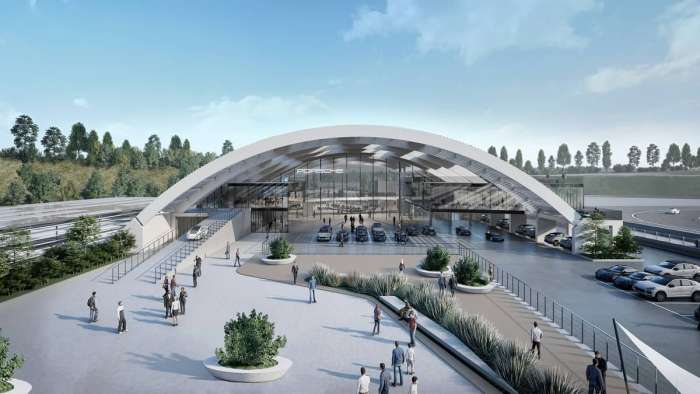 Porsche's 8th experience facility will be a dream destination like no other.
Advertisement

Porsche wants nothing more than to get people excited about their brand and develop a connection with their customers. The cheeky ad campaigns from the past and the willingness to give press cars to companies is just the surface. And in today’s age, Porsche will get you hooked with their new, lavishly luxurious Experience Center just east of the historic city of Milan.

The facility is going to be built on a race track in the North of Italy called the Autodromo di Franciacorta. Porsche intends to use the 150 acres of land to build a one stop shop for everything Porsche. And no, it’s not a dealership. The Porsche Experience center in Italy will join other destinations that are similar to it. There are seven other Porsche Experience Centers (PEC’s) located in Los Angeles, Atlanta, Germany(2), LeMans, England, and China.

Porsche acquired the lot in 2019 with intentions of it being very similar to others. Since then the company has decided to throw nearly $30 Million at the project in order to turn it into a one of a kind place for not only Porsche enthusiasts, but car enthusiasts as a whole. So why do they need so much money? The board of executives wanted it to be an “ultra-modern” facility with not only just the cars and a track.

By 2021 Porsche wants to see that $30 Million turn into a top of the line race school with a lineup of most likely Carrera 4S and Caymans dominating the pack, with of course the Porsche GT3 RS and hopefully a GT2. They want a large modern building with a 2400 square foot lobby area with a suspension bridge and a terrace area to overlook to the cars flying by on the track.

Even More Amenities at The Porsche Franciacorta Track

Porsche won’t stop there though. The facility will also include a fine restaurant, hospitality and concierge services, and track simulation booths with full equipment to refine your track skills. Once you have taken a practice lap around the Franciacorta track on the simulation you will be able to go right outside and do the same thing in a Porsche 911 on the real track. Along with the track, Porsche intends to offer an off-road track presumably with lower trimmed 911’s and possibly their SUV’s.

Porsche and The Customers

When all is said and done, the destination will officially be The Porsche Experience Center-Italy or Porsche Italia and will aim to get over 20,000 customers a year. This number is very high considering the expensive prices we would expect for an experience like this. For example, Porsche does a “Porsche Tour of Tuscany” in which you and 15 of your best friends get 7 days with several different destinations including beautiful hotels, driving roads, and luxury activities accompanied by Porsche guides along the way. A single room for this trip will cost you $10,000… for the room. Add the plane tickets for your family, another room, and the extra costs involved, and you are on your way to a budget breaking $20,000 trip.

Aside from complaining about how I will never be able to afford the Porsche Tuscany Trip, I must say that Porsche has the right mindset going on, and they have for years. The person who buys a brand new Porsche is more likely than not, a successful person. And if Porsche offers them free overseas shipment of their new 911 Turbo S to the Porsche Italia Experience, they will most likely buy the week pass to the new facility and become a customer for life. They have a way with marketing and creating a lifestyle associated with the brand that is like no other. A company like Ferrari may be the brand with the highest status of success, but Porsche is the brand that is turning those Ferrari owners into Porsche customers right in their backyard.

See you in my next story discussing the details of the Aimé Leon Dore Porsche collaboration.