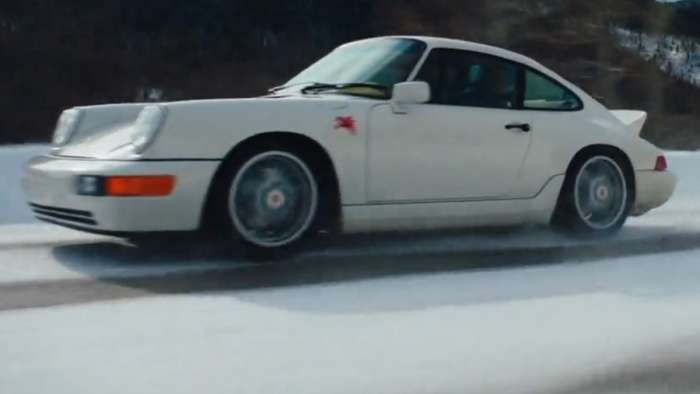 Porsche and the brand Aimé Leon Dore have come together to recreate a 964 Carrera with a complete custom restoration. This is a significant collaboration resulting in one-of-a-kind 1990 Porsche Carrera 4.
Advertisement

The Porsche community knows too well that we’ve seen enough aftermarket, modified, 911’s. The Singers, The Sharkworks, The Guntherworks, The Workshop 5000s, The RWBs, and too many more to count. But a company like Aimé Leon Dore is different. Unlike the list of Porsche shops that I just named, this brand doesn’t specialize in Porsches or cars at all. They are all about clothing and lifestyle.

Who Is Aimé Leon Dore?

To quote the brands website itself they are a “lifestyle, sport and ready-to-wear brand based out of Queens, New York. With a strong focus on simple yet powerful design, we are driven to create timeless work by portraying an aesthetic that is uniquely our own.” They have a large selection of high-end streetwear, inspired by classic looks. It sounds suspiciously like how someone might describe Porsche: A brand that makes high-end streetcars, inspired by the classic shapes of 911. Obviously hyperbolic, but it brings us to why these two brands are collaborating in the first place.

Aimé Leon Dore (ALD) and Porsche are both dedicated to refinement and class. This resulted in an idea for a campaign in which the 911 they restore has an interior style and other design cues that represent Aimé’ latest collection. Aimé is a very new company -currently on their 6th year in business- and a partnership with a world renowned brand like Porsche will take their business model into new places.

The campaign project is a 1990 964 Carrera 4 that is most likely from one of Porsche’s warehouses, that has been completely redone minus a few things that we don't know yet including any engine modifications. The interior is wrapped in an ALD style brown leather, including the steering wheel, dash, seats, shifter and any other touchable surface. Houndstooth cloth is laid in the interior trim, perfectly complementing the rich nut brown interior. The leather itself is made by a brand named Schott, and the Houndstooth by Loro Piana, both very high quality clothing brands.

The exterior is painted in an ice white color which really popped in the release video. The car features some classic 1980’s and 1990’s style cup 2 wheels that put the car back to it’s correct age. The back end of this car is stunning, spotting a Carrera RS 2.7 style ducktail wing, and an ADL crest on the engine cover slats. Even better is the Marque’s pegasus painted on the front fender that throws back to the Porsche’s racing heritage.

The production of the video was quite good, resembling a 911 advertisement, it hit all the boxes. Pretty nature shots, drifting, and hardcore weather. The beautiful, white classic comes into the shot mostly with its thundering engine note. The exhaust is a key part of the whole video which begs the question if it is stock exhaust or not, because it sounds extremely loud. Half way through, we get some slow b-roll footage of the interior, showcasing those glorious houndstooth seats and leather-wrapped everything.

Thanks to ALD, the car is of a flavor that we don’t get to taste often. Don't get me wrong though. The other aftermarket Porsche tuners build some of the greatest driving cars in the world, justifying all the $250,000+ price tags we see, but the Aimé Leon Dore Carrera is one of the rare cars where we see Porsche actually involved.

At the launch the director of the video talked about how they wanted to brush the car up against some snow on the drifting shots but ended up scratching the bumper on some unknown ice. They taped the bumper and kept going. I only mention this because both of these companies are driven to create a unique and real project. The scratches only gives it more character.

The Significance of The Aimé Leon Dore and Porsche Collaboration

Teddy Santist, founder of ALD, made a statement reminding people about the significance of their collaboration saying “Porsche has been woven into the DNA of Aimé Leon Dore since the brand’s conception. For me, the Porsche 911 is perhaps the single most iconic automobile of all time, a car whose design synthesizes many of the values that connect Porsche and Aimé — simplicity, ambition, tradition, and beauty.”

Here we see why the two companies came together. ALD wants to associate their luxury brand with an 89 year old staple of refinement and performance, while Porsche makes a connection with a young company and in turn attract young customers. Porsche never directly works with other private companies unless they are an auto maker and of the same parent company, which makes this project extremely special and most likely extremely expensive.

See you in my next story where I discuss how Porsche Exclusive Manufaktur will sell You 600 different options of Taycan EV.

Tsingshan's Threat to Tesla: EV Maker Is In Battery Crosshairs
Tesla-Funded Research Reveals One of The Biggest Mysteries of EV Battery
END_OF_DOCUMENT_TOKEN_TO_BE_REPLACED