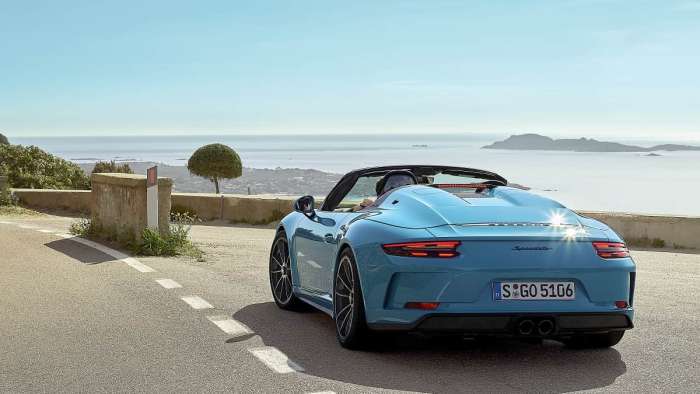 The Porsche Speedster: The Story of The Roofless and Rare Sports Car

If you thought Porsche Targa was the cool unique 911 of the Bunch, think again and consider the Speedster. How did it come about?
Advertisement

In the 1950’s, Porsche was a very small business. Most people are shocked to hear that a brand of such stature like Porsche wasn’t on a level like the big 3 in America or the other Italian brands in Europe. But Porsche was a little, family owned company that made fewer cars in a year than are sold in one hour in America. This meant that it was forced to do drastic things in order to get its name out in the huge automotive world.

Max Hoffman, a well-known car importer and marketing person, noticed a pattern in the European sales of cars. Little companies were making 2 door, open-top sports cars for the public and selling them like hot-cakes in the early 1950’s. Luckily, he told Porsche to hop on the train and do what everyone else was doing. This wasn’t the birth of the Speedster though, no. This was the Porsche Type-540, a small, 2-seater with no roof. The car wasn’t a full production run as they only made about 20 examples for racing. Buying one would probably set you back a couple million, but the point is that the type 540 and its race-inspired chassis was the formula from which the Speedster would eventually be conceived.

1954 rolls around, and Porsche re-evaluates Hoffman’s remarks. The Company decides that they can take their existing models and tinker with them to create a desirable sports car. This is the 1954 Porsche 356 Speedster. They took a 356 Cabriolet, raked the windshield line back, cut out weight, and provided a less than useful, lightweight soft top. The best part though- you can remove the windshield entirely, for racing. This was the speedsters calling card, it was meant to be that California cruiser and Hollywood show off, but underneath it was designed to be driven at the limit.

The next decade of Porsche included the release of the 911, which dictated a lot of Porsche’s time and energy into the design of that car, leaving dreams for the Speedster behind for a long time. How long? Over 30 years to be vague. The 1989 model year brought a new Speedster that had all the fixings of the original, plus more horsepower. Now that more eyes were on the company after 20 years of 911’s, the Speedster proved to be the goldilocks of the litter. A return-to-form body style, with a soft top, and racier performance sparked up excitement for the speedster on the late 80’s.

Also see: The Porsche 911 RSR Has A Great History, And The Newest One Makes Its Debut This Year.

Despite Porsche’s nearly catastrophic failure in the 90’s, the Speedster came back! You almost want to shed a tear looking at the 964 Speedster from 1992 as it represents the origin of the company while driving towards bankruptcy at the same time, but thankfully it wasn't the end of Porsche, or even the Speedster for that matter. Porsche didn’t sell a 993 Speedster, though they did make one, actually two to be exact. One for Ferdinand Porsche and one for Jerry Seinfeld.

The Speedster skipped the 996 generation for obvious reasons and went after it again for the 997. The company decided to sell exactly 356 of the new Speedsters for the 2010 model year to pay homage to its grandpa from 54’. The 997 Speedster once again solidified the unique combination of performance and style. Spotting an amazing looking rear cover (a staple of the speedster) and the underpinnings of the 911 GTS, this Speedster was arguable the hottest of them all. Since then the 991.2 Speedster has come to fruition after multiple hyped concepts. It’s faster and more capable than the 997, only creating bigger shoes to fill for the 992 generation.

Seeing any Porsche Speedster on the road at all is an experience to cherish. Whether you love or hate the body style, they’re rare, and they pack an unlikely bunch of characteristics into a classically whimsical body style. Those few people who pay the premium price, get a premium experience like no other, being able to take a GT cruiser and hammer it on a track day with the wind blowing in your hair. My money would buy the 997 or the G-series Speedster, only because I can’t afford that 356.

By the way, Porsche just posted record U.S. sales. See you in my next story comparing Porsche Cayenne and Porsche Panamera.