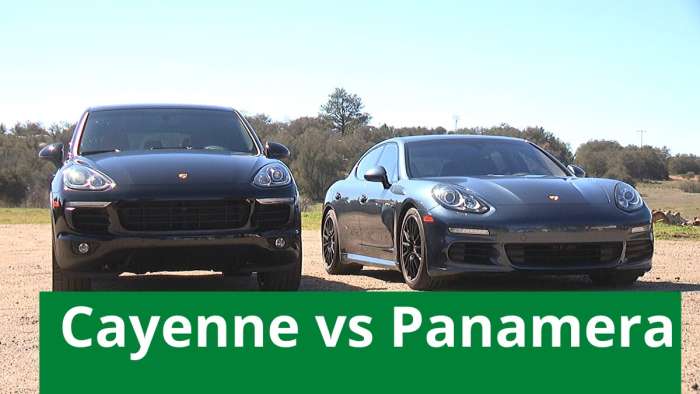 Porsche Cayenne vs Panamera: Which One To Buy

If you want to buy a Porsche and need 4 or more full size seats, you will most likely be deciding between the Porsche Cayenne and Porsche Panamera.
Advertisement

Before we discuss the specifics of the cars, we must ponder why these cars even exist in the first place. Porsche is synonymous with high end brands that make nothing but GT’s, sports cars, and supercars (i.e Ferrari, Lamborghini, Aston Martin). So why would Porsche make a family car and not the others? Well, in truth, 2 out of the 3 brands that I used as examples have 4 door cars, and the last one (Ferrari) has a hatch-back called the Lusso. Maybe it isn’t a very big surprise to see 4 door Porsches after all.

Origins Of The Porsche Panamera and Cayenne

Porsche Cayenne: In this day in age we are in the era of the SUV and crossover. The world has gone through several trends in the family car department In the 1970’s you would have the station wagon, maybe with some wood panelling and an engine that was a couple hundred cubic inches too big. In the 80’s, the minivan took control and dominated with its egg shaped body and economy car power. Now after the turn of the century we arrived at the SUV.

People started to buy these trucks more than anything else, and since Porsche was coming out of a near bankrupt state, selling an SUV was the only option. This was the start of the Cayenne.

Porsche Panamera: The Panamera has its roots from longer ago. Porsche executives in the 1950’s decided to design a 356- based, 2 door sedan as a concept, dubbed the Porsche Type 530. This idea of a comfortable 4-seater Porsche continued with concepts in the 1960’s based on the 911, in the 80’s with a stretched version of the 928, and then with the Type 989 sedan concepts in the early 90’s. The 989 is where we first see where the front engine, Panamera-esq shape coming to life. The project was cancelled due to economic purposes but finally released almost 20 years later in 2010.

Porsche Panamera and Cayenne Are All Grown Up

Now, both the Panamera and Cayenne have been in production for over a decade and have been developed to the point of having extremely capable performance variants. Today the Cayenne shares a platform with the Audi Q-series SUV’s and up until last year it looked almost identical minus the badge. The Panamera, on the other hand, had a unique style that wasn’t like anything, mostly because no other company wanted their car to look like it. Now the Panamera and Cayenne look much better and are quintessentially Porsche.

The Cayenne ranges from a base variant with a turbocharged V6 making 335 horsepower, to the top-end E-Hybrid Models making around 670 horsepower from a twin turbo V8. And although both trims of the Cayenne only have the standard aluminum multi link suspension, the big car can out handle almost any other sports utility vehicles on the market. The Panamera is quite similar in its range of engine options. The base car has the same turbocharged V6 and the E-Hybrid Turbo models have the twin turbo V8 found in the Cayenne. However, that is where the similarities end for the most part.

The Panamera offers a double wishbone front suspension with the MR dampers for sportier experience. The Cayenne gets a pass here because the people buying an SUV like that aren’t in it for the suspension tuning, but a Panamera customer may come to the Porsche dealership looking for a sports sedan that can do everything well. And there is where the Panamera starts to gain a lead on the Cayenne. The Cayenne has a respectable 10 different specs of the SUV with high performance models included. The Panamera? Has 21 different flavors.

One could say that is cutting the Porsche Panamera pie a little too thin but we have to acknowledge the demographic of buyers for these two cars. This is someone who could afford a 911 Turbo S at the high end, or a Cayman GTS at least at the bottom end, but they choose to go with the sporty 4 door Porsches. They are looking for performance, along with practicality.

On the other han, the Cayenne has lots of room and great performance, but the Panamera has more than twice as many options for this person to consider when buying both performance and luxury.

What car you pick is completely subjective, along with design, and experience. But the fact that I could have a Panamera with the E-Hybrid package, carbon ceramic brakes, and the sexy Turismo shooting brake body style solidifies my vote for the Panamera. In this case, bigger isn’t always better. Instead I would choose the saying “the more the merrier.”

See you in my next story discussing the Porsche 914, the car that got lost in the 1970s.

Tesla-Funded Research Reveals One of The Biggest Mysteries of EV Battery
Tesla Tesla Buyer Nets a Whopping $12,000 Discount After Asking for Reduction
END_OF_DOCUMENT_TOKEN_TO_BE_REPLACED