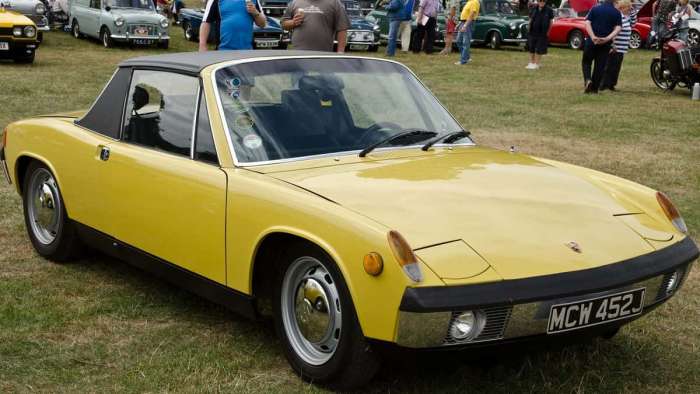 The 914 came in a wild time for Porsche as a company. Here, we discuss how it got lost in the storm of the 1970s and what it could have been if it survived.
Advertisement

In 1969 when Porsche announced that a mid engine car was coming, we can only wonder how excited the Porsche buyers may have been. There were rumors of the Italians going to mid- engine quite often in their coming road cars and the Germans at Porsche wanted to take a different approach. Porsche had already come out with the 911 as their flagship model along with the 356, both being rear-engine cars. Porsche didn’t need to spend all that much money on something that they weren’t going to base future models on. Thus, the 914 turned up and was instantly the odd one out.

VW was Porsche’s partner in crime with this project, co developing the 914 as an entry-level sports car. The body work was done by Karmann of all companies and still remains the most toy-like Porsche ever built. It’s first engine was a 1.7 liter 4 cylinder motor from VW producing around 85 hp-further solidifying its toy-like nature. A baby-engine like that doesn’t seem joy-provoking whatsoever until you realize that it was much more affordable than a 911 and catered to more audiences. By the way, also check out my Porsche Speedster story, which I think is a rare roofless car.

The Blueprints of The Porsche 914

The car proved to be a handling special with its extreme light weight and precise steering, being able to pivot around corners like it had rear wheel steering. And yes… it was slow. The meager 85 horsepower basically turned it into a more capable version of an MG roadster, but the 914 looked completely unique and proved to be a refreshing break from the same English roadster shape we had seen for decades at this point.

Here is where the waters get muddy. 1973 is upon us and Porsche unleashes the Group 4 RSR race car, forcing them to spend a lot of time and money on the homologation version of the 911, the Carrera RS. Porsche wanted to make street cars, but they REALLY wanted to go racing.

The 911’s of the time were the basis for their main race cars, dictating a lot of development time and investment. This meant that the 914 was to suffer. Porsche’s efforts for racing paid off as they dominated Group 4 with the 911 RSR and 935 cars as well as winning overall at LeMans 5 times in the 1970’s -3 of which were after the cancellation of the 914.

It was obvious that the 914 was not a necessity for the brand. At this point at the end of the 70’s and even before discontinuing the 914, Porsche had developed the 911 so much that lower trim levels of that sports car would do just fine by themselves. This decision saddens the 914 community as we would have loved to see a racier, 914 turbo in the 80’s. This brings us to the topic of the “what ifs”. What if the 914 had stayed in production?

The One That Got Away

Now a days, we actually do have an entry-level sports car in order before the 911, the Cayman. It is smaller, lighter, and cheaper than the 911 and can be more fun in some cases. Driving a 1975 914 probably wouldn’t be nearly as cool of an experience as a 930 Turbo of the same year, but the Boxster (Cayman’s predecessor) wasn’t the best car either in its first few model years. They took time and help from Japanese consultants to help the Boxster develop into a staple of Porsche’s lineup for 20 years. The 914’s story is eerily similar. They had help from another company to develop an affordable sports car that would underpin the 911.

The only difference is that Porsche gave up on the 914. At least now, the Cayman can go out and avenge its fallen relative.

Also see my latest story in which I discuss that Chevy may be building a Porsche GT2 RS killer as variant Of C8 Corvette.

William wrote on January 25, 2020 - 8:55am Permalink
It's easy to see how the 914 got lost in the 70s. What's hard to see is why so many are guessing over them today. When they were introduced, Porsche owners and everyone else, except people desperate to own a car with a Porsche badge looked at them for what the were. An ugly, underpowered Volkswagen without air conditioning. The 914-6 was a better car. But it was still ugly and now it was more expensive. For the same money, you could buy the beautiful Datsun 240Z with 150 hp and air conditioning. Writers like to Compare the 914 to the company's savior, the Boxster. But the Boxster was beautiful from the day it was born. It came with a real flat-six. All of the modern amenities. The 986 S had slightly more horsepower as a top-end that the original, legendary 930 widowmakers. There really is no comparison other than they are both mid-engine sports cars.
Tim wrote on January 25, 2020 - 8:56am Permalink
I always liked the Porsche 914. My neighbor down the street had one where I grew up.
Steve wrote on January 25, 2020 - 10:27am Permalink
I always liked them, and my dream car was a 914 - 6. They were too expensive now, so I got a 2002 986 S 6-Speed. I couldn't be happier.
Rob wrote on February 3, 2020 - 10:41pm Permalink
Hi Max, I appreciate your article on the Porsche 914, but since you were for a moment dreaming in hypotheticals with what if the 914 had been given more attention and advanced to more engine power, I wish that you would have included some information on the Porsche 914-6!

Panasonic Updates Profit Forecast, Noting How Much Tesla Batteries Help The Jump
2022 Porsche 911 GT3 Laps Nurburgring in 7:04 With Journalist Behind The Wheel
END_OF_DOCUMENT_TOKEN_TO_BE_REPLACED