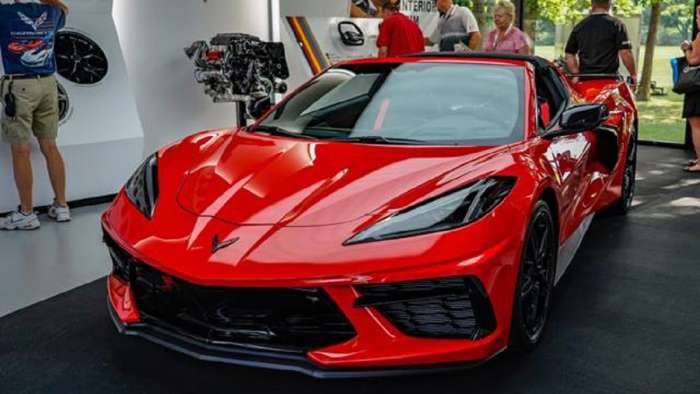 Now that Chevy has the mid-engine C8 Corvette platform, it would be no surprise that GM would be benchmarking the Porsche for performance as variant Of C8 Corvette is seen in camouflage with the Nurburgring King GT2 RS.
Advertisement

When the pictures surfaced of the obviously camouflaged C8 Corvette sitting next to a GT2 RS, rumours starting springing out of the community. The picture doesn’t confirm that GM had a GT2RS on standby and was testing it along with the Corvette, but it also doesn’t confirm that they weren’t. Speculation was also increased due to a spy video of the camouflaged C8 with an engine note that sounded like nothing we heard from the road version that has been out for a couple months.

The picture from Facebook seems to indicate a man on a laptop tuning the C8 or looking at data as it sits next to the GT2 RS that has another man next to it, who appears to be talking to people off camera.

There are arguments for both sides regarding if the Corvette team does have 911 GT2 RS that the company is using for testing.

By the way, the GT2 RS is the production lap record holder at the Nurburgring. So this means that the previously 490 horsepower C8 is potentially looking to outdo the 700 horsepower GT2 RS, of whom’s 991 platform has been in development for years. This is no easy feat. The sports car, and now supercar benchmark 911 posted a 6 minute 47 second Nurburgring time which leaves the young corvette lot of learning to do if it wants to take the throne.

Some believe that this could be GM using a GT2 RS to further develop a C8.R race car, but the GT2 RS is a production car. It most likely wouldn’t be of use to a team developing an endurance car. So why would the GT2 RS be there?

More speculation says that it could have been a GT2 RS owner that happened to be driving by and saw the GM team with the car and pulled over for a picture. This is a valid argument, however the amount of GT2 RS’s that are seen on the road is very sparse, and usually a corporate team like GM wouldn’t want a random person to come up and learn all about the secret covered Corvette.

No matter what this picture means, we still have the suspiciously loud and racey sounding spy video of the camouflaged Corvette that indicates GM is working on a ZR1 or Z06 version of the mid-engine car. Of all cars to be seen next to the covered C8, it just had to be the GT2 RS. We can now begin to believe that the team from GM is developing a very special Corvette that will turn a very fast lap at the Nurburgring.

See you in my latest story about the new Porsche Turismo-style Taycan spotted doing winter testing.

DeanMcManis wrote on January 27, 2020 - 10:27am Permalink
Yeah, this latest C8 Corvette test mule is proposed to be the next generation Z06, and it's unusual sounding engine is supposed to be a 600HP flat crank V8 that is a street legal version of the engine used in the C8R race car. It only makes sense that Chevy would get the top 911 GT2 Porsche to benchmark the next Z06, as that would be a prime track target to pursue and beat.