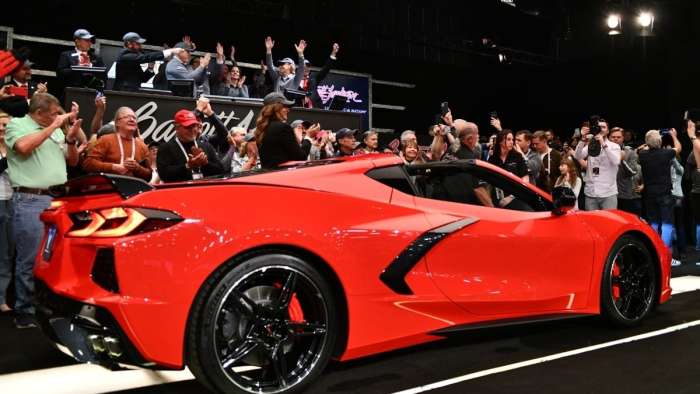 Barrett Jackson Corvette Mid-Engine Mania: Who Is Paying $3 Million for the 1st 2020 Vin

The 2020 Chevrolet Corvette Stingray Vin # 0001 was the star of this year's Barrett-Jackson auction. We have details on who is paying $3 Million for the first mid-engine Corvette and who will be benefitting from the charity auction. Here is what we know about this Barrett Jackson Corvette.
Advertisement

There is no question that the 2020 Chevrolet Corvette Stingray is the most anticipated American-made vehicle in the last ten years. It will be the first mid-engine Corvette. The mere existence of the car has been the subject of rumors and speculation for years. Now, the vehicle will finally be going into production. It was recently delayed by the UAW’s 40-day strike against the automaker. Saturday night, a bidder paid $3 million at the Barrett-Jackson auction, in Scottsdale, Arizona, for the opportunity to get the very first commercial production C-8 Corvette Stingray.

General Motors says the history-making VIN #0001 mid-engine Corvette will be a black-on-black 3LT with the Z51 performance package.

The winning bid was placed by Rick Hendrick, founder and CEO of Hendrick Companies.

Who Is Rick Hendrick?

“I am the number one Corvette junkie in the world,” said Hendrick. “Thanks to Chevrolet and Barrett-Jackson, because they always pick charities that are so good and help so many people.”

If you love cars and racing, you should recognize his name. He is THE Rick Hendrick, the owner of the Hendrick Motorsports. His NASCAR teams are top-notch. His drivers have won 12 NASCAR Cup Championships over the years. If you were watching the Barrett-Jackson coverage on Saturday night, you would have seen former NASCAR Champion Jeff Gordon sitting next to Hendrick during the bidding. Gordon drove for Rick Hendrick and now is part owner of the team. Hendrick is also known for owning the Hendrick Automotive Group, which reportedly has 98 franchises and 10,000 employees in 13 states.

General Motors Chairman and CEO Mary Barra was in Scottsdale and on the stage during the auction. She spoke of how proud the Chevrolet employees are of the new Corvette and how pleased she is that the proceeds of the sale will benefit a Detroit children’s charity called The Detroit Children’s Fund. A number of GM employees were on the stage with Barra, including some that will be building the Corvettes.

“Reaction to the mid-engine Corvette has been extraordinary,” said Mary Barra, GM Chairman and CEO. “It’s both humbling and exciting to harness that success and provide the proceeds to the Detroit Children’s Fund.”

Who Benefits From the $3 Million Barrett Jackson Corvette Sale

The Detroit Children’s Fund is a non-profit that spends money to help Detroit’s school children receive better educations. The fund targets underperforming schools and buys equipment and supplies to help level the playing fields. DCF will also use some of the money to recruit, develop and retain leadership and teachers.

Jack Elsey, the DCF’s executive director said “The proceeds from this auction will help improve public education in Detroit and, as a result, give thousands of young Detroiters a brighter future. We cannot thank General Motors enough for their commitment to DCF and the children of Detroit.”

The production of the 2020 Corvette Stingray is scheduled to begin at GM’s Bowling Green Assembly Plant in Kentucky in early February. The Corvettes should start being delivered to customers before the end of February. While the strike ended late last year, the Bowling Green plant had to keep producing the older model Corvette to fill about 1000 orders. Once those vehicles were completed, they could start retooling the plant for the all-new model. The 2020 Chevrolet Corvette has already been honored as the 2020 Motor Trend Car of the Year and the 2020 North American International Auto Show Car of the Year.

Mary Conway covered the Detroit Three for more than twenty years for the ABC affiliate, in Detroit. Her affection for the Motor City comes naturally. Her father ran a gas station while Mary was growing up, in Wisconsin. Follow Mary on Twitter at @maryconwaymedia. Check out more of Mary's stories at Torque News Corvette news coverage.