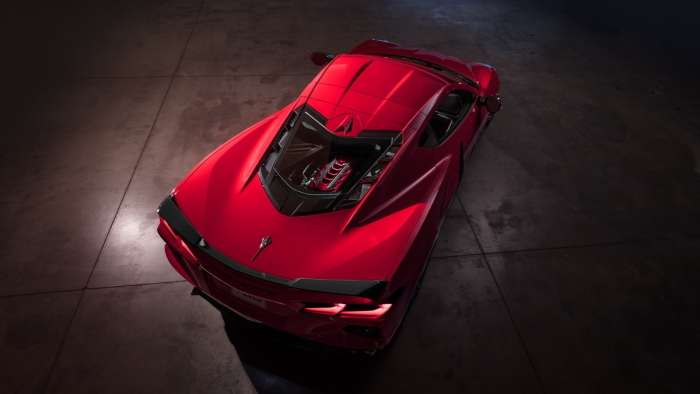 The most anticipated Corvette in decades will be used to raise money for poor children.
Advertisement

The all-new 2020 Chevrolet mid-engine Corvette has been the talk of the car world for years. First, its existence was rumored then there were murky videos of a heavily camouflaged vehicle testing on exotic tracks. Finally, Chevrolet confirmed the new generation would make its debut last July. Now, Chevrolet has confirmed that the very first production 2020 Chevrolet Corvette Stingray will be sold at the Barrett-Jackson Scottsdale auction, in January of 2020. All proceeds will benefit the Detroit Children’s Fund. The iconic car is expected to sell for millions.

“We’re honored that Chevrolet has selected our 2020 Scottsdale Auction to sell one of the most historically important sports cars of our time,” said Craig Jackson chairman and CEO of Barrett-Jackson. “The 2020 Chevrolet Corvette Stingray ushers in a new era of design and performance that will long be regarded as a milestone for America’s sports car. Witnessing the sale of the first production 2020 will, without a doubt, be one of the hallmarks of next year’s Scottsdale Auction. What makes this sale even more exciting is that 100 percent of the hammer price will benefit the incredible students across the Detroit area.”

One of Many VIN 001 Vehicles Auctioned Over the Years

Barrett-Jackson previewed the 2020 mid-engine Chevrolet Corvette auction during its auction this weekend in Las Vegas, Nevada.

“Over the years Chevrolet has partnered with Barrett-Jackson to raise millions of dollars for charity through the auction of many VIN 001 vehicles,” said Sean Finegan, Chevrolet Manager of Corporate Events. “Since its debut in July, the 2020 Chevrolet Corvette has raced its way into the hearts of performance enthusiasts around the globe. We’re excited to team up with Barrett-Jackson again and auction the first retail production Corvette in Scottsdale in January to benefit Detroit Children’s Fund. It’s only fitting that VIN 001 begin its legacy on the block to help build up and invest in the lives of students across this great city.”

The 2020 Corvette Stingray that will be going up for auction will have the Z51 performance package. It will feature Chevy’s 6.2-liter V8 LT2 engine. During previous auctions, Chevrolet has allowed the buyer to choose their color scheme for the VIN 001 vehicle. The all-new 2020 Chevrolet Corvette is expected to produce 495 horsepower and 470 ft./lbs. of torque. The mid-engine Corvette will have the most power of any standard Corvette.

The Detroit Children’s Fund is dedicated to helping the less fortunate schools in the Detroit area. The Fund often helps schools buy computers and other technology, as well training programs, that poorer schools might not be able to otherwise afford.

Often, high rollers like Rick Hendrick, who founded Hendrick Motorsports, have generously bid on the one-of-a-kind vehicles, driving the prices into the millions of dollars. The iconic all-new 2020 Chevrolet Corvette is expected to be one of the top all-time sellers.

“Barrett-Jackson has set the stage for the sale of some of the most iconic VIN 001, prototype and first production vehicles of our time,” said Steve Davis, president of Barrett-Jackson. “We couldn’t be more proud to continue that tradition with help from Chevrolet and the sale of the first retail production mid-engine Corvette to support the wonderful kids of the Detroit area. This beautiful Corvette Stingray is going to set new standards in the sports car world, and we couldn’t be more excited to be a part of its history. If you were looking for a fantastic reason to be in Scottsdale next January, this is it.”

Tsingshan's Threat to Tesla: EV Maker Is In Battery Crosshairs
Tesla-Funded Research Reveals One of The Biggest Mysteries of EV Battery
END_OF_DOCUMENT_TOKEN_TO_BE_REPLACED