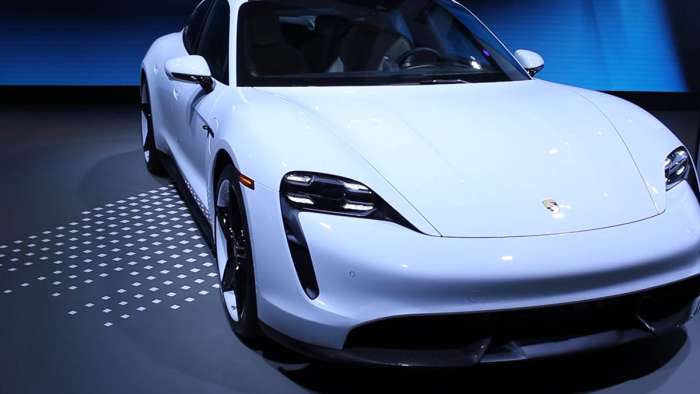 Pictures indicate that Porsche has a Taycan Wagon coming, and we hope it drives as good as it looks. here is a look at the Porsche Taycan variant.
Advertisement

It seems like just yesterday that the automotive world was losing their minds over the Taycan Turbo S and comparing it to the Tesla Model S. But now we have another Taycan to drool over and then wait for anxiously. A Taycan Sport Turismo. Pictures have recently surfaced of a car with the almost exact front facia of the current Taycan sedan but with a twist. It has the long body from the Panamera Sport Turismo.

The pictures available show us that the testing is being done at a snow facility with the featured car wearing weather appropriate shoes. This is nothing out of the ordinary at almost all cars are tested for conditions like ice and snow, especially when they have snow/ice drive modes. This supposed Taycan Sport Turismo will most likely share the same battery packs as the sedan. A 523 horsepower motor in the 4S all the way up to the 751 horsepower (equivalent) battery pack in the Turbo S.

With designing a more all-around variant of the Taycan sports sedan, a reevaluation of its behavior is necessary. With new body panels and possibly slight powertrain changes in terms of driving modes, we can expect this new version to be a capable outdoors machine. Several of the pictures accentuate the larger styling cues of the car.

The front grill has more surface area and the car rides a solid inch and a half higher than the sedan does. Not only is altering the exterior important for a wagon like this, but testing the powertrain for low temperature operation and dealing with melting snow. It seems silly to worry about an electric motor being affected by driving in the snow as it doesn’t have big air intakes and channels that lead to the engine internals, but considering the young nature of this technology, further testing for an off-road capable wagon makes sense for Porsche to research.

The rear of the car was covered in snow, making the badging -if there was any- invisible to spy cameras. It’s almost comical to think that the snow conveniently covered the rear end and Porsche just wouldn't have cared otherwise. They do care. Porsche always cares about everything to a miniscule degree, and the cars end up better for it. For example, the Panamera Sport Turismo. This car is well behaved and more importantly, extremely attractive. The Taycan spy photos keep our wagon senses tingling and keep us on the edge of our seats for a beefed-up, capable, and electric Turismo that will wear the Taycan name.

See you in my next story about the new 2020 Porsche GT3 RS rumors and what we know.

You can see some pictures of the Turismo-style Porsche Taycan at Motor1.

Julio wrote on January 28, 2020 - 9:52am Permalink
I don't like it at all. We have already Audi, Mercedes, BMW. Why do we need a Porsche Turismo?
Max wrote on January 28, 2020 - 11:42am Permalink
Good point, While audi, bmw and mercedes do offer some good wagons, non of them are all electric. Thats why the Taycan Turismo is significant, forging a new class of EV
DeanMcManis wrote on January 28, 2020 - 12:05pm Permalink
I like the design. Even though station wagons are relatively unpopular here, given the choice I would prefer driving a sporty car with extra carrying capacity, over a SUV. The biggest downsides that I see for the touring Taycan are having a relatively limited (200 mile) range, which is likely totally fine for city use, but if you are planning to travel long distances into the country, you wouldn't want to get stuck far away from a charger. Secondly, is the $150K-$200K starting price for the Taycan Turbo ( and S), where you could buy a nice, sporty EV, and ALSO buy an EV crossover too for the price, having less concessions for each of them. Who knows? The Taycan is getting some rave early reviews, so it may well be on many richer folks shopping list to buy.