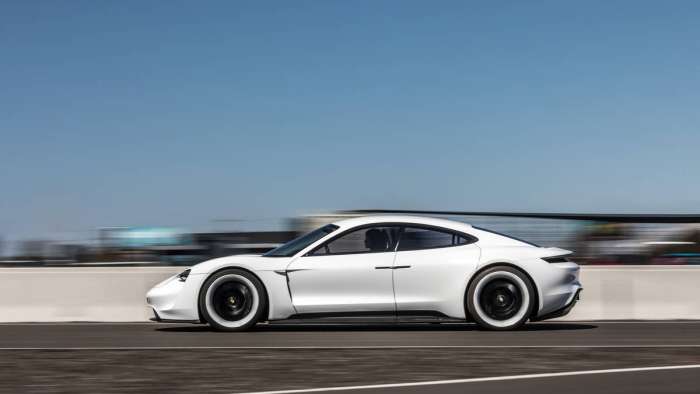 The new Porsche Taycan is expected to be able to charge at 350 kW. Would Tesla Model S cars be able to support that kind of charge rate as is? Could Porsche and Tesla partner together to handle the battery issue?
Advertisement

Torque News had earlier reported that Porsche intends to build 20,000 all-electric Taycan models and that it's all about charging. Now, the German magazine Automobilwoche reports that Porsche has now approved the expansion of the production capacity of Taycan to 40,000 units per year. This is a very significant development for Porsche and a big new for the EV industry as Taycan, with the rate of 350 kW charge rate, is theoretically able to charge the car to 80 percent in 15 minutes.

I was following the new in online Tesla forums and Facebook groups and noticed a concern. People are questioning what long term battery damage will be done when charging at 350 kw rate.

I am sure Porsche engineers have thought about it as well. There shouldn't be any long-term battery damage if they implement the batteries using graphite. There is a battery chemistry out there that allows for high voltage charging to 650kWh without accelerated degradation. See my previous story, discussing Graphite’s role in EV battery production and industry-wide expectations, an interview with the president of Berkwood Resources Ltd. who told us that many battery and auto manufactures have reached out to them and are waiting for their graphite resource report to come out.

Who knows, may be Porsche is one of them. In fact, three days ago, on January 16 Berkwood Resources announced that it discovered large Graphitic outcrops and completed Phaze 4 drill program. To view a new video of the Phase 4 drill program please visit Vimeo.

Tesla owners say the current Model S and X vehicles top out at a maximum of 120 kW charge rate. They are waiting to see what Porsche does with Taycan models.

Others are very skeptical of Porsche. They think this simply is a rumor and speculation until proven otherwise. In other words, according to them, this is just more words from a spec EV producers who have produced Zero cars.

Some people say to become evenly competitive with ICE cars EVs will need to get full charged in the 2-5 minute window. Basically the time it takes to fill up your car with gasoline. You know replace fuel pumps with charging stations. That seems many miles from where we are now but possible.

Others say it doesn't have to be that quick. When you take a break, you go to the bathroom, get a snack, rest your eyes a little. You don't only take a 2-4 min break. 10-15 min charge time is plenty good.

"I don't think you can make a direct comparison between gas stations and EV charging stations. Unless you are traveling long distances, there is no advantage a gas station has for someone who travels less than 150 miles per day and has home charging. I love the convenience of charging my Teslas overnight in my garage and don't miss freezing my ass off and inhaling gas fumes at a gas station. I think Tesla has made EVs desirable and word is finally getting out that it's fun to drive one. EVs have other advantages over ICE models but most people aren't yet aware of these advantages. Yes, on long trips ICE cars make better time, but for daily commuter miles, the EV has the advantage. I guess we'll have to wait for the actual Taycan specs and evaluate it from there. I hope the Porsche is everything they claim it to be. As has been stated already, some healthy competition will be good for all involved. As a side note, In the latest tear Model 3 teardown, the charge cable is much thicker than in the older Model S/Xs. Maybe there could be an ungraded Tesla Supercharger coming soon?" writes a user named Tony in Tesla Model S Owners group on Facebook.

In my opinion EV charging speed of 10-15 minutes would be fine.

I am not sure how the Tesla batteries can handle it without degrading quickly. If it could have been done I think Tesla would have already done it. Why is Tesla waiting if it can be done? I am a bit skeptical. Maybe they plan on marketing it 350 kw, but only for the first 50 or miles. But who knows Tesla's real capacity? Do you remember that few years ago when due to a hurricane Florida was evacuating Tesla remotely enabled longer ranges for Florida Tesla owners? This raised important question as to why do you limit it if it's possible to increase the range remotely.

Yet, this could be a competition issue too. Who has better engineers Porsche or Tesla? Who can answer this question in the comments below? While Taycan will be its first EV, Porsche has been making cars for 88 years. This is battery management and charging. Tesla has a head start there. However, Porsche has got years of real data collected - probably more than every other automaker combined.

At the end of the day the batteries can only accept a certain amount of power without overheating. But who knows? May be Graphite can increase this capacity.

This may be tough on any Li-ion battery, especially one that doesn't have a durability track record. It also will stress local grids at times, but with new battery technologies this may change.

To conclude, as one Tesla owners said it's all about the supercharger network for road trips. Unless Porsche partners with Tesla no one is going to buy into that strategy. Could Porsche Tesla battery partnership be one day revealed? What do you think?

kent beuchert wrote on January 22, 2019 - 10:40am Permalink
Lots of problems with this article. Porsche has already demonstrated 350KW charging with theTaycan. And recently BMW et all demoed a 450KW charging. Also, GM is working for a 500KW charging a capability in a year or so. GM and VW Group EV engineers probably know about 1000 times more than this rather ignorant article writer. They are on the hook for any engineering failures, so it's hard to swallow the idiotic notion that they will install sure-to-fail engineering technology on something as expensive as a battery pack. Get in touch with the real world, fella. And, contrary to the writer's Land of Oz, recharging at a gas station seldom involves freezing temperatures and I don't inhale any gas fumes at my gas station - the people there shut off their engines when they refuel. The biggest idiocy displayed here is the notion that DC fast charging is the common method. It is for those who cannot charge at home, but everyone else would be pretty stupid to pay the prices for DC fast charges unless they are in a bind. Electric car owners are greedy folks - they accept $7500 and more from their neighbors to subsidize their vehicles, which provide very little benefit to the environment. They also are tax evaders - they do not pay road taxes which constitute a very significant portion of the price of gasoline. Their extremely heavy electric cars do far more damage to our roads than gas powered cars can ever do. Tesla recently raised their Supercharger rates an astounding 33%, having raised them less than 12 months ago. Chances are that recharging your car at a Supercharger will cost you more than fueling an equivalent gas powered car. If the road tax evaders driving their EVS are forced to pay what they owe in road taxes, it would never be cheaper to fuel an EV if using DC fast public chargers.
Mark Kolb wrote on August 10, 2019 - 11:42pm Permalink
Finally someone with some sense and logic about EV technology. Thanks for your input.
Bobby Likis wrote on January 24, 2019 - 5:14pm Permalink
i began reading your response and liked what you had to say re Porsche and BMW companies already ahead of this article's main point. But then you got into rick folk taking consumer monies with no real value applied to a better environment and I stopped there. While I am a 47 year veteran small business owner, the truth is (if you can handle it) gov subsidies were responsible for the first air mail flight. While I openly admit I have disdain for paying income tax i still pay it as I believe our country is the best on the planet. And it is my privilege to support new technologies...I do so enjoy my 8+ iphone, my new safer-designed car and my doctor's suggestions to use newer treatments vs. old. Road Use taxes will certainly be applied down the road as we close in on mass sales of REV vehicles. So be it. Henry Ford sold ethanol-powered cars long before alternative fuel blends became contentious for naysayers. Today, ethanol fuels are commonplace and cleaner than gasoline. We have much to be thankful for. My humble opinion.