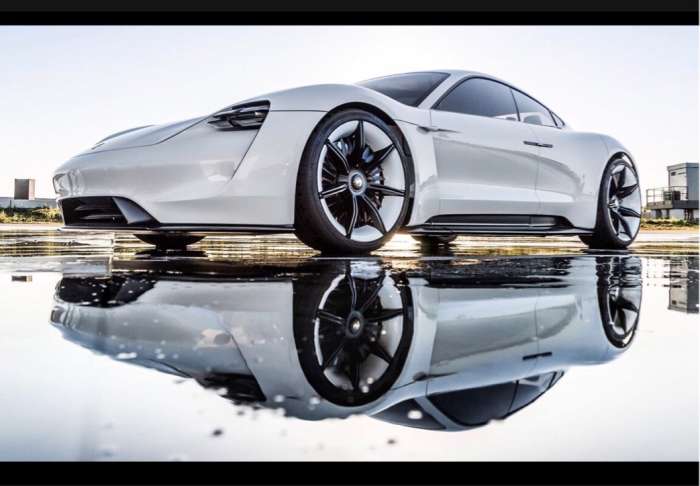 For a Porsche Performance Electric it’s all about the Charging

In setting up its charging network for its upcoming flagship all electric sports saloon, the Taycan, Porsche gives clues as to how premium, luxury, and performance brands outside of the Tesla universe will be treated until as such time as all brands have access to everyone eles’s networks.
Advertisement

As with everything else in life, you exact and pay a price for preferential treatment when it comes to things like airline seating, hotel and cruise ship accommodations, theater and stadium performances, car rentals, credit cards, even VIP front of the line access to attractions at amusement and theme parks, and so it shall be with electric car charging, as Porsche has devising a VIP access system to various network chargers for their customers. In doing this, the legacy car companies are giving us all a glance as to how the luxury and performance brands will treat their customers when their all electric models roll out in just a few months or years. Expect customers who drive things like a Porsche or a Bentley or a Buick or even a Mini to be treated differently or special than someone just driving a Ford or a Chevy or Honda when they pull up to some kind of charging station.

Life as an BEV driver makes recharging on the road a little tricky, that you have to be prepared, and have options. The fact of life for a BEV owner is that you have to have in your possession multiple charging network cars and have them activated right at the charging station. This can be a little inconvenient and tricky for the BEV driver but a necessity especially if you’re doing long distance driving to need access to a fast charger. One of the selling points of buying a Tesla is that with their sole dedicated Supercharging and soon to come Megacharging Network, Tesla customers have their own established network of Tesla Chargers, that all they need is their card and an app to recharge. Now here comes Porsche onto the BEV scene with their new electric car. They want to adopt and improve what Tesla is doing.

Porsche explains from their website: Otmar Bitsche, Director of Development Electrics, Electronics, Electromobility at Porsche: “Someone who wants to drive from Munich to Hamburg in an electric vehicle today needs multiple cards with which they have to authenticate themselves at the charging stations. Porsche eliminates this authentication rigmarole for customers by establishing contracts with all of the charging station operators, so the customer only needs one charging card that is accepted everywhere. And they can also count on a guaranteed electricity price that applies throughout the entire country. Customers of the Porsche charging service ultimately receive just one transparent bill from Porsche,” he said.

Porsche is using the IONITY network to have their customers recharge their vehicles. This is what car companies are doing to save money, by pooling resources to make a charging network that they all can use. IONITY is part of ChargePoint which is a collaboration by BMW, Cadillac, Chevrolet, Daimler, Energica, Fiat, Hyundai, Nissan, Mercedes-Benz, Smart USA, Toyota, and Volkswagen. ChargePoint also provides other services like residential and business chargers for home, apartments or condos, or businesses. These brands will have access to what is considered so far to be the largest charging network across the US and Europe.

Porsche recognizes that a luxury performance brand having its own exclusive sole dedicated charging network really does enhance and exclusivizes the customer experience. It is the showcase feature of the Tesla charging network, especially for long distance driving. So Porsche is looking to take this network setup a step further by taking advantage of being outside the Tesla universe, by setting up fast charging through a program called ChargingPark as a fast charging network, and where not available to set up in smaller or restricted size locations, ChargeBox. Porsche has already started setting up Charging Parks, the first one in Berlin. Like the thought that went into the design and function of a Tesla charger, so is the case with ChargingPark and ChargeBox.

From Porsche’s website, Michael Kiefer, Director of High-Voltage Systems at Porsche Engineering: “We have invested a great deal of effort in the issue of user-friendliness. Our charging stations even look different than the predominant ones seen today. They aid the customer through a design that guides the cable cleanly. We’ve also designed the overall system for the lowest possible power loss. That pay-off in terms of operating costs and the potential operator of the Park stands to save a lot of money.

“We have two different variants, the Charging Park and the ChargeBox. The Park is designed for locations with more available space in which a very high volume of charges is to be expected, 24 hours a day, seven days a week. With a small compact station, however, a charging park is possible in the city as well, for example in a residential area. For all areas with extreme space constraints, there is our second variant, the ChargeBox with an integrate battery. It can be connected to the normal low-voltage grid and enables fast charging in spite of its compact dimensions.”

So when the Taycan takes delivery next year to its first 20,000 customers, they will have all this available to them, and access by using just one card, whether it’s the IONITY ChargePoint, or ChargingPark/ChargeBox networks. Porche won’t be making electric tractors, but it is looking to enhance its network by adding a high output charging apparatus that will cut down charging time to less than 15 minutes for 170 miles. Tesla calls their system Mega Charging that will be used for its BEV tractor.

While I have you here, let me give you the latest news on the Taycan:

Time flies. It’s hard to believe that it’s been three years since Taycan made its debut at the 2015 Frankfurt Auto Show and we are now down to months, even weeks, before the car literally rolls off the assembly line as production of the electric car is expected to be done at the company’s Zuffenhausen facility in Stuttgart, Germany, the House of 911. In making the car right next to the iconic 911, Porsche is sending a message to the world that whatever stigma sticks to an electric car, that will not be the case with this electric Porsche, as the Taycan is in every sense a Porsche, to be “driven like a Porsche.” This car will perform in all aspects like their iconic gasoline cars with the exception instead of refueling with gas, you’re refueling with electricity.

You can tell that Porsche is creating excitement and anticipation not only in finishing preproduction at Nurburgring, but ramping up production and taking preorders while doing marketing. At first dealers were taking names and numbers to make a preorder list, and now Porsche has a new Deposit Option Program where you can leave a deposit or at the very least get yourself on the mailing list to get updates on what’s going on with your order. You can’t build a Taycan yet on the website, but you can certainly start the order process of your Taycan with your dealer contacting you by clicking right here. Welcome to history as it happens.

Soon we’ll be focusing on the CUV variant coming soon: