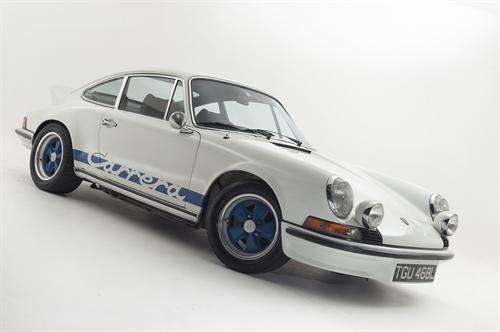 Porsche 911 Carrera RS 2.7 Touring with matching numbers to be auctioned

On the Porsche 911's fiftieth anniversary, a very rare racing 911 Carrera that was never seriously wrecked will auction. This could be the most expensive Porsche 911 auction ever.
Advertisement

Back in 1973, Porsche created what many consider to be the most perfect 911 ever made. And they made just 94 of them.

The 1973 Porsche Carrera RHD RS 2.7 Touring was a specification car for the UK market that was built specifically for street-legal racing and rallying. It instantly became a popular choice for racers and recruited by many for the purpose. Of course, one of the perils of the racing life is that a car rarely survives it intact for very long. Most of the 94 built were wrecked, rebuilt, parted out, or otherwise lost their original chassis and engine block numbering.

One did do so, however. Owned by well-known Cypriot rally and rallycross driver Dimi Mavropoulos, the specimen pictured above was raced a few times by the famed Group B Audi Quattro driver, who then sold it to a collector. It passed through another pair of hands, then back to the first buyer, and finally to Autofarm, an independent Porsche specialist whose owner, Josh Sadler, had particular interest in this machine. Now they are offering it up for auction.

“Performance cars, especially ones that are now 40 years old, get damaged, repaired and have key parts swapped around,” explains Sadler. “Whilst it has covered 135,000 miles, this particular car is truly original, having never been modified or suffered any significant accident damage.”

Because this is the 50th anniversary year of the Porsche 911, Sadler believes that interest in the car may never be higher. He says that after 32 years of ownership, he's finally ready to let it go to the right buyer.

The company is currently taking bids on the car and plans to pair it with its final buyer, if one is found, at the Goodwood Festival of Speed.