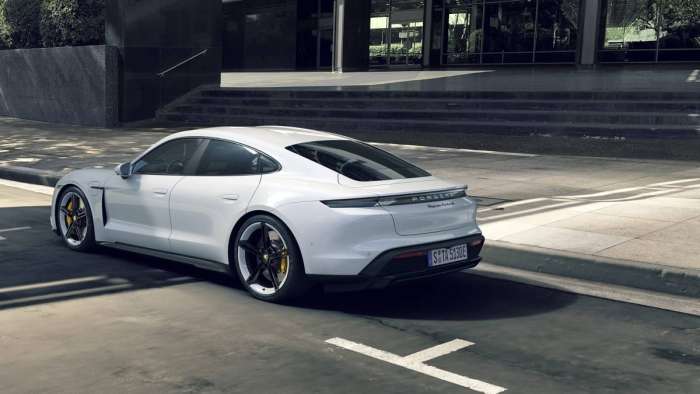 If having the first electric Porsche wasn't cool enough, now you can spec your Taycan to be completely unique.
Advertisement

Electric vehicles have been styled quite differently than gas powered cars for decades, as companies continue to use the ultra-modern designs to symbolize the car’s intended purpose. As of recently, electric cars have been taking the development of their technology very seriously, and the styling has improved along with it.

Thus, when an electric car becomes a luxury vehicle like the Tesla Model S, Audi E-Tron, and our featured Porsche Taycan, the choices for styling get held to a much higher standard. For Porsche, its Exclusive Manufaktur is creating possibly the best options list for any car on sale today offering about 600 individual options to choose from.

I assume in my own insanity, that since Porsche doesn’t have to spend as much time installing engines and mechanical bits into the Taycan, they could spend a bunch of money on customizing it. Yes, it is just a theory, but once you learn how much they have done in their Exclusive Manufaktur, it might make a little sense.

The basics include their three new “Sport Design Packages” that all offer a plethora of little details. The shape of the front valance can be modified to one of multiple styles depending on your preference. The door sill panels are also fully customizable with different shapes and colors. They will match that door sill with the side skirt fins on the exterior for you as well or finish it in black or carbon.

Porsche Exclusive Manufaktur has gone even deeper in ensuring their customers a completely customizable car. The storm trooper headlights that were specially designed for the Porsche Taycan have also undergone some creative oversight. The team will install Glacier blue colored membranes in your daytime running lights to change the color. I can’t imagine the meeting they had with the DOT, but all I know is that those runners would look good on my hypothetical Dolomite Silver Metallic Taycan Turbo S with matching blue seat-belts. Oh yeah, they can do that too.

Porsche offers new interior styles that are different from the stock combinations available.

Graphite Blue, Truffle Brown, Lime Beige, Crayon, Blackberry, Meranti Brown, Slate Grey and Bordeaux Red are all colors that your seat-belt could be as it lies upon your new carbon fiber door trims. The Carbon Package would be the option responsible for the front and rear carbon door trim and center console, making the seat-belt colors pop even more. The amount of customization is impossible to encompass in one article but I must include the wheels as a last word.

These optional wheels are milled from pure carbon fiber and have huge aeroblades running off the end of each spoke, Gorgeous.

Porsche called for a remodeling of the Exclusive Manufaktur plants exactly as the Taycan EV had hit the production line. They wanted their symbol of the future to lead the new division and spark popularity in the product. The generation that is becoming of age this decade will be young people who grew up on customizing cars in video games and in online configurators, making a product like the Porsche Taycan extremely desirable for its sense of personality and uniqueness. Tesla lets you name your car and call it by its name when talking to it, it is this kind of user-friendliness that will sell cars in the future.

Johnson wrote on January 31, 2020 - 9:47pm Permalink
That’s pretty much the case for just about every Porsche model currently being sold if you’re willing to factory order it.
DeanMcManis wrote on February 3, 2020 - 1:51am Permalink
German performance/luxury automakers have long known that their customers want something unique and special, and importantly they are willing to pay big bucks to be different. The Taycan Turbo S is already plenty fast, offering comparable acceleration to a Lamborghini Huracan, but for people who don't know about the Taycan, they could easily be mistaken for a Panamera. So with the money that they are saving over an Italian exotic they can customize their Porsche to their heart's content.