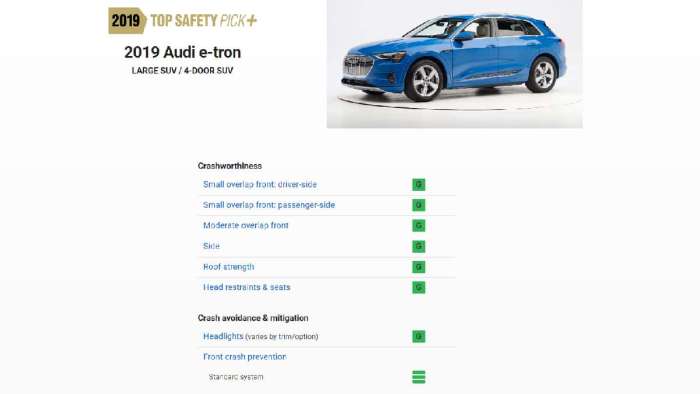 With Tesla's Model 3 testing now underway, the Audio e-tron jumps ahead of Tesla by being the top-rated BEV for safety.
Advertisement

The e-tron has effectively run the board in the safety test. It earned the highest score on every test. That includes the small frontal overlap test on both sides (a test that NHTSA does not conduct) and also the highest marks in its standard trim for headlights and active safety systems. The e-tron also earned the top score for child safety seat anchors, known as LATCH. There is no higher possible rating given by IIHS.

The e-tron is a new product from Audi that is powered only by electricity. This is called a battery electric vehicle (BEV) by those few who closely follow the shrinking electric vehicle industry in the U.S. It has a 74 MPGe rating (the same as the Mitsubishi Outlander PHEV crossover) and an estimated range in moderate temperatures of 204 miles. The e-tron is a midsized crossover with 29 cubic feet of cargo space behind the rear seats and 57 cu ft of cargo volume with the rear seats folded. Thus, the e-tron is a much larger and more spacious vehicle than the Model 3. The two are differently-sized and shaled vehicles.

The Audi e-tron will start under $80K and rise to nearly $90K with popular options. With its towing package, it will be capable of towing 4,000 pounds.

You can view the entire set of data from the IIHS test here.

The Tesla Model S has been tested twice by IIHS and twice failed to meet the criteria for the Top Safety Pick Plus designation in multiple areas. Tesla opted not to respond to IIHS's request to fast-track testing of the Model 3.

There are many reasons that vehicle experts consider the IIHS test the most rigorous vehicle safety test in America vs. NHTSA testing. The IIHS crash tests are performed at higher speeds and IIHS has crash tests that NHTSA does not perform. IIHS also has a detailed headlight evaluation and tests forward collision prevention systems for consideration at two different speeds. One way of thinking of vehicle testing is that NHTSA is the junior varsity to IIHS' varsity testing.