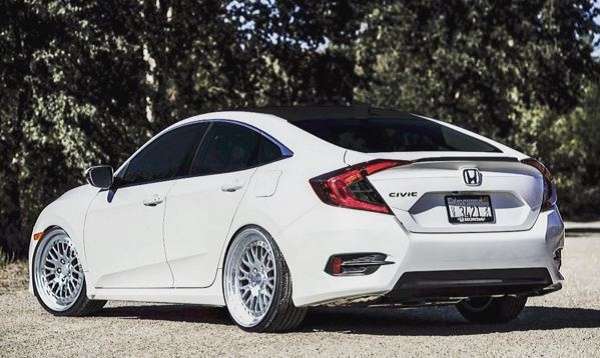 Our friend Michael Accardi of "10thcivicforum.com" was kind enough to share with Torque News a couple of very cool Custom 2016 Civic Sedan renderings. 2016 Honda Civic is ripe for personal customization.

Honda engineering and design has produced the most dynamic Civic in the marks 40+ year history, through exceptional body style, dimension and fat-attitude. When looking to the numbers, we believe 2016 Civic to be the greatest purchase value in the economy compact sedan segment.

With a base MSRP of well below $19,000, exceptional active and passive safety features, expanded personal device connectivity and best in class power and fuel economy, Civic kills it!

Looking to the rendering: Both cars look great fat, while sitting on airbags, love it! Featuring ‘stuffed' 18 inch (I’m guessing) custom alloy wheels and low profile tires, the on the ground positioning of 2016 Civic Sedan, accentuates the European-inspired body line of Honda’s next best seller.

It’s a great look, and as we head off to 2015 SEMA, we anticipate catching view of what American Honda has lined up for Civic as to dealership available personal customization. We know that Asian metric ‘Tuners’ are big this year at SEMA, as Acura, Honda, Kia, Mazda and other makers hit the 2015 SEMA Las Vegas show floor running.

We like the production premium 17” cookie cutters available for 2016 Civic Touring, but there’s always room for personal customization. Turbo anyone? Our Thanks to Michael for the heads up! This is an exciting time to be a Civic fan. We look forward to the release of the 2016 Coupe and Coupe Si in late November 2015.