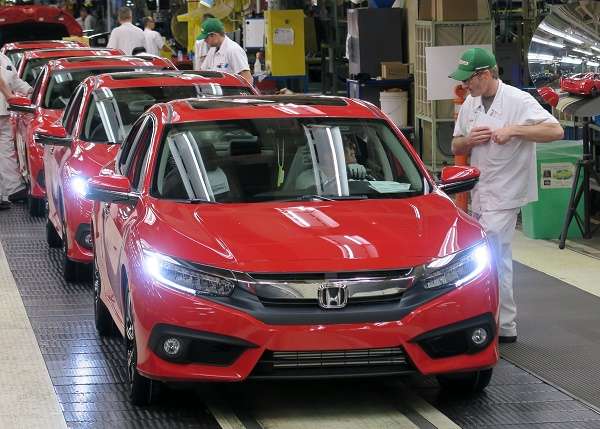 For 2016, Honda Civic comes out swinging with superior horsepower, torque and fuel economy. It's what's under Honda's hood that sets Civic well above the competition.
Advertisement

Granted, with today’s gasoline pump price flirting with $2.00 per gallon or less in much of Canada and The U.S., consumers may look past the economy class automobile when considering fuel economy. looking to unprecedented light truck, SUV and crossover sales, fuel economy has taken a back seat to comfort, spaciousness, perceived safety and horsepower as consumers mentally weigh their next new car purchase.

*None the less, Honda Civic remains the best selling retail compact sedan in North America, and has done so for 9 years running. Yet Civic has taken a hit as to sales volume. For 2015 as car buyers shift their interest to crossovers and light trucks, the compact sedan segment has fallen off a bit in sales volume, with Honda reporting a -1.5% sales decrease year to date for Civic.

In rolls 2016 Honda Civic Sedan, the most dynamic, powerful and fuel efficient Civic in the icons four decade production run.

When comparing engine specifications and estimated EPA fuel ratings, we find 2016 Honda Civic to be one of the most powerful and fuel efficient offerings in North America’s economy compact class, higher than Hyundai Elantra SE, Mazda3 Touring and Toyota Corolla LE. Yet American Honda Motors holds the base MSRP of this manufactured in Canada superstar to within $150 of last years offering.

Granted, engine power and fuel efficiency is but part of the equation when penciling in ones often personal justification for purchasing a new car or light truck.

As shared earlier in this Torque News Review, in addition to being the most powerful and fuel efficient compact sedan available to North American buyers, Civic offers superior road handling, while featuring exceptional passive and active safety features, accident avoidance technology, greater cellphone connectivity, personal-entertainment integration and the coolest upgraded drive and ride environment in the history of Civic.

American Honda lists a base MSRP of $18,640 for the basic Civic LX Sedan 2.0L 6 speed manual transmission, to MSRP $26,500 for the fully loaded 1.5 liter turbocharged Touring Sedan with CVT transmission. There are 15 variants listed for 2016 Honda Civic Sedan including the near future Civic turbocharged PZEZ gasoline hybrid electric. We look forward to driving that car.

Engine specifications at a glance

Stated MPG: 31/42/35 CVT. Note: The 6-speed manual transmission is currently available in base Civic LX only.Civic fans will see it coming down the line in the Civic Coupe, Civic Si Coupe and Sedan, and the manufactured in Surrey Civic Hatchback, and long anticipated Civic Type-R.

Looking to the competition, base MSRP and base-model standard features, 2016 Civic may represent the greatest lease or purchase value for those buyers shopping for a high quality yet affordable not so entry-level compact sedan.

Good looking, fun to drive and comfortable, 2016 Civic leads to compact segment in power and fuel efficiency, a not so small part of the Civic success story.

Joel Stanfield wrote on October 28, 2015 - 7:15pm Permalink
The 2L is i-VTEC on Honda site and the 1.5L, only variable phase control, on Honda site does not use i-VTEC?
Parks McCants wrote on October 29, 2015 - 12:02pm Permalink
Welcome Joel [ Variable valve timing and electronic-lift-control) I would think so. I'll check out the specifications and get to you. Thanks.
Chris wrote on October 30, 2015 - 10:12pm Permalink
The Mazda 3 s has 10 more hp and more torque than the Civic. No journalists have been able to comment about the driving characteristics yet because of the embargo, so saying it has the best road handling might be premature. I'm excited about the car, but let's be factual.
Parks McCants wrote on October 31, 2015 - 11:31am Permalink
Welcome Chris. The base Civic LX actually produces 3 horsepower more(158 horsepower)than the Mazda 3 / Touring. The Civic EX-T Turbo produces 174 horsepower. What are you looking at? Thank you.
Chris wrote on October 31, 2015 - 12:24pm Permalink
That is true, but you need to compare apples to apples. The new civic had two power train options just like the Mazda 3. The base engine is indeed 3hp more powerful, but the Mazda3 "s" trim level (both the s Touring or s GT) has 10hp more than the 1.5L turbo engine in the civic as well as more torque.