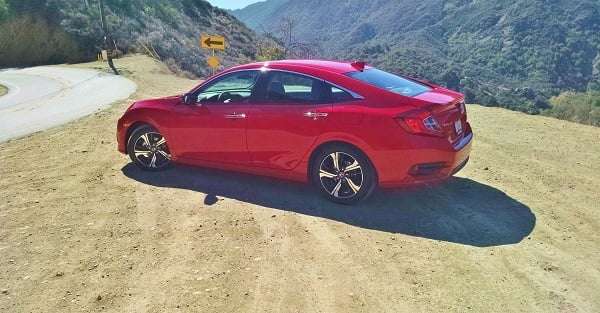 The west end of L.A.’s much storied Mulholland Drive was the backdrop of an event that would forever change our perception of Honda’s bread and butter sedan.
Advertisement

Smiles for miles can have a dizzying effect on one’s judgement. Honda had invited Torque News to journey down to Los Angeles to experience the totally redesigned 2016 Civic Sedan. Frankly, we damn near passed on the invitation.

After all, the subject at hand was Honda Civic, a very capable yet rather vanilla flavored bread and butter car, Honda’s commuter staple if you will. Been there, done that, so we thought. Honda’s 10th gen Civic promised to be a departure from the past, we were listening

Looking to the 2016 Honda Civic Coupe Concept, it became quite evident that what American Honda Motors had titled “The Year of Honda” continued with the advent of the Compact World-Platformed 10th Generation Civic. Honda’s competition was on its knees, wondering what the heck had just hit them.

The 2016 Civic experience goes way beyond the implications of applying Honda’s first manufactured in the U.S. 1.5 Liter turbocharged i-VTEC engine, to a car that had long held the crown of North America’s best selling not-so-entry-level Sedan. This was the 10th Generation Civic, a car that would forever change the compact car segment

Booting the accelerator peddle to the mat, I gazed up to the ‘Game Boy’ like dash cluster and discovered Civic’s red-line. Easing off of the loud pedal just a bit while applying the brakes, 2016 Civic Sedan dropped into a tight 2-lane sweep with the agility and confidence of the best that Audi and BMW had to offer. And that according to Honda engineering had been the inspiration behind Civic’s pavement taming suspension, refined ride and new found interior quiet.

As of now, Civic will give all mainstream Asian and European economy-class-compact challengers a run for the money.

With the beaches of Malibu in our sights, it came to mind that Honda had accomplished something through 2016 Civic that no other automaker participating in the entry-level compact segment had hoped to do; create an affordable, standard feature packed sedan of exceptional fit and finish and notable good looks, while presenting compelling, segment busting, drive and ride characteristics generally reserved for buyers willing to cross over the $30,000 MSRP barrier. While no easy task, 2016 Civic knocks on the virtual door of the midsize segment as to vehicle dimension and creature comforts,(it’s longer, wider and a bit lower than Civic of the past) interior refinement, (forget what you think you know about Civic) interior quiet and ride stability,(engineering tells us Civic is 55% quieter than past generations) and 10 to 15% more powerful than your neighbor’s 2015 Civic Sedan or Coupe.

Bla, bla ,bla, please tell us, how does she drive Parks?

Well this is the crazy thing, really. Stepping out of the near high-performance driving environment that is 2016 Accord Touring Coupe, and dropping into arguably the best constructed and comfortable seat in Civic history was not that great of a departure. Granted, 2016 Civic does not present tear inducing, butt cheek clinching, blistering road performance. But it does surprise a bit.

For 2016, Civic enthusiasts will discover a much refined compact sedan exhibiting measurable performance tendencies. Enabled through what is sure to become Honda’s next 2 legendary power plants, 2016 Civic presents a surprisingly agile sport-like drive capability, greater acceleration, superior braking and a minimal torque steer, packaged in an uptick, dare we say premium compact sedan.

While we did detect just a bit of turbo-lag when aggressively launching Civic off the light, it was minimal, and quickly gave way to an adrenaline rush as the speedometer readily exceeded any resemblance of speed-law-abiding restraint.

Turbocharged Civic Touring reached 55 mph from a launch quicker than I could look up and read the speedometer. And yet when driven with the civility of your grandmother driving her friends to their next Bridge Party, 2016 Civic in any trim variant presents a very refined, quiet and surprisingly civilized drive and ride experience.

Honda has put the early years of high-revving performance back into Civic across all trim variants, while decreasing interior noise levels and improving fuel economy, much to the joy of Civic fans everywhere.

Getting on to the 405 Freeway without apprehension and fear

That not so little nagging morning apprehension as to ingress onto a fast moving highway is gone for the most part, replaced by a new found confidence that is the driving experience discovered behind the wheel of Honda’s next big seller.

And, as with all that is new to Honda, 2016 Civic brings to the buyer the utility and drive features of a multiple personality automotive transformer. We’ll expand on that a bit in a near future article.

Blowing past the “McMansions of Mullholland, we began to notice a neighbor or two walking out to the road for a better look at what was arguably the most exciting car to come out of Honda in a decade or so, a Civic like no other.

As we mentally revisited the Honda “Tuners” of our youth, exuberance had lead to one too many speed passes through the financially rarefied world of Malibu Canyon. What the hell, it was fun and we wouldn't return to the area anytime soon.

With that random eye intently focused on the rear view mirror, we returned to Saddlerock Ranch for a refreshment or two.

You know, that wonderful smell that comes off of a new engine when hot

At this point, my jaw was aching from the excitement induced smile plastered on my mug as we once again discovered Civic’s rev-limiter. As my co driver turned a shade or two of barf bag white, it came to me. 2016 Civic is Honda engineering at its finest, and I can afford it! Remembering the words of Honda's Sage Marie, "After driving 2016 Civic Sedan, I'd consider one for my company daily driver," and that's high praise coming from a guy that races Acura NSX. We salute the 2016 Civic project team and Honda Motors for a job well done, and can’t wait to drive the Civic Si and Type-R.