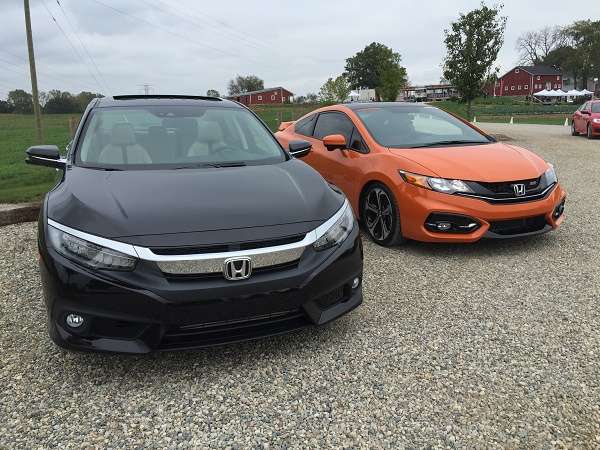 Say what you will about Honda’s next best seller, Civic takes a design cue from the 9th generation Civic Si and supersizes it. While some old-school Honda Civic fans may question Honda’s design directive, we believe that Honda hits the bullseye with 2016 Civic, as to broadening the demographic appeal of Honda’s original compact sedan for North America. looking to the photo above, our friend Jason Richmond of “HondaPro Jason” fame parks his “King Motorsports Unlimited” prepared 2014 Civic Si next to Honda’s next best seller. When comparing 9th to 10th generation Civic design cues, the apple hasn’t fallen too far away from the tree as to 10th Generation Honda Civic body design. The future forward design DNA is unquestionably Honda Civic.

Night or day, there’s no mistaking 2016 Civic Sedan for anything other than a Honda, as this exceptionally well proportioned turbocharged touring sedan displays its Civic Si design DNA.

As is often said: “A picture is worth a thousand words.” Take a look at how Honda has pushed Civic to the top of the compact car segment through punctuated “H” design aspects and a balance of monochrome - bling mixology.

Jason’s 2014 Civic Si i-VTEC engine is pumped up to 300+ horsepower, thanks to the addition of a C.T. Engineering supercharger, IMT intercooler, upgraded performance exhaust, unrestricted intake airflow and performance chip.

Suspension modification to “Project Orange” was executed by the only “Mugen” certified shop in the U.S.. With 25,000 miles showing on the odometer, Jason tells us that the Si, performance modified since break-in, remains mechanically trouble-free.

For the # 1 Honda fan in North America, transitioning out of the seat of “Project Orange” into the upgraded confines of Honda’s 2016 Civic turbocharged sedan was anything but disappointing

Awesome! HondaPro Jason shares with us that on his first drive of 2016 Civic Touring, he was pleasantly surprised by the overall drive performance, interior quiet and comfort found in the slightly longer, wider and lower 10th Generation Civic sedan. Placing a verbal emphasis on a new found quiet, Jason tips his hat to Honda Engineering for a job well done.

In a world according to Jason, Honda has taken the best selling (retail) compact car in North America to the next level in engine performance, driver and passenger comfort and what we like to call “ driveability.” * Thanks Jason for the photo...

PFR wrote on October 14, 2015 - 10:41pm Permalink
I have a question about the upcoming 2016-2017 Honda Civic Si. Has anyone heard anything about whether or not the Civic Si will offer an automatic CVT or manu-matic transmission in addition to the classic 6MT? By my logic, the Si used to be the Honda purists' daily driver. With the release of the Honda Civic Type-R, the Si is no longer the creme de la creme for the enthusiast. That makes the Si a sporty mid-level instead of the performance halo. A relationship similar to what a Camaro is to a Corvette. The enthusiast will shoot for the insane Type R which will definitely be manual only. That gives the Honda purists less reason to complain about offering the Si with the OPTION of more than just a manual. Additionally - let me add that I can drive a 6MT like a champ. My family is originally South American, and everyone drives stick in the lands of our brothers below the equator. And though I love driving stick... I confess I don't love driving it all the time. Bumper to bumper traffic and commuting simply sucks with a stick. I learned that the hard way. An AT is often times so much more convenient. And - the new manu-matic trainees can shift faster than any human being can which means better performance. So - my question: has anyone heard any news about whether the Si might come with an Auto CVT or Manu-matic? Here's to hoping! - Honda Lover
Parks McCants wrote on October 15, 2015 - 12:48am Permalink
Welcome PFR. I like the way you think. Here's what I know from talking to project engineers at the 2016 Civic national press introduction. NADA... As to 2016 Civic Si specifications and date of dealership availability. But, there is a rumor circulating the virtual water cooler that Honda may reveal the 2016 Si at the SEMA Las Vegas Show November 3. Keep in touch, we'll know very soon. I'm with you, and 8 speed DCT with paddle shifting would be nice. Take care.
PFR wrote on October 15, 2015 - 1:04am Permalink
I agree... I think an Si with an 8 or 9 speed auto trannie or a cleverly stepped CVT with narrow gear "spaces" would be awesome when hooked up to paddle shifters and/or a step-tronic shifter gate.
HondaPro Jason wrote on October 16, 2015 - 4:48pm Permalink
I'm have been a big fan of Torque News for a while. I enjoy the way the blogs are written, always with great photography and a bit of humor. I'm really honored that my car is featured in this new 2016 Honda Civic blog. Thank You guys and keep up the great work! #HondaCivic HondaPro Jason
Parks McCants wrote on October 16, 2015 - 11:22pm Permalink
Welcome HondaPro Jason. Back at you my friend. Your readership and heartfelt compliment is much appreciated. Very nice Si by the way! Hope to catch a ride in it sooner than later. Wishing you continued success in all of your endeavors. Parks.
Brianvegas wrote on October 18, 2015 - 1:18pm Permalink
Looking forward to comparisons of the 2015 Civic Si with the new 2016 Civic Si. What are the major differences and/or improvements? In general, are the advances a major change? What do you see coming in the next two years?
joj wrote on May 19, 2016 - 7:30am Permalink
a big bird from thesky