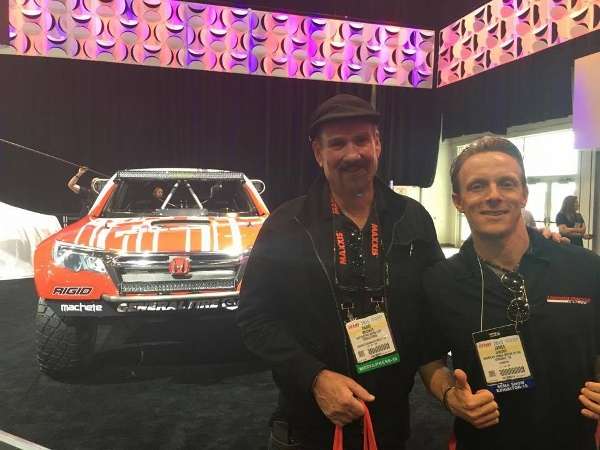 Well sort of. We look to the Baja 1000 Ridgeline desert race truck for a clue or two.
Advertisement

Attending 2015 SEMA Show Las Vegas was an eye opener for this journalist and the estimated 60,000 automotive industry insiders in attendance. The Ridgeline reveal, not so much so.

SEMA is the largest automotive aftermarket, specialty tool, off road racing, speed performance and accessory show and the planet. To say the least, walking the Las Vegas Convention Center show piece can be overwhelming, the spectacle, astounding! It took a bit of effort to get there, but was well worth it.

Oh yeah, Honda and Acura were there as well, although albeit a bit understated by SEMA standards. This year the subject of Honda’s SEMA announcement is H.P.D.s (Honda Performance Development) return to S.C.O.R.E. sanctioned desert racing. And, in true Honda fashion, they’re doing it big with the unveiling of the Ridgeline based Baja 1000 race truck.

This is where it gets just a little bit fuzzy for Ridgeline fans looking for a timely confirmation from AHM (American Honda Motors)as to what the next generation Ridgeline will look like, when it comes to market hopefully in early spring 2016

As H.P.D’s president Art St Cyr unveiled the Ridgeline desert race truck there was no applause in the crowd coming from those journalist anticipating a true look at the next production Ridgeline.

As with Acura’s TLX G.T., the only things Honda’s exceptional desert racer has in common with the next generation Ridgeline is a basic body shape, cartoon like decal headlights, mach-grill, and a V6 engine block. The balance of the truck is full blown 500 horsepower, multiple shock tower, high speed desert racer.

So much for speculation

O.K. Honda, we get it! 2016 or is it 2017? Ridgeline will sport a more conventional looking crew cab body, box shaped truck bed, 2016 Honda Pilot looking front end and grill treatment. Now, here’s a bit of speculation on my behalf. I believe that the new Ridgeline is based on the same production platform as the 2016 Honda Pilot Elite, may have greater towing capacity and ground clearance, maybe!

So, our headline photo does paint a relatively true picture of Ridgelines profile and headshot on steroids. It’s blown up a bit to facilitate a much wider and higher off road racing platform, is constructed of molded plastic or fiberglass, and quite magnificent in a race fabrication sort of way.

But truly, we know little more now about Ridgeline design than we did prior to attending 2015 SEMA. No worries, according to Mr. James Jenkins, project manager for the all new Ridgeline, it’s tough, powerful and works very well on all road surfaces under all weather conditions.

Is more powerful, comfortable, safer and tech rich than the outgoing generation. Honda fans will love it! I further predict that the all new Ridgeline will convert a few “Big 3” truck fans as well.