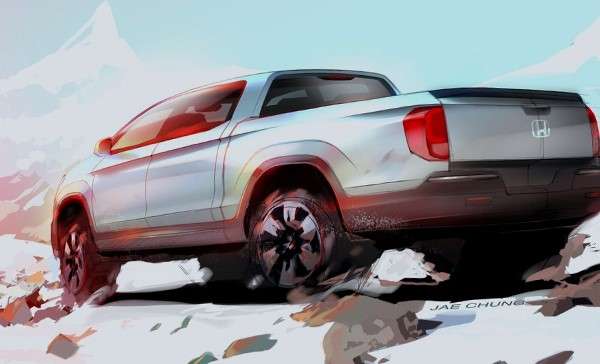 If you’re anything like most Honda truck fans, you already love Honda Ridgeline. The first week in October found a few rumors surfacing as to a Ridgeline with 2016 Pilot design tendency and fuel efficiency.
Advertisement

As predicted right here at Torque News late in 2014, the soon to be released Honda Ridgeline pickup truck will be super fuel efficient, and follow the redesign lead of the 2016 Honda Pilot, while retaining the truck toughness and utility of the historic Ridgeline.

The first week of October finds a clue or two as to 2016-2017 Ridgeline’s engine and exterior body design. Actually the body styling is not much of a mystery. Honda has an artist's rendering of the unitbody, ‘H’ ladder framed multi-gate mono-truck posted on its Future Ridgeline information updates page.

We’ve experienced the much improved 2016 Honda Pilot, and when looking to the many Ridgeline spy-photos populating the web, easily catch the design cue similarity between the two offerings, including the 3 bar grill common to the Pilot. Monday found a mystery reader claiming to have just sat in the 2016 Honda Ridgeline, could be!

We put in a call to Honda truck engineering and asked if this was possible, they’re not denying it

We further predict that 2016 - 2017 Ridgeline will come to market with a slightly larger interior, improved seats, a very aerodynamic cab, greater towing capacity and an optional Elite upgrade package. As to off-road toughness, we believe that Honda will look to the next generation “smart” all-wheel-drive platform for Ridgeline, featuring manual locking differentials and dial-terrain mode for added traction.