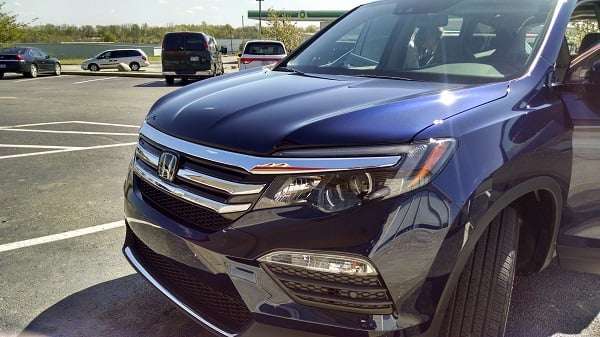 We meet 2016 Pilot SUV in Cincinnati

When pulling out onto Kentucky Speedway, home to NASCAR’S Quaker State 400, I didn’t quite know what to expect from Honda on the reveal day of the totally redesigned 2016 Pilot. None the less, the drive out to the track from Cincinnati, Ohio in Honda’s 3rd generation Pilot SUV was a pleasant one.

I’ll be the first to admit that prior to experiencing Pilot first hand, I held more than a fist full of mental reservations as to flying across the U.S. to review yet another light truck based SUV.

After all, a midsize SUV is an SUV, and, unless one has a weekly pressing engagement with a junior soccer league, your kids, kid’s friends and a dog or two to move across town, you most likely have little to no need for an 8 passenger SUV in you life. Right? So I thought. Driving up to the hospitality staging area at Kentucky Speedway, automotive journalist were greeted by Honda Pilot’s competition. There, lined up before us, sat Chevrolet, Ford, Nissan and Toyota, all mid size, all premium, and all approaching $50,000.

Honda takes a bold move in the "show me" direction

Honda had taken the same strategy in Huntington Beach, California for the roll out of 2015 CR-V, handily winning that competition. By the end of the afternoon, Pilot would speak for itself in this shootout, and come out squarely on top of the competition in many categories. Offering greater standard features, superior passive and active safety technology, improved fuel economy and class leading aerodynamic body styling, Honda Pilot now takes the lead in a very competitive segment.

But for me, that was truly just the beginning of the story, and perhaps not the greatest surprise on a day that would forever change this reviewer’s perception as to what a midsize SUV can and should be.

Quiet and comfortable, yet as tough as nails Now, while that aforementioned wish list is not an easy task to accomplish, for 2016, Honda presents a new and improved Pilot of refined, well balanced interior proportions and refinement, while retaining the historically correct “Truckness” of the original Pilot concept.

Driving 2016 Pilot over the back roads of Ohio into the hill country of Kentucky, my co driver and I were collectively taken by the interior quiet and refined ride of Pilot. Was this truly Honda’s mid-level “mainline” SUV, and how could premium Pilot by marketed at an MSRP that would not impact Acura MDX sales?

Sporting an impressive short turning radius,(we missed a couple of directional signs) responsive acceleration, braking and transitional road surface handling, Pilot presents a very light, yet controlled steering feel; nothing mushy about the suspension tuning. Yet, the stiff truck-like suspension of Honda Pilots of the past is gone, thanks to a totally redesigned construction(cage) platform, suspension and running gear.

Honda Pilot is now my logical choice for extended highway travel. pilot is the Ford LTD Wagon of the new millennium with a tech-uptick or two

You may add to the list of upgrades, a Pilot that is constructed on the most advanced sub frame assembly in the industry; offering greater rigidity, superior passenger cage impact deflection, and a curb weight reduction, -300 lbs less than the previous generation. Note: I experienced no driver fatigue while pushing (hard) 2016 Honda Pilot down the 2 lane country twisties. Torque News-Honda can’t say enough as to Pilot’s exceptionally constructed driver and passenger seating. You may wish to experience it for yourself. Words don’t begin to capture how memory-foam like supportive they are. Our 2016 Pilot was equipped with power adjustable, premium perforated leather, heated captains chairs. Yes, for 2016, you can also get that option for row 2.

How’s the entertainment and personal connectivity

Not to take anything away from Chevy, Ford, Nissan and Toyota, but you boys have been “One upped” by Honda Pilot; it’s that good.

I further discovered that 2016 Honda Pilot is more off-road and foul weather worthy than past generations; presenting a new and improved (next generation) 4WD variable-torque-distribution all wheel drive system that kicks-in when the system senses loss of traction.

Further noted is a manual locking rear differential for mud-bogging or heavy towing pull-out. Pilot is the real deal! Hill Assist ™ and Grade Logic ™ also come along for the ride; making Honda Pilot a true-truck-based contender in a world of urbanized SUVs.

Engine and transmission upgrades for 2016

It’s a tough balancing act that Honda excels in For 2016 Honda has integrated a center console mounted ITM button. What this does is give the driver the option of choosing 4 drive modes; Normal, Snow, Mud and Sand. Of course, driving out on a paved NASCAR race track, participants weren't afforded the opportunity to experience the functionality of the drive-mode button.

None the less, I'm confident that it does work as described: In short, for different traction and towing load conditions, the driver can opt for drive modes that can vary transitional torque to rear-differential when called for, select a higher gear(2nd) take-off point, thus allow transitional slippage when required for moving out of deep mud or sand. good stuff!

Combined with Honda’s limited slip FWD or 4WD technology and *(new for 2016) 6 or 9 speed automatic transmissions and (new to Honda) 1-VTM4 transfer case, Honda Pilot leads the segment in out of the box performance while recording the highest EPA MPG rating in the segment.

On a personal note: I found Pilot’s transitional drive systems to be seamless, and noted minor to no difference in dry pavement performance between variants. Both 6 and 9 speed transmissions performed flawlessly, torque transfer to the road was slip-free and tractable in all drive modes.

We found the “Drive by wire” throttle to be instantaneous, and although not what I would consider to be a high power output engine from a racer’s point of view, Pilot never left us wanting for more when it came to acceleration, drive ability and road handling. In fact, Pilot borders on fun to drive!

2016 Honda brings a much improved, V6 engine, 6-speed automatic aerodynamic and fuel efficient base model Pilot 2WD LX to market for MSRP $29,995. This is Honda’s answer to the (near) full size family station wagon of the new millennium. Featuring a standard backup camera with directional lines, front and rear cabin climate control, power windows, seats and one-touch 3rd row seat access, I find the base model Pilot to be an exceptional 8 passenger SUV purchase value.

From there... the sky’s the limit, literally

“Family Function, Premium appeal,” is the buzz phrase that Honda uses to describe the essence that is 2016 Pilot. Honda takes it a step further by labeling Pilot “A class above, offering stylish design and comfort.” I couldn't agree more.

Can’t capture Pilot’s astounding uptick in one article, or at least I can’t! So here’s the short list During my drive experience event at the Kentucky Speedway, I experienced the wonders of “Honda SENSING ™ .” Admittedly, being “Old School,” in the past we reached for the off button when it came to the vehicle taking over our driving duties.

Experiencing a 2.5 Ton SUV self braking and coming to a complete stop from 20 mpg ( just short of hitting the car dummy parked in front of us) is exhilarating and more than just a bit eye opening.

The implications as to near future accident avoidance presented through 2016 Pilot is impressive. I haven’t identified a safer 8 passenger SUV on the road today. Pilot is a great value by any measure. As to the “Bottom line?” Honda Pilot just reinvented the mainstream 8 passenger SUV.