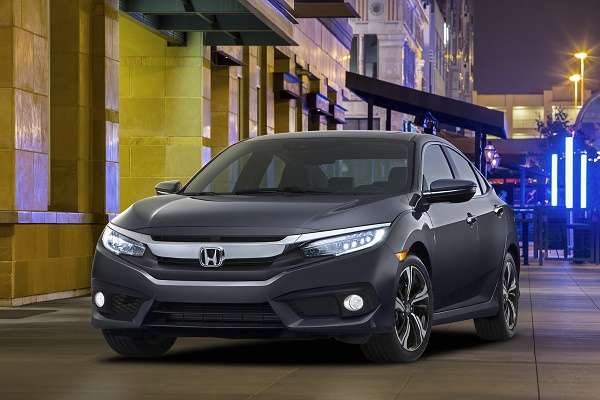 While Sage Marie and Honda engineering did a commendable stage presentation of Honda’s next best seller, from an auto journalist point of view, 2016 Honda Civic took a back seat to Boy Band Night Riots. Frankly, that’s not what most Honda fans anticipated
Advertisement

O.K., we’re all about the show business side of the car world. Without it I’d most likely be out of a job, my YouTube channel, non existent, Los Angeles Car Show, just another show and shine. So let’s take a look at Honda’s second YouTube reveal from a technical viewpoint; one of high definition, well rehearsed stage presence.

Unfortunately, 2016 Honda Civic is perhaps the most studied and subsequently exposed new car roll out in Honda history. The only other vehicle in the house of Honda that comes anywhere near the number of so-called spy-shots leaked to the internet is the 2016, or is it the 2017 Acura NSX?

I‘ll hand it to Honda: Tonight we were granted a 4 sided visual of the car that I believe will redefine the compact sedan segment. And, if in fact a 5 door hatchback comes to fruition, broaden the appeal of the Civic lineup.

2016 Honda Civic Sedan is by any measure an artfully designed car that pushes the segment as to entry-level design, stellar head and tail lighting, and according to Honda, the best personal connectivity and active safety in the compact segment.

Sure. “Night Riots” is cool, but how about a bit more 2016 Civic visual. Truthfully, we didn’t expect to learn much as to 2016 Honda Civic specifications this evening. None the less, the powers to be at Honda did share tid bit here and there. Here’s what we learned.

As to engine specifications it is confirmed that 2 EarthDream ™ engine options will provide greater horsepower across the lineup( 2 liter normally aspirated 4 cylinder+15, 1.5 liter turbocharged 4 cylinder gasoline+30 respectively) while attaining a 40 mpg + rating on the highway.

Honda management has confirmed once again that a Civic Type-R for North America is in the works. It’s time of arrival? Anyone’s guess

2016 Honda Civic’s roof line is one inches lower than the 9th gen Civic, it’s 2 inches longer; most if not all of that dedicated to greater passenger legroom. And, although the roof line is lower, Civic’s lead designer Jared Hall claims that Civic’s interior is roomier, more refined, quieter, and highly connectable as to Android and “Apple Carplay” compatible smartphones and devices; certainly!

As I logged off of Honda’s YouTube reveal it occurred to me that you just can’t please everyone. It was a great 30 minute show with a resolution problem or two. lighting was good, sound quality was good, Hostess Liz Hernandez was cute, and Honda’s National P.R. Director Sage Marie’s hair was perfect; one couldn’t have asked for more.

As for me, I look forward to driving 2016 Civic sedan late in September, and will share with you my take on Honda’s next big success story in “2015 The Year of Honda.” When “Honda, The Power of Dreams,” takes the world-compact-platform 2016 Civic to market.

danwat1234 wrote on September 16, 2015 - 11:51pm Permalink
Autoguide has some decent pics including 1 of the inside of the trunk. Nobody dared to open the hood I'd guess. With both the 2016 Civic and Prius (whose reveal was in some ways better than the Civic reveal), they both are supposed to be lower to the ground... speed bumps and going up/down curbs and steep driveways may be difficult to do. But with my old '99 Civic, I have decent ground clearance.
Parks McCants wrote on September 17, 2015 - 12:11pm Permalink
Welcome danwat1234 True enough. There is a disadvantage to a car that sits low to the road, but I'm not sure that's the case here. The roof-line is 1 inch lower. I'll capture a chassis photo or two at the end of September. How many miles driven are showing on your 99'? looking to the Auto Guide spy shots, I do believe that the nose air dam may be problematic at driveways, speed bumps, etc. I'll let you know in 2 weeks when I do drive 2016 Civic for the first time.
Daniel Watkins wrote on September 17, 2015 - 6:50pm Permalink
Your sure it isn't the case here that it's a disadvantage that it sits low?. It's possible the 2016 Civic also has a nose air dam, something below the bumper like on a Chevy Volt for aerodynamics. With that it is very flexible so doesn't usually break. The supposed 174HP of the 1.5L turbo is less than the 1.5L Ford Ecoboost of 181HP but not bad. Not surprised if it gets better MPG than the 2L NA engine and almost as quick as the last gen Si because of low end power from the turbo if they designed it well. But I'm all about hybrids, electric power but they discontinued the hybrid, though it didn't compete with the Prius well anyway and the 2016 Prius may be faster, better handling and way more MPG than the stupid Honda CRZ, so.. My 1999 Civic DX Coupe automatic has 244K on it and with no signs of wearing out of the drivetrain. Rear Trailing ARM (RTA) bushings on the suspension are worn out (common issue) but doesn't affect handling that I can tell. HID headlights and bright LED brake lights, interior.
Parks McCants wrote on September 18, 2015 - 12:23pm Permalink
Good morning Daniel. I believe you catch my drift here, despite my comment that was written on the fly. Take care, we'll keep you posted. If in fact you're interested in editing here at Honda-Torque News. email me. Best wishes.