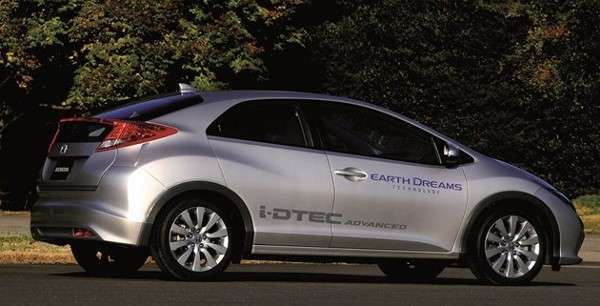 2016 Civic Euro-Hatch for U.S. could be Turbo Diesel

looking to specifications and consumer demand for a fuel efficient, direct injected turbo diesel, Honda holds in its arsenal arguably the lightest and cleanest burning diesel lineup in Europe and Japan.

Sitting front and center in a European automotive market comprised 55% of diesel fueled cars and light trucks sits Honda’s Accord, Civic and CR-V Turbo diesel; all affordable to operate, maintain and fun to drive, as well as tax-credit compliant.

Consumers report Honda EarthDreams ™ diesel engine MPG approaching 60+ per U.S. gallon. In crunching the numbers,Torque News reported on CR-V diesel fuel economy surpassing those numbers with 0 to 60 MPH performance approaching,(not meeting) that of a similar normally aspirated gasoline engine. For the purchase price of a well used Civic Si, one could put an appreciable dent in the purchase or lease cost of a 5 door performance turbo diesel hatchback.

Consumers ask: So why not in the U.S. and Canada? With Audi and Volkswagen TDI making sales strides in North American markets, and retail diesel fuel pricing falling at the pumps, why hasn’t Honda offered a diesel turbo option?

In checking our historic backlog, we find an article penned by Barry Winfield of Car&Driver.Com way back in 2006. At that time American Honda Motors had hinted at the arrival of a turbo diesel option for North American compliant cars “Within the next 3 years.” With reported greater fuel efficiency than a Honda Accord hybrid, America is still waiting.

With the growing popularity and bulletproof mechanical attributes of this SUV and others like it, Honda fans and current owners are looking for a turbodiesel power option in the companies light truck lineup; 2016 Honda Ridgeline; 2016 Honda Pilot and a possible totally redesigned Honda CR-V EarthDreams ™ turbodiesel.

Our friends at American Honda Motors are tight lipped as to any future turbodiesel developments. However, don’t discount the possibility as Honda looks to fuel efficient and torque producing alternative engines for near-future model releases. We’ll leave it at that.

Larry wrote on May 6, 2015 - 8:06pm Permalink
In reading this article it wasn't very clear to me as to a specific basis for the claim that Honda will launch a Civic Euro-Hatch to North America for the 2016 model year (or in 2016). I think the Barry Winfield article to which you alluded was actually from 2006 (not 2016). Thanks
Parks McCants wrote on May 6, 2015 - 11:29pm Permalink
Welcome Larry. We have confirmation from American Honda Motors that an English manufactured 5 door hatchback based on the 2016 Civic World Car platform is scheduled for import to the U.S.. Yes, you're correct. The Winfield article was penned back in 2006, please excuse the typo. The spaculation as to an available Diesel iteration is just that, speculation, and has been voiced by many Torque News readers. Cheers. We'll keep you posted as new developements unfold. Note: The retail Unleaded Gasoline price has increased no less than 20% in the past 2 weeks on the West Coast of North America. A return to $4.00+ gasoline will further entice Honda to release an Earth Dreams dirrect injected diesel engine in the U.S.. Our Honda contacts suport the posibility. Wishing you safe and trouble free driving.
Larry wrote on May 6, 2015 - 11:41pm Permalink
Thanks. I anticipate finally buying a new vehicle (to replace my 2002 VW TDI) and as a potential alternative to VW (whose 2016 AWD Golf Sportwagen TDI still is unconfirmed), was looking for Ford, Mazda, or Honda to offer a 2016 diesel 5-door with manual gearbox. The Honda design sounds very interesting. Cruze diesel had some quality issues, but they have a redesign coming (5-door? dunno), and I am trying to look beyond BMW, MB, Audi, Jeep, Toyota, etc. (VW will be my fallback option.)
Parks McCants wrote on May 7, 2015 - 12:17pm Permalink
Best of luck in your search Larry. We'll keep you posted with new developments.
Robert wrote on August 17, 2016 - 11:13am Permalink
Looking for auto with diesel engine.
Dar wrote on June 4, 2017 - 5:45pm Permalink
Rumor has is the American Honda will release a 2017 Honda Civic Diesel before the end of the 2017 year. We are going to purchase one along with a Type R also.