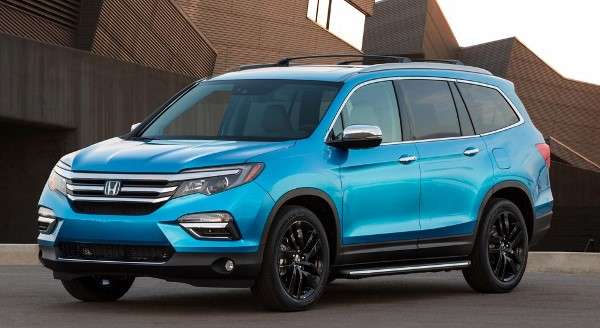 Is Honda’s “Triple-threat” to the SUV market also a detractor from Acura MDX sales? We look to Honda Pilot Elite for an answer or two.
Advertisement

The 2016 Honda Pilot Elite could be a bit of a marketing problem for American Honda Motors, specifically the Acura Division. A company that is often criticized for a lack of measurable difference between it’s premium lineup and down-line offerings, just dropped a bombshell.

For 2016, Honda will introduce to market arguably the most advanced Pilot manufactured to date. Featuring several Acura MDX-like design cues, a very similar interior layout to MDX as well as power and torque approaching but not quite meeting MDX specifications, the light truck based Pilot will give Acura MDX a run for the $, while giving those would-be Acura buyers the opportunity to consider the less expensive, yet comparably equipped Honda Pilot.

Granted, we haven't test driven 2016 Pilot, that will happen later this month in Ohio. So, we’re unable to comment on the interior quiet and road manners of Pilot, an SUV that we recently assessed as being “truck-like” in utility, off-road-capability and interior noise level. We’re assuming that Honda has taken Pilot’s ride experience to the next level. In past reviews we found Honda Pilot to be a greater purchase value than Chevy Tahoe.

For 2016 Pilot comes to us with greater horsepower, torque,( 280 horsepower/262 ft-lb torque) and greater fuel economy afforded through direct injected V6 1-VTEC technology. While the base model will feature a 6 speed automatic transmission and Honda’s i-VTM4 all-wheel-drive option, a 9 speed transmission as found in Acura MDX will be available in the Elite trim variant.

looking through the specifications list, we find many features and options generally reserved for a premium SUV . Active noise cancellation, multiple view rear, back-up camera, twin-screen dash with touch and voice activated command integration, pull down rear passenger entertainment center and more. You may take a look at the complete list of published features here.

With 2015 Honda Pilot Touring presently priced at MSRP $41620+, there’s only $3,000 separating this show-boat Honda SUV from Acura Division's bare-bones, yet well equipped 2016 MDX SH-AWD. Yes, you can spend $57,000+ on a fully loaded MDX, but you need not, to experience MDX quiet and superior engineering traits.

Assuming that Honda holds the price on this model year change as recently demonstrated in 2015 CR-V, the all new Honda Pilot Elite will be an SUV purchase bargain by any measure. Honda Pilot is sure to give Acura MDX a run for the money, especially in a true-off-road driving environment.

Keith McMillan wrote on February 9, 2016 - 7:43pm Permalink
In December 2014 I bought a new 2015 Acura MDX 3.5L Technology Package AWD with a sticker just shy of $50k. Six months later Honda came out with the new Pilot. As your article describes, the fully loaded Pilot has more features by a mile than my 2015 MDX at a sticker price of $4 to $5k less. As a very loyal multiple Acura/Honda owner and recommender I feel absolutely taken. Acura is not a premium brand and Honda should refund MDX owners $5k for the rip off.
Parks McCants wrote on February 10, 2016 - 12:30pm Permalink
Welcome Kieth. Spend a minute behind the wheel of Pilot, and walk away with a greater appreciation of MDX. "Nuance" There is a difference.