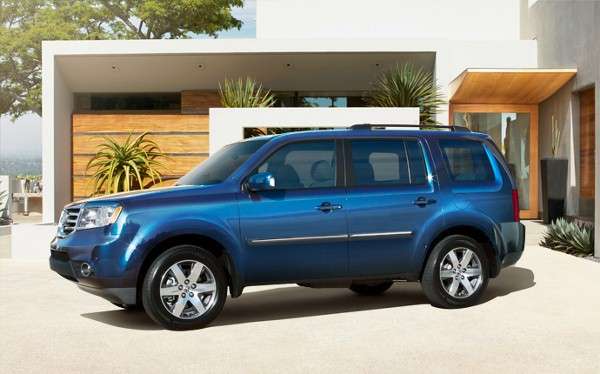 For 2015 the 8 passenger Pilot SUV is the only true light truck chassis you will find in Honda’s lineup. We like the Pilot for bullet-proof reliability, decent off-road manners and economical truck-tough refinement.
Advertisement

Driving around Eugene, Oregon you won’t see too many Honda Pilots on the road. Pilot by Honda measurement is full-size and fuel thirsty. Gone is the Honda Ridgeline for a year or two and Honda is pushing the low sales volume Pilot with added value trim packaging.

With a combined driving EPA mpg of 21 in front wheel drive configuration, the Pilot is Honda’s least fuel efficient entry, and yet Pilot leads the light truck segment in fuel economy.

When comparing the American built Pilot to the Chevrolet Tahoe and others, the 2015 Honda Pilot is a relative bargain.

Chevy can’t touch this. With a base msrp of $29,870, Honda smokes Chevrolet with a nicely equipped standard features package superior to that of the Tahoe. I’ll tip my hat to the Chevy diehards that will gleefully inform me that the Ridgeline based Pilot does not offer a V8 nor meet or exceed the towing capacity of the Tahoe.

True enough, but the Pilot beats the Tahoe by $10,000+ on the showroom floor while retaining a higher long-term resale residual value, will seat 8 in relative comfort while towing 4500 lbs.

2015 Honda Pilot owners will witness 24 mpg while driving down the Freeway with the airconditioning and Sirius XM satellite radio blasting. Tahoe? Not…

As shared with our readers in past review, we like Honda’s 3.5 liter i-VTEC V6 and VTM 4 wheel drive system. The 5 speed automatic transfers 250 hp to a front wheel or 4 wheel drive train with fluid ease. Honda achieves the highest fuel efficiency in this segment via drive-by-wire activated fuel injection, timing and cylinder management. You won’t miss Chevy V8 while driving the 2015 Honda Pilot.

We reported the attributes of the smart 4 wheel drive system as experienced in the winter of 2013. It works well under all road and weather conditions and is available as an affordable option on the 2015 Pilot.

You can spend a moment with the specifications and standard features sheet here. looking under the largest vehicle in the American Honda Motors line up, we find the frame rail, chassis and running gear to be truck tough. This thing is big by Honda standards, leading us to ponder the dimension of the much awaited 2016 Honda Ridgeline.

Where Honda truly shines is off of the road. With locking differential, 4 wheel independent suspension and rear trailing arms. McPherson struts up front, grade control and superior sound isolation, the 2015 Honda Pilot is a pleasure to drive on or off of the pavement.

Best fully equipped msrp in North America. For your dollar spent, the fully optioned Pilot Touring 4WD with RES and Navigation offers the best value in its segment. With a msrp of $41,620, Chevy can’t touch this, nor can any other manufacturer in North America.

ss wrote on June 11, 2014 - 2:40pm Permalink
"Honda achieves the highest fuel efficiency in this segment via direct fuel injection, timing and cylinder management." Hey dude, 2015 Pilot does not have direct injected Engine.. It's the same engine.. Do the freakin research.
Parks McCants wrote on June 11, 2014 - 4:57pm Permalink
Thanks for that ss. I'll get right back to you with a specification or two.
Parks McCants wrote on June 11, 2014 - 5:06pm Permalink
i-VTEC with Variable Cylinder Management (VCM)[edit] In 2003, Honda introduced an i-VTEC V6 (an update of the J-series) that includes Honda's cylinder deactivation technology which closes the valves on one bank of (3) cylinders during light load and low speed (below 80 km/h (50 mph)) operation. According to Honda, "VCM technology works on the principle that a vehicle only requires a fraction of its power output at cruising speeds. The system electronically deactivates cylinders to reduce fuel consumption. The engine is able to run on 3, 4, or all 6 cylinders based on the power requirement, essentially getting the best of both worlds. V6 power when accelerating or climbing, as well as the efficiency of a smaller engine when cruising." The technology was originally introduced to the US on the 2005 Honda Odyssey minivan, and can now be found on the Honda Accord Hybrid, the 2006 Honda Pilot, and the 2008 Honda Accord. Example: EPA estimates for the 2011 (271 hp SOHC 3.5L) V6 Accord are 24 mpg combined vs. 27 in the two 4-cylinder-equipped models. i-VTEC VCM was also used in 1.3L 4-cylinder engines used in Honda Civic Hybrid.[4]
Parks McCants wrote on June 11, 2014 - 5:08pm Permalink
still looking for that injection specification (puttttts) get right back to ya...