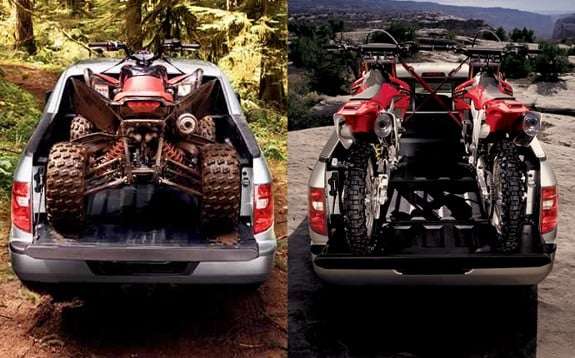 With the 2014 Ridgeline fuel economy and load capacity taking 3rd position to Chevrolet and Ford, Honda will pull Ridgeline off the market for a year or two. We believe the 2016 Ridgeline will return as the #1 Hybrid pickup truck in North America.
Advertisement

Chevrolet tried it with the 1500 Silverado Hybrid. Owners of the truck either loved it or hated it. All found the transition between gas and electric to be a bit jerky. In 2014 Chevrolet dropped the Hybrid and opted for the EcoTec 3 V8. A gasoline fired motor that produces greater mpg efficiency than the Hybrid truck; through variable timing; high compression and cylinder management.

Nonetheless, Chevrolet’s 10 year run proved the market limitations as well as the viability of a ½ ton Club or Crew-Cab Hybrid pickup truck.

Granted, the Ridgeline is not the size of a Chevy Silverado pickup nor does it offer the same interior cab space, payload or tow capacity. But what it does offer is superior off-road ride, car-like ergonomics and handling characteristics. In short, the Ridgeline is the perfect car-truck.

We believe that this is what Honda intended it to be . So, why is Honda pulling the Ridgeline off the market?

Late in 2013, American Honda Motor Co. leaked a shadow drawing implying a body redesign for the Ridgeline. The drawing hints at greater aerodynamic coefficient, but that’s about it. in short, the Ridgeline’s combined mpg rating of 17 is no longer competitive; as Chevrolet and Ford raises the bar of light truck fuel efficiency and power to weight ratios.

The 2014 Ford F150 claims an un heard of 25 mpg Highway in a full size pickup. The 2014 Chevy Silverado 1500 claims 23 mpg. These fuel ratings and subsequent power to weight ratios, superior load and tow ratings, render the niche market Ridgeline obsolete in one on one truck comparison albeit one category; price and standard features.

Where the Ridgeline remains a relative light truck bargain is at the “ bottom line.” With a suggested “beginning price” msrp of $29,575, a nicely equipped Ridgeline is priced $5,000 below a 2wd Silverado. Honda effectively includes the best 4 wheel drive system(VTM-4) in the business standard across the line. You can’t buy a 2 wheel drive Ridgeline. Locking Rear Differential, independent front and rear suspension, Drive by Wire and 5 speed automatic transmission; all standard.

When we compare the weight to power ratio of the Ridgeline to the Chevy and Ford, we find them to be comparable at the lower end of the available engine spectrum. Honda utilizes the Aluminum block 3.5 liter 24 valve sohc V6 to power the Ridgeline. In its stock form, the motor produces 250 hp and 245 ft-lb torque. Plenty of juice for a truck platform weighing in at under 4575 lbs; 2,000lb less than the Chevy Silverado.

Logic dictates that Honda R&D is exploring the integration of iMMD Hybrid technology into the Ridgeline platform. With Ridgeline sales increasing by 29% in 2013, the public has spoken;they like the size,style and utility of the Ridgeline.

Prediction: Viability of a 30+ mpg pickup lies in Honda’s court and will most likely metamorphise in the form of the 2016 Ridgeline Hybrid Pickup. We expect a new and improved Ridgeline to provide greater interior space, a slightly greater payload and tow rating while providing great mileage and utility. Don’t be surprised if your 2016 Ridgeline comes with regenerative braking and E-CVT.