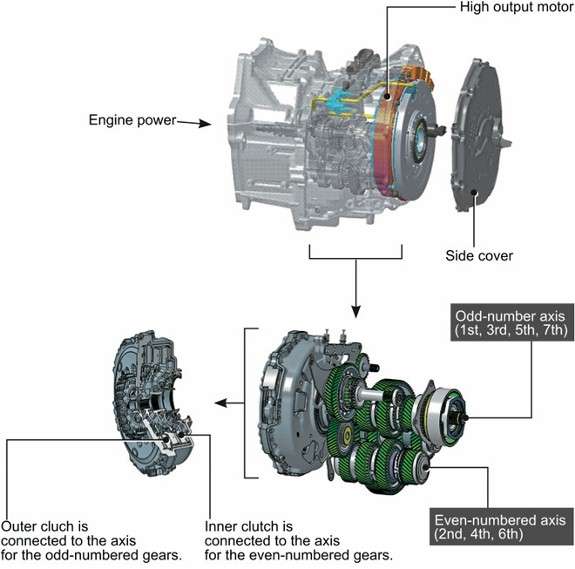 Despite holding some of the highest quality manufacturing standards on the planet, Honda Motor Co., ltd. has called for a voluntary recall of all Fit Hybrid and Vezel Hybrid vehicles manufactured in Japan between Jan. 2014 and Feb. 2014.
Advertisement

This will mark the 3rd voluntary recall initiated by Honda in as many months. All 3 recalls are centered around the Hybrid's DCT, 7 speed, dual clutch transmission. Actually, according to Honda, the software program that controls the engagement and shifting pattern of the DCT is defective. You may read the announcement here.

Honda will temporarily suspend production of the Japan Fit Hybrid and Vezel Hybrid.

Take a look at the photograph at the top of this article. There is nothing simple about the mechanism. While the DCT design originated prior to the second world war, a working model didn't make it into production prior to 1980. Honda incorporates a powerful “ internal” electric motor in the Fit and Vezel Hybrid. We believe you will find Honda moving away from this design with a smaller CVT unit as presently employed in the 2014 Accord Hybrid.

As reported by Torque News, Honda has had its share of recalls in the last few months. When looking to the numbers we find that no fewer than 800,000 Honda owners may by embroiled in a sometimes reluctant consumer to dealership-interface.

While Honda puts the finishing touches on the newest transmission, automotive manufacturing facility in North America, we wonder if the company may be practicing just a bit of “road” bench testing.

We've seen this ‘gray area’ practiced in the past by Domestic and European makes and ponder the implications of Honda following suite.

Out of all fairness to our favorite automotive brand, The November Odyssey minivan recall was for a braking malfunction, followed by a faulty airbag control board; Model years 2007 and 2009.

The numbers are big (700,000,) but very few consumers had actually experienced early airbag deployment in the Odyssey. But then again, once is too often.

For a company that has manufactured and sold millions of cars and light SUVs in North America, Honda proudly points to a relatively small incidence of recall; a stellar safety and quality record.
As to the Fit and Vezel recall, Honda management humbly forwards the following apology.

“Honda sincerely regrets causing this considerable inconvenience to its customers due to the fact that the defect was not discovered during the development and product quality verification processes prior to the introduction of a new technology to the market and the defective product quickly came to market. Moreover, despite the fact that all relevant divisions at Honda worked together earnestly to solve this market quality defect, Honda deeply regrets that the effectiveness of the countermeasures was not adequately verified.”