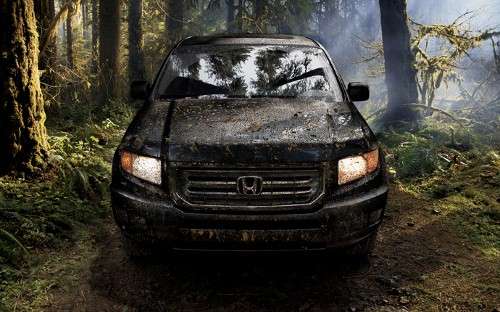 Simply put, Honda has engineered the 2014 Ridgeline to outperform Chevrolet, Dodge, Toyota and others in the ½ ton 4x4 pickup classification, with traction second to none. How did they do it? Look to Honda’s VTM 4-Lock drivetrain engineering for the answer.
Advertisement

Spending the past four days living under record early winter weather conditions, this reporter found himself challenging sub freezing, ice road conditions in a last century Volvo 80 S. The Scandinavian sled performed better than expected due to a road condition limited slip differential activated by the push of a button. Good stuff.

Flying around town in the frozen white stuff, gave me much time to study the winter driving skills of my neighbors, many of them challenged by vehicles that were not equipped to combat the ice and snow. More than one 4x4 slipped through a red light or two with the binders fully engaged.

With one exception, the Honda Ridgeline. I followed one for a few miles on Monday and was amazed by its obvious exceptional handling as well as skid and slip-free starting and stopping. Both, without the benefit of snow cables or chains. So, I decided to study Ridgeline specifications for clues as to why this small car-truck could move over icy roads with great control and ease.

What I discovered is that the company that produces the best selling sedan and small car in North America as well as the most powerful production Hybrid, also produces a superior 4x4.

Honda’s success in superior off-road, snow and muddy condition ride and handling comes via the Ridgeline’s exclusive (VTM-4) Variable Torque Management 4 wheel drive system and lock control. No one else in the industry has it.

The aforementioned allows the driver by the push of a button to lock the rear differential for up to 18 mph in forward or reverse. No one else in the industry offers this system as a standard feature on a light truck. Stuck in the snow, bogged in the mud, Ridgeline will work its way out of the hole.

It also offers a superior weight to power ratio via a high torque V6. Standard on all trim packages is the 250 hp. 3.5 liter, 24 valve SOHC V.6 delivering 270 ft.lb torque at a very usable 4300 rpm.
Weighing in at 4513 Lbs, the Ridgeline out powers the Chevy and Dodge’s V6 and encroaches on V8 territory.

A programmed optimum shift point 5 speed automatic completes the package resulting in a “ light” ½ ton package that is hard to beat in inclimate weather conditions.

Although Ridgeline is a small truck and doesn't deliver the anticipated economy of the Honda Accord or Civic, it will easily carry 1000 lb while towing a 1500 lb trailer; try that with your Civic. None the less, the Honda Ridgeline does deliver an estimated average mpg 15/21 while performing the duties of a superior urban transformer.

With a “ suggested start price” of $29,575.00, the Ridgeline may be a stylish car- truck-like alternative for those wanting the best of both worlds for $6,000 less than a comparably priced Chevrolet Silverado 4x4.