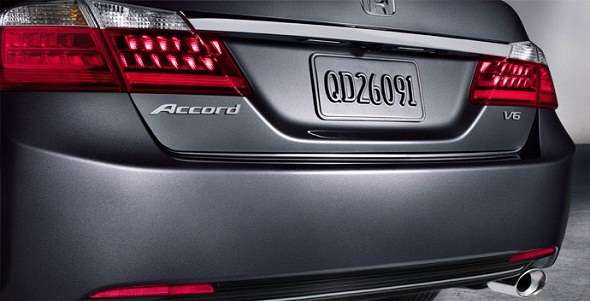 Why Honda Accord and Civic dominate U.S. light vehicle sales for 2013

While there is no shortage of choice in the mid-size and compact car sector in North America, Honda’s Accord and Civic continue to dominate the light vehicle segment. Placing 1st and 2nd in the light vehicle sales race, buyers 18-34 purchase more Hondas than any other make. What’s the hook that brings America’s youngest and brightest to the mark ?
Advertisement

I believe it’s Honda’s on board personal communications and audio interface compatibility and Eco-friendly engine technology; contained within a sophisticated ever-evolving fun to drive affordable car loved by millions.

If the 2014 Accord Coupe and Civic Si are any indication of things to come, Honda will continue to be the automotive benchmark in the mid-sized, small car segment. Year to date, Accord and Civic are number 1 and 2 respectively in light vehicle sales to young progressives between the ages of 18-34. This group represents the most tech-savvy generation in the history of the planet.

It’s also a group that’s grown up with Honda and carries no parent-programmed notions of an invading foreign manufacturer taking away jobs from American workers. To many Honda owners, their personal ride is as American or Canadian as your Chevrolet or Chrysler product. In-fact, Honda has manufactured more than 25 million vehicles in North America.

Operating 14 major manufacturing facilities in the U.S. and Canada, Honda has cornered 16.6% of the domestic automotive market. So how did this Japanese manufacturer become as American as mom and apple pie? By producing a quality; affordable; tech-filled, fun to drive personal statement.

What that statement says about the car’s owner is up to you.

Highly tunable as well as customizable, HRP and others, can provide those personal touches that say “ this is me, and I love my car.” It isn’t a man or a women thing, it’s a fashionable, kick-butt mobility thing.

48% of my readers are women, 52% men. Honda is about humanity. And the Accord is about just that “ reaching an accord throughout humanity.” True story. That’s how Mr. Honda envisioned it more than 40 years ago.

We can talk about quality and price all day long. Run as many TV and magazine ads as the next manufacturer (Honda doesn't). Saturate the internet with double click and side banner ads; while pushing a handful of seasonal dealership discount incentive and lease programs. Sure, advertising and incentives will bring in a percentage of new and return buyers. But, at the end of the day what builds and sustains a brand is brand loyalty; bred and enforced by consistent product quality, dealership service, and affordable long term ownership. Honda has done just that for decades.

Honda has manufactured Accord and Civic in Marysville Ohio since 1981 and is American as that Chevy truck that uncle Buck drives. O.K., I've owned a Chevy or two. Anyone in North America that was born in the early 80s has most likely ridden in, borrowed or bought a Honda made in America.

I’ve yet to talk to a Honda Accord or Civic owner that has not been satisfied by the overall quality and performance of their Honda. They look good, hold together for the long run, are infinitely tunable and are affordable to own and operate. Besides, Accord and Civic is one of the most progressive, quickly evolving “E” ticket rides in the U.S and Canada. And according to Kelley Blue Book enjoys the highest average resale value in its class.

I like the looks of the Accord SEMA Show concept car. While you probably don’t have an extra $20K sitting on the nightstand to reach the level of the SEMA car, you can take your Accord to the next level through the Honda dealership HRP accessory program or countless tuners via the Web for a lot less money.

And here as they say is the rest of the story… I think I’ll call it “ momentum in the marketplace.”

While General Motors and Chrysler went on the federal dole ( tarp bailout) Honda stayed out of the welfare line. They didn't disappear in 08’ or 09’. The 1000 strong dealership network didn’t fold, and 100s of thousands of auto workers and parts jobbers were not laid off from Honda plants or put out of business by a federally enable bankruptcy.

It would then stand to reason that during the economic meltdown, Honda picked up a greater percentage of the remaining U.S. market.

Granted, Honda’s sales numbers were down a bit, but unlike other major domestic manufactures, Honda didn’t lay off its domestic workforce. In-fact they continued to export production from North America.

While stability and momentum may have contributed to Honda’s growing brand popularity in the U.S., it’s Honda’s relentless development of technologically enabled environment- friendly fossil fuel and alternative energy ( regenerative electric and plug in) Hybrids, that has placed Honda at the forefront of the new golden age of automotive design in North America.

Young America is more Eco- aware than ever. They like “green,” they like Honda. One example of things to come is Honda’s FCEV concept as seen at the L.A. Auto Show.The car is but one example of Honda’s relentless quest to produce a sustainable, obtainable alternative to fossil fueled vehicles in the near future; perhaps as soon as model year 2015.

This year Accord sales are up 16% over 2012 with Civic approaching an 11% increase year over year. Considering the tough competition in the midsize and small car segment from Mazda, Hyundai, Chevy Volt and others, I find Honda’s growth to be astounding. Look for it to continue in 2014.

Today’s young informed car buyer is tech savvy. The Accord and Civic is a rolling “ Bluetooth” “IPad”, smartphone docking station that you can drive. How cool is that? In my opinion, Honda is on the cutting edge of things to come. And with its growing fan base, will enjoy a very bright future in sustainable Eco-friendly personal transportation; Honda style.

Parks McCants wrote on November 24, 2013 - 1:28pm Permalink
Why do you think Accord and Civic are the best selling mid and small segment car in North America. I'd like to read your Honda experience here.
RonaldbuM wrote on November 15, 2015 - 1:20pm Permalink
Organizations can compel their customers and employees to resolve disputes in arbitration proceedings bound not by state or federal law, but by religious edict.
Parks McCants wrote on November 16, 2015 - 8:10am Permalink
Your point RonaldbuM? Bring it on!
RonaldImini wrote on December 17, 2021 - 4:52am Permalink
FDA makes abortion pills permanently available through mail and telehealth by removing in-person restriction
RonaldImini wrote on December 20, 2021 - 6:05am Permalink
Black market goods divert revenue from important projects The public and private sector are working together to safeguard communities from scammers.
RonaldImini wrote on December 26, 2021 - 10:29am Permalink
The spike in consumer prices that left inflation at a four-decade high of 6.8% in November prompted the Federal Reserve to dramatically shift its approach as it eyes earlier and faster interest rate hikes.