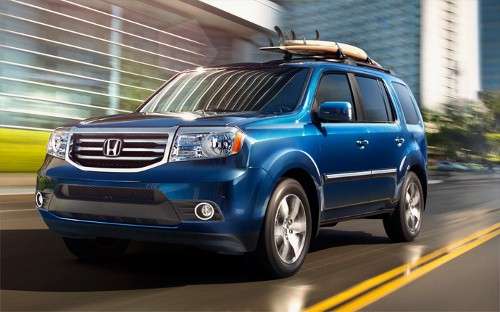 Today we decided to compare Honda’s large SUV with the Chevrolet Tahoe. While the Pilot will not tow 8,000 lbs, it will carry 8 adults in relative comfort at a fraction of the cost of your Tahoe. And, it comes standard with many features that the Tahoe doesn't offer.
Advertisement

Some would say comparing the Honda Pilot to Chevrolet’s Tahoe is much like comparing apples to oranges. I disagree. Both vehicles utilize a truck based platform, will seat 8 or more while rolling down the road in relative comfort. While it's true that the Tahoe is 11” longer than the Pilot, the interior space difference between the two is negligible. As demonstrated by headroom measurements, the behemoth Tahoe offers a mere additional inch over the cab height of the Pilot. And here lies one of the many short comings of the Chevrolet..

When one purchases a Tahoe, they're buying a downsized Suburban mounted on a ½ ton Chevy truck chassis. And, it rides like a Chevy truck. Don’t get me wrong, I’ve owned many G.M. products over the years and as trucks go they're reliable and infinitely rebuildable.

As to the Pilot, by Honda standards it's big. But when compared to the Tahoe comes in at 1,000 lbs lighter, a foot shorter in curb length and 6” shorter in height. The Pilot's ride is superior due to suspension characteristics shared with the Ridgeline.

Unlike the Tahoe, the Pilot comes standard with VTM-4 ( four wheel drive management.) No one else has it. And, it works better in the mud and snow than any other drive system on the road today. While Chevrolet has done a commendable job in increasing the average combined mpg of the Tahoe to 17, Honda claims 21city with 25 mpg Highway. You can find the specifications here.

How does Honda do this?

When we compare the power output of Chevrolet's 5.3 liter fuel injected V 8 to Honda’s 3.5 Liter SOHC i-VTEC, we find the weight to power ratio to be equal. Where Honda wins this contest is in its fuel management engineering. By combining drive by wire with VTM-4 and VCM (variable cylinder management,) Honda squeezes no less than 20% greater fuel efficiency out of a gallon of gasoline. Will the Honda burn flex fuel? Of course…

The Chevrolet is a damn good looking Dinosaur and here’s where it really hurts, at the bottom line of your purchase contract.

While both vehicles are manufactured in the United States, the Tahoe will set you back no less than $14,000 more than the Pilot. And, the Pilot is by far the greater value when it comes to “standard” base features.

Parks McCants wrote on January 3, 2014 - 12:45pm Permalink
Do you own a Pilot or a Tahoe? I'd like to read you here. Your thought provoking commentary is always welcome at Torque News Honda.
roy wrote on April 2, 2014 - 1:42pm Permalink
i just need to know which is good tahoe or pilot n how about maintenance which is cheaper.plslet me know. thank u