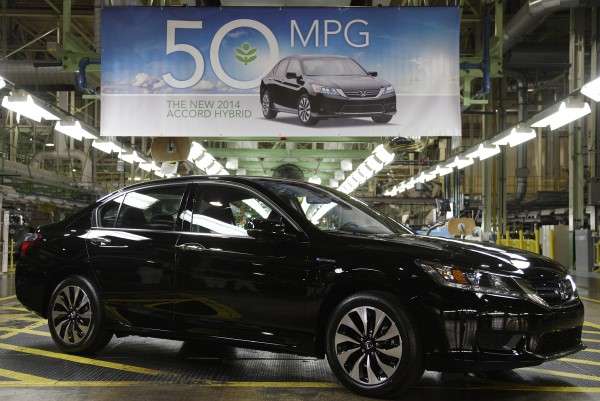 In a seemingly counter move to "regionalized" production and sales, American Honda Motors announced Thursday that its last remaining mainstream Hybrid, Accord will be produced and imported from Japan for 2016.
Advertisement

We could end the story here. But this tidbit of news is just the tip of the iceberg that is the ever-transitioning Honda Motor Company.

Honda’s mainstream Hybrid offering to be imported from Japan

According to Mendel, in a re-organizational move to accommodate the anticipated rising demand for Honda’s best selling CR-V SUV and Acura’s # 2 selling RDX SUV, Honda Crosstour production will be discontinued in East Liberty, Ohio. Furthermore, Accord Hybrid production will be moved from Marysville across the pond to Honda’s Sayama plant, Japan. Off to Honda’s auto museum will go the rather full-sized and undersold Honda Accord Crosstour, not a surprise to those that follow Honda sales numbers.

Over the past 2 years Torque News has noted a shift in Honda EV and Hybrid model offerings; they’re mostly gone. Honda Insight, Civic Hybrid, Acura TSX, Fit EX, Accord Plug-in, in that order. And in addition, we anticipate the demise of the Honda CR-Z sport hybrid.The 2016 Honda Accord Hybrid, when released to North America will be imported from Japan. We state that comment with a bit of hesitation and possible trepidation due to the missing in action 2016 Acura RLX Sport-Hybrid.

In an early morning email exchange, Ms. Nucci kindly reminded Torque News of Honda’s commitment to EV and gasoline/Hybrid technologies. As stated by John Mendel in Detroit, Honda’s intent to produce an all new stand alone EV, plug-in Hybrid, while integrating gasoline engine, multiple electric motor technology throughout the lineup is a given. The target model year is 2018; a rather short developement window by automotive standards.

Torque News looks to Japan for a quality imported Honda Accord Hybrid, and eventually the arrival of the much anticipated Acura RLX Sport-Hybrid. We're assured by Acura that the later will come to market in late spring, 2015.

Both offering's sales and marketing success is dependent on the near future development of mechanically bulletproof electronic control modules(CVT) and the volume availability of battery modules; Something that’s been problematic for Honda Motors in Japan as to the reliability of the top selling Fit Hybrid.

None the less, Accord Hybrid, featuring a manufactured in Japan engine, transmission battery module and charge controller has been relatively trouble free in North America, and yet a car-lot rarity in certain regions of the U.S.. We look forward to the arrival of a quality built in Japan 2016 Accord Hybrid.

boe wrote on April 10, 2015 - 1:19pm Permalink
PLEASE Honda/Acura - release an 2016 ACURA TLX HYBRID using the same great hybrid tech in your Accord hybrid. The current Accord Hybrid can't keep up with demand - no dealership in CA can keep them on the lot. I'd love a little more luxury and quitter rider though. The RLX hybrid is doing what Honda did with the 2005 Accord and the 2013 ILX hybrid ... not a lot of benefit to the hybrid - not great MPG and even the acceleration is a little weak based on the additional price. The 2015 Accord hybrid is GREAT - now how about sharing some of that greatness with a TLX hybrid?
Parks McCants wrote on April 10, 2015 - 2:39pm Permalink
Welcome boe. We'll see what the future brings. Honda's promising expanded hybrid and plug-in technology throughout the lineup. We'll keep you posted with development updates.