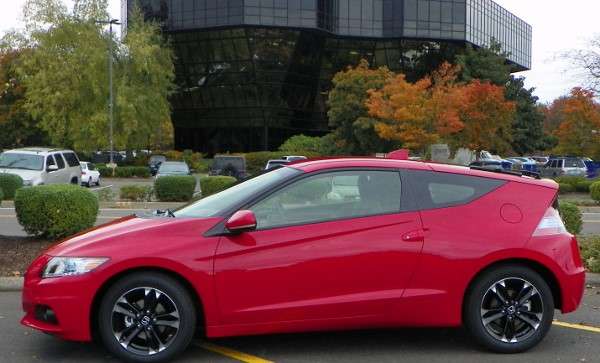 Torque news found Honda’s only 2 seat hybrid surprisingly fun to drive and economical to operate. Unfortunately, with combined U.S. February sales falling below 300 units, the buying public hasn't bit the hook when it comes to CR-Z. Is Honda’s only remaining 2 place sport-hatch headed for history?
Advertisement

Affordable 2 seat coupes my soon become an automotive segment of the past.Torque News-Honda knows of only two gasoline hybrid automobiles offered in the U.S. with a beginning MSRP of under $22,000, that’s Toyota Prius “C” and 2015 Honda CR-Z. One offers (tinny) seating for up to 4 passengers, while Honda CR-Z lends itself to the close intimate contact of roadster-like side by side front only seating.

CR-Z is the only affordable 2 place hybrid-sport-car on the market today. A car that many would be buyers view as a viable substitute for that yearning, burning “I want a motorcycle, but my (girlfriend, partner, wife) says no! confrontation.

While CR-Z Hybrid is not a tire burner by any measure, we found the torque transference to the road, via the 1.5 liter four cylinder gasoline and electric helper motor(130 horsepower/140 ft-lb torque,) 6 speed close ratio manual or optional CVT transmission(127 ft-lb torqued) to be more than adequate, and sometimes downright exhilarating!

The previous paragraph may read a bit counter to what you've read from our Honda, Acura column in the past. However, we’re hybrid technology fans, and for us, this small but elegantly constructed and executed hybrid does the trick.

Smaller than Fit, with interior measurements fitting a “big man”

CR-Z Hybrid’s an odd little Honda. Visually, unless you park it in the lineup, CR-Z doesn't visually come across as being tiny. But tipping the scales at a feather weight 2716 lbs for the fully equipped EX with Navigation, this hybrid is the second lightest vehicle in Honda’s North American lineup; CR-Z weighs in at 67 lbs heavier than Fit with +10 to 20% greater torque delivery at a lower mid-rpm range.

While CR-Z is not this car, it does perform when commanded to do so.

Torque news has interviewed several CR-Z owners that love the car for its commuting comfort, fuel economy and sport-like road handling. We liked it for its Civic Si-like interior styling, fantastic hybrid dash display and quirky good looks! While not for everyone(the sales numbers have spoken) we believe that CR-Z adds a bit of much needed automotive segment diversity to Honda’s lineup, and would hate to see it discontinued.

Type R engine for CR-Z or something like it

Back in 2013 we reported the advent and offering of HPD’s supercharger kit for 2014 CR-Z. we caught the modified CR-Z running on the track leading the tire-heat-up lap for Indycar at Sonoma

Raceway. We were hooked! With Honda’s planned production of North American turbocharged engines for late 2015, we’ll hold out hope for the continuation of Honda’s only two passenger hybrid coupe. Throw a little more power at it, fans will return to purchase a true-performance CR-Z.