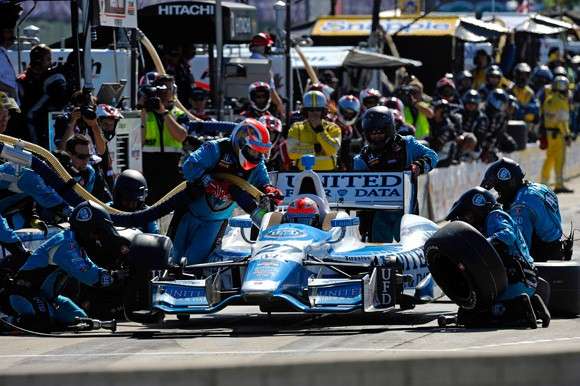 Racing is racing and unknowns dominate an expensive game of corporate sponsored cat and mouse. Sundays “Duel 2” at Detroit witnessed Chevy power dominance as Team Penske took the checkered flag for the win. No worries…
Advertisement

No getting around the facts…Team Honda was hammered in Detroit by Chevrolet power despite dominating the front row at the start of the race. As stated by Mark Crawford of Honda Performance Development... “ The yellows came at the wrong time for them, “I believe qualifying was a more accurate indicator of our performance” said Crawford.

True enough, Honda power dominated qualifying as Sato and Hinchcliffe took pole and second position. We consider this to be a bi-week performance as Honda comes of off the epic win at the Indy 500. Team Andretti Autosport will lick its collective wounds and return to the Fort Worth, Texas, Firestone 600 as a force to be reckoned with.

Round 8 will bring with it a surprise or two as Honda power regains a dominate position in the series with Honda eventually taking the manufactures trophy.

With 11 races remaining in the series the top 3 drivers are separated by a mere 29 points, with Chevrolet and Honda battling for the manufacturer’s trophy. That’s what makes IndyCar series exciting. The difference between 1rst and 2nd place in Indycar is often less than .01 seconds. Being “ forced to the outside” can make or break you in open wheel racing. Brushing the wall with a tire sidewall at 180 mph can cost you more than the race.