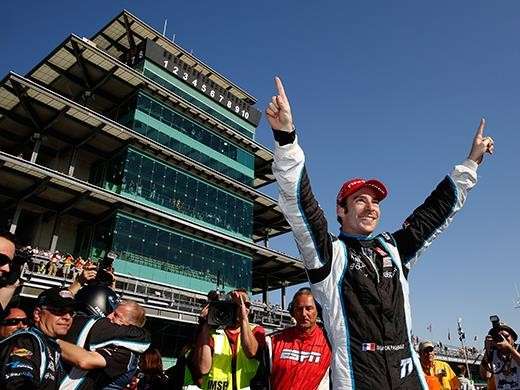 There’s a reason why those in the know question the standing start utilized in American Grand Prix racing. It’s unnecessarily dangerous as demonstrated at Indianapolis
Advertisement

Watching the Saturday start of the inaugural Grand Prix of Indianapolis was a painful reminder of the inherent dangers of racing.

The “Brickyard” is not a stranger to fatalities. Frankly it’s nothing short of a miracle that Carlos Munoz, Mikail Aleshin and rear-ended pole positioned Sebastian Saavedra were not grievously injured.

Yes, Honda did win Saturday, but only by default. Not to take anything away from the very skilled Simon Pagenaud of Schmidt Peterson Hamilton and Ryan Hunter-Reay of Andretti Autosports, both, exceptional world-class drivers. It’s also a credit to Honda and Dellara engineering and safety upgrades, that all drivers walked away from their cars with minor or no injury.

Race # 4 of the Verizon IndyCar series proved to be an expensive weekend for Team Andretti; with top time qualifier Ryan Hunter- Reay backing into the wall at speed during Fridays wet and wild qualifying event.

Stalling at the start of a race can be fatal as drivers jockey for position coming off of the line. Six seconds into the race all hell broke loose.

Depending on how far back one is in the field determines the velocity of the car as it comes up on the pole. In this case 22 year old rookie Carlos Munoz was coming out of 5th gear when he rear ended the stalled Saavedra. Speed at impact? 80 mph.

Count to six while shifting gears, controlling throttle and watching the field move in and out for position. Are you going to miss the rear end of the car stalled several hundred yards ahead and to your right?

Take a look at the video. I believe that you’ll agree with us, countless team owners and drivers that the standing start historically utilized in Grand Prix has no place in today’s insanely fast race track environment.

Put a pace car on the track and let’s get on with it.

Coming into race # 5 we find 3 drivers within 6 points of each other. Manufacturers Chevrolet and Honda show 2 wins each. Barring further accidents or mechanical breakdown, Power, Hunter-Reay and Pagenaud should be the ones to watch as IndyCar continues at the Indianapolis 500, May 25, 2014.

Rick Hauser wrote on May 16, 2014 - 6:21am Permalink
You really believe "the standing start historically utilized in Grand Prix has no place in today’s insanely fast race track environment"? You are saying Grand Prix racing is not of today’s insanely fast race track environment but some sort of throw-back? They can do a standing start but it is something beyond IndyCar? Your only solution is to eliminate standing start? With your knee-jerk reaction there would be no racing today had you been around in 1964 at Indy when two drivers died after a pace car start.
Parks McCants wrote on May 16, 2014 - 2:00pm Permalink
Good day Rick. Actually, I was around in 64.' and have been racing since a teenager. The problem is not with the standing start. It's with the immediate " staggered dash " for position by the drivers. What we witness in the attached video could be avoided by a running start, or a 10 second time interval prior to the jockeying of position by the drivers. Nothing to do with me Rick. The team owners are calling for the change. Stalling at the start of a race? Now that's another problem. Can you say Rookie? Take care, and thanks for your thought provoking( sic) comment.