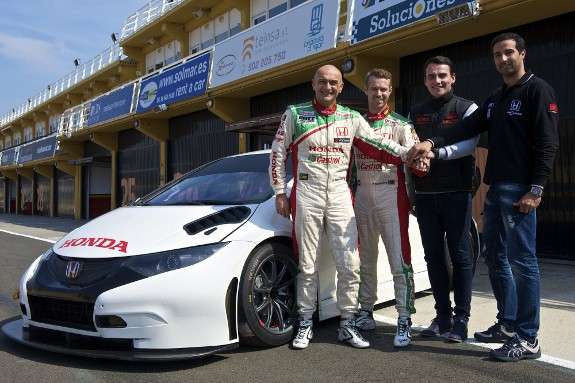 Arguably one of the most successful racers in Honda history, Tarquini will lead Castrol Honda to WTCC dominance against a field of Citroen, Chevrolet, Lada and Seat, Leon’ tour class race cars. Also running Honda hardware is formidable J.A.S. Motorsport Honda Racing of Italy and Nika Racing of Sweden.

First stop for the 2014 WTCC tour is the streets of Marrakech Morocco. In 2009 WTCC returned G.P. style street racing to Morocco after a 50 year absence. This event marks the much awaited debut of the 2014 Civic WTCC.

Noted as a more powerful race tuned contender than the 2013 manifestation, team drivers have expressed excitement and confidence as to the 2014 Civic WTCC coming into the 2014 season. Torque News-Honda reported on the car late last year. Reported to be rated at 380 hp, this 1.6 liter direct inject, turbocharged 4 cylinder will rock the world of WTCC racing.

In other news: Nika Racing of Sweden has abandoned Chevrolet for a Super Civic 2000 with Yukinori Taniguchi at the wheel. While a notable driver, Taniguchi doesn’t bring to the competition the win record of Honda’s Tarquini. However, racing is racing, and anything can happen on race day as exhibited here.

For North American race fans, Sonoma Raceway in California will be the only state side stop for WTCC.