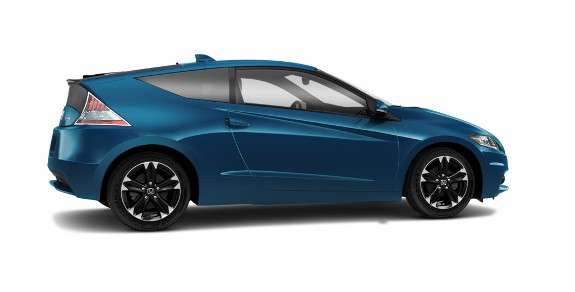 Nate Westwood of Eugene Or. is very happy with his 2011 CR-Z Hybrid. The little Honda Hybrid has traveled 92,000 miles with little more than an oil change and occasional washing.
Advertisement

Torque News literal ran into Nate’s 2011 CR-Z at the West 11th Ave. Eugene main post office. No worries, there was no damage to the car and the opportunity for a quick interview, turned into mutual admiration for the North Shore Blue Pearl colored 2 placed hybrid sports coupe.

Sitting next to a Volvo S 80 T, the CR-Z didn't appear to be micro.

Nate’s a 20 something, graduate student at the UofO with impeccable taste. One could eat off of the hood of his car. His only complaint as to the CR-Z is the ‘sometimes’ missed rear seat.

When asked about the car’s low horsepower and torque rating, Nate tells us that his last “G” ride was a 2009 Subaru WRX. When comparing the power of the somewhat demure CR-Z to the WRX, He tells us “that while the CR-Z won’t win any races,” the only time he finds himself reaching for torque is when downshifting at freeway speeds." And according to Nate, that only happens on steep grades.

Likes and dislikes: Nate likes the style of the CR-Z 3 door hybrid sports coupe; the fit and finish of the car and handling characteristics.

High on Nate’s list and he likes sharing this information; his 2011 CR-Z sport hybrid coupe average 44 miles per gallon on the freeway while approaching 40 mpg in town.

Again - and he was animated while making this point, his only complaint as to the CR-Z is the sometime missed rear seat. Nate is anticipating a new family member and tells us that the CR-Z in his opinion, is not a good family car.

Sharing a couple of performance upgrade tips with Nate, we said our good by.

Perhaps there’s a 2014 Civic Si Coupe in Nate’s future. While he’s not saying, he does share with Torque News that his fiancé may have a say in Nate’s next Honda purchase.

Dennis wrote on April 15, 2014 - 12:47pm Permalink
I've been looking at the CR-Z's, especially the used 2011 ones since they're not expensive at all. Just wanted to know if there were any issues with the car even after driving it so much? Battery issues? Or did you just basically do the regular required maintenance? (oil change, transmission fluid, timing belt after 100k miles, etc)?
Parks McCants wrote on April 16, 2014 - 7:30pm Permalink
Trouble-free Honda quality Dennis. We hear from many owners, all very happy with the car. Go for it.
Michael wrote on April 16, 2014 - 10:22am Permalink
My 2011 cr-z has 140k miles, and is running great. With a daily work commute of 140 miles round trip I'm averaging about 39/40 mpg highway. This car is definitely a head turner. Sporty, fun to drive, fuel efficient, and a true full size two seater. I can't wait to see a newer model in the future... Hopefully they will give the us model a sun roof like the European model.
Parks McCants wrote on April 16, 2014 - 7:31pm Permalink
Fantastic Michael. I believe the car to be very under rated due to its 2 place configuration. A great commuter.
Don Sayer wrote on May 21, 2015 - 1:54am Permalink
I have a new 2014 CRZ, it died after 1,000 miles of driving. dead-in a gas station. They (honda) charged me 76 $ to come tow/jump it! The battery (engine 12volt) is inadequate to run a car. It has serious issues, google 12volt CRZ!
Parks McCants wrote on June 2, 2015 - 11:25am Permalink
Welcome Don. Are you referring to the 12 volt starting battery or the hybrid battery module? Thanks.