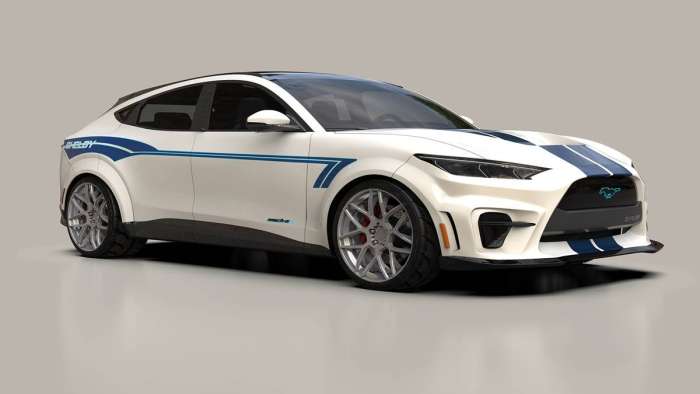 Shelby American has always been known for pushing the envelope on performance when it comes to Ford products (despite a brief affair with Chrysler in the '80s and '90s.) But while large V8 engines have become the proverbial symbol for the aftermarket tuner, even Shelby isn't immune from the electric revolution, and the company showcased a possible response, the Shelby Mach-E GT Concept.
Advertisement

The race towards full electrification is moving at a blistering pace. The Ford Mustang Mach-E is a potent example of just how performance driving can be infused with green electrification technology. That includes some of the wild offerings that are built by Shelby American. The long-time Mustang tuner has finally focused its attention on the Mach-E, and it has unveiled a potential answer to what its version of an electric future would look like with the all-new Shelby Mach-E GT concept.

Shelby Styling In A Futuristic Package

As far as SEMA styling goes, the exterior styling of the Shelby Mach-E seems tame, almost pedestrian. But Shelby has always preferred to let the performance of the bulk of their custom creations do the talking versus the exterior embellishments. But look over the concept's canvas, and some things do stick out and pull you in for a closer look.

The Mach-E GT concept comes with larger alloy wheels, a reworked front end with a more prominent front splitter, and the trademark white pant with blue stripes that once defined vintage GT350 models of the 1960s. Sadly, we don't get a good look at the rear of the concept (or the interior for that matter) but look for the cabin, in particular, to come infused with Shelby cues as well as a grippier set of sport seats.

The concept also rides on a set of custom-tuned Magnaride dampers with composite carbon fiber springs, which should sharpen the handling experience for drivers while also blunting some of the weight that the battery pack brings to any performance EV model.

Supporting Cast Makes Waves In Their Own Ways 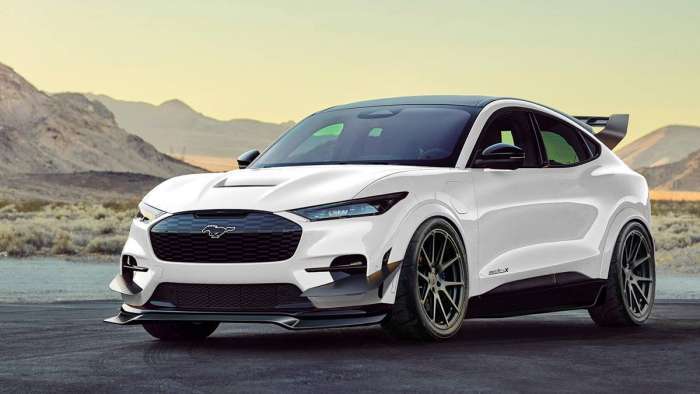 It has a wilder suit of clothes than the fore-mentioned Shelby, with Archetype Racing providing the front splitter and massive rear wing. At the same time, OZR sourced 20-inch Rotiform wheels are shod in sticky tires that encourage maximum amounts of grip in the corners. The concept will also have a date with the auction block, with Austin Hatcher revealing that it will be auctioned off to help provide funding for its cancer-fighting efforts. However, it will have the chance to stretch its legs at the 2022 Bonneville Speed Week, where it will attempt to cross the 200 mph barrier. 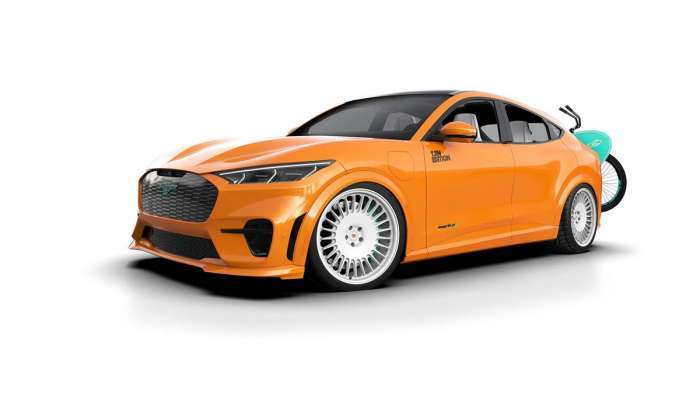 Meanwhile, the Tjin Edition Ford Mustang Mach-E California Route One concept goes in a slightly different direction in its attempts to woo the crowds at SEMA. Ford claims that the concept is a rolling testament to Neil Tjin's design philosophy, trading raw performance for West Coast infused styling. Stylish orange paint mixes with teal green contrast elements, while the custom LED headlights to give the concept a distinct personality.

The highlight feature here on the Tjin Edition is solar panels mounted on the roof and rear of the concept. Ford claims that the panels are designed to help provide juice to a custom RayVolt electric bicycle mounted on its bespoke rack. The suspension is replaced with a custom full airlift suspension, while custom 22-inch custom painted Vossen-ML wheels enhance the slammed look and are shod in massive Falken ZIEX S/TZ05 tires.

All three Mach-E builds will make their respective debuts next week at the 2021 SEMA expo in Las Vegas. While the Tijin Edition and the Austin Hatcher variants are pure one-off creations, the Shelby Mach-E could eventually morph into a production model. However, it might be a few years before Shelby reveals a potential production version, especially if it has to make tweaks to its factory to accommodate Mach-E production.

Tesla Giga Berlin's New Hurdle: It's Not Only the Gov't, but Now Tesla Itself
Teslas Are Sold Out Until 2023, But The Timing May Reverse
END_OF_DOCUMENT_TOKEN_TO_BE_REPLACED