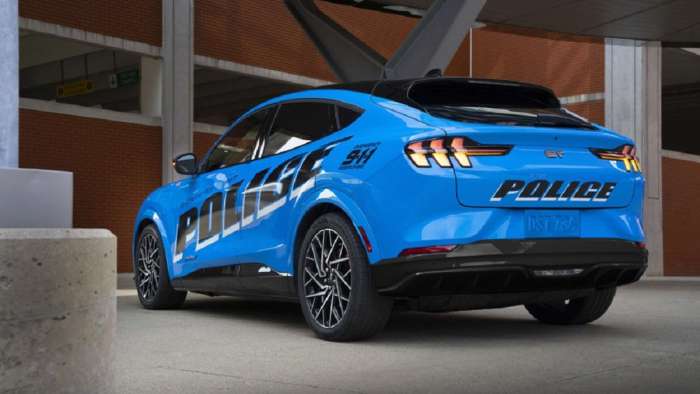 The Michigan State Police evaluation tests are one of the toughest tests a potential police vehicle can go through in the country. The brutal driving and capability tests push vehicles to their limits, but the Ford Mustang Mach-E has made history by being the first pure electric vehicle to pass the challenging gauntlet of tests.
Advertisement

When Ford first announced that the Mustang Mach-E GT would take part in the Michigan State Police's infamous vehicle testing regimen, we were curious about how a pure electric vehicle would fare in tests that have been long dominated by ICE powered vehicles? Ford has emerged with the answer, revealing that the Mach-E GT police interceptor concept not only passed the tests, but is also the first EV to do so.

The Mach-E's strong performance in these tests not only made history, but could also potentially point to a bitter rivalry between Ford and Tesla in this electrified sub-genre of the police vehicle market. Prior to today's announcement, Tesla vehicles have been the preferred choice for law enforcement agencies looking to add zero-emissions vehicles to their patrol fleets. This is partially due to the capabilities of models like the Model Y crossover and the head start that Tesla has had when it comes to building a reliable network of charging stations.

However, other EV offerings are starting to catch up to Tesla and models like the Mach-E GT could potentially swing the balance of power away from Tesla. This would especially be true when it comes to servicing them, with Ford's larger dealer footprint giving law enforcement customers more choice when it comes to getting their zero-emissions police vehicles serviced. That's in stark contrast to Tesla's which is smaller, and in states where Tesla's direct sales model has been banned, buyers are forced to take their Tesla vehicles across state lines to have them serviced.

“The fact that the Mustang Mach-E successfully stood up to the grueling Michigan State Police evaluation demonstrates that Ford can build electric vehicles that are capable, tough and reliable enough for even the most challenging jobs,” said Ted Cannis, CEO of Ford Pro. “We understand the needs of our commercial customers and are committed to unlocking new electrification opportunities for them.”

As mentioned, the Mustang Mach-E's passing grade in the Michigan State Police's gauntlet of tests is a very impressive feat, but there's still some work that needs to be done before you could see legions of Mach-E's patrolling your street. In the case of Mach-E's that could potentially enter MSP service, they would need modifications that would beef them up for service. That includes push bars, accommodations for communications equipment, and lighting. Ford didn't reveal what modifications (if any) were made to the concept but it's safe to assume that it was factory stock.