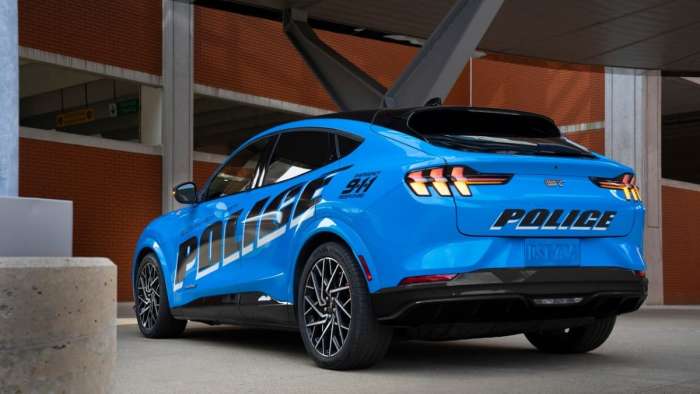 The race towards an electrified future is forcing automakers to take the electric vehicle segment in some newfound directions beyond the consumer market. That includes offering models to police departments to add zero-emissions motoring to the world of crime fighting. Ford appears to be fully prepared for this and has not only revealed the all-new Mustang Mach-E Police Interceptor concept, but also plans to formally enter it in the infamous Michigan State Police vehicle trials.

If the Mach-E passes all of its trials, the EV will have two sets of shoes to fill in the police world. Not only would it have to follow in the footsteps of the Explorer and Taurus based Police Interceptor models, but it will also have to potentially fill the void for the Mustang coupe which specific departments use to help give them a leg up when chasing down potent getaway vehicles.

Ford did not reveal what modifications were made to this particular Mach-E to prepare it for the trials, but on the surface, it appears to be a factory fresh Mach-E GT with the distinct wheels and Brembo brakes being its two key calling cards. The GT makes 480 hp and is capable of making the sprint to 60 mph in 4.0 seconds. This muscle would give this flavor of Mach-E the muscle needed for some pursuit situations, while the utility focused SUV shape will allow it to lug all kinds of police gear around town. 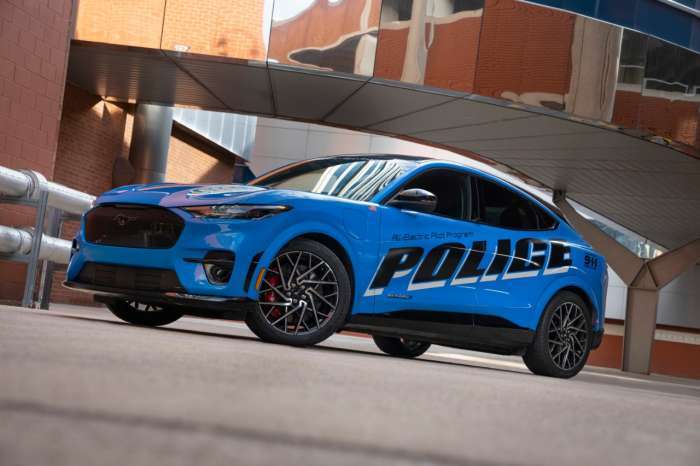 The MSP’s evaluation tests are some of the most stringent police evaluation tests in the U.S. and push prospective police candidates to their limits. It will be interesting to see how the Mach-E does especially as the first EV offering to enter the trials.

Part Of A Broader Corporate Plan

While the Mustang Mach-E will be the figurative spearhead in Ford’s attempts to enter the police vehicle market, it will be far from the last, with Ford using what it learns from the Mach-E's trials to help them build better EV police models.

This could include models that are based on the Mach-E platform with Ford potentially being in prime position to reap the rewards. That includes a larger slice of the broader market especially if more departments choose to replace their ICE powered cruisers with EVs.

In the case of the Michigan State Police the bulk of its highway enforcement fleet is made up of V8-equipped Dodge Chargers with the beefed-up Dodge sometimes sharing duty with the Chevrolet Tahoe and the Explorer Police Interceptor. The Chargers are fast, but they guzzle fuel and have also proven to be reliability fueled headaches for the department especially when compared to the legendary Crown Victoria cruisers that were retired to put them into service. A Ford badged EV could help give the department a viable replacement especially if it has better reliability. Other roles that a new Ford EV can slip into could include bolstering Explorer Interceptors in urban enforcement while F-150 Lightning pickups could be used in supportive roles especially with their novel Pro-Power onboard power generator system powering police equipment and other support items.

eyePap wrote on September 18, 2021 - 6:20am Permalink
hello, how can i solve this problem with this page showing? eyeg