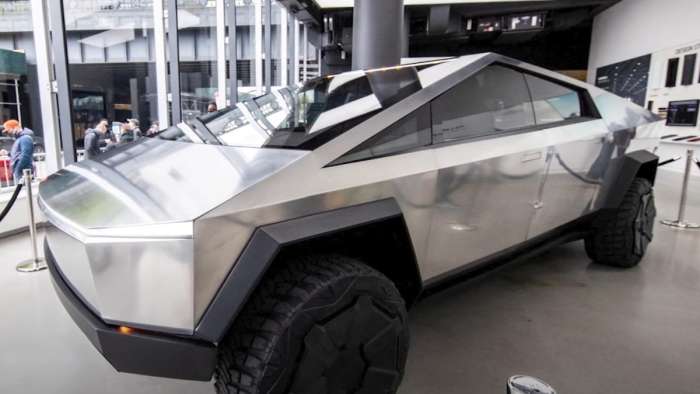 Will the Tesla Cybertruck Ever Be Released?

Will the Tesla Cybertruck Ever Be Released?

We've heard how the Cybertruck will be pushed back in production and is delayed again and again. Some expected to get a Cybertruck at the end of 2021. The Cybertruck is the ultimate product in many areas: durability, range, look and style, performance, etc...

When the Cybertruck reveal happened a few years ago, it was an instant success and many people - over 1 million now - place a pre-order. This was even after the Cybertruck window broke after having a steel ball thrown at it. Why is the Cybertruck being delayed? Well, it all comes down to Tesla's mission.

Tesla's mission is to accelerate the world to sustainable energy. There is climate change and saving the planet is important. Once job #1 is taken care of, then Tesla can do other things like making the Cybertruck and the Roadster. Those two vehicles will prolonge the mission, even though the vehicles are amazing.

The Cybertruck is not like any new EV. There is a lot of complexity involved in building it. There's some simplicity too, with it not having paint or having any rounded edges on the frame. Tesla may have been concerned about the demand of the Cybertruck initially, but now with well over 1 million pre-orders, there's no concern.

Existing Models Will Get Priority

I think the Cybertruck will eventually get made. It addresses a large segment of vehicles that people buy each year, the pickup truck market. And Elon wants to address all major vehicle market segments - and the pickup truck is one.

The Cybertruck is a major engineering feat and I think Giga Texas needs to be ramping at volume production before the Cybertruck gets started. The good thing about the Cybertruck is that it has caused other vehicle makers to transition to EVs faster - namely the electric Ford F-150 as well as Rivian making only trucks.

Tesla has their hands full with the Model 3 and Y. Tesla is also battery constrained. When there are so many batteries that there is an abundance of batteries, Tesla will much more easily be able to focus on these other vehicle segments, like the Cybertruck.

Elon also wants the Cybertruck to be the most amazing vehicle available. He doesn't want an average pickup truck. I wrote a while back that Tesla should make a basic version of the Cybertruck, but I don't see Elon Musk doing this. He will want something that is a technological wonder and be able to make it at an affordable cost.

To do this, Tesla needs a lot more 4680 batteries. These are the batteries the Cybertruck will use and the truck will need to be affordable and have a long range with great performance. I think it all comes down to batteries though.

I expect to get my Cybertruck in about 3 years - we'll see if it's any sooner or longer than that. Or, it will be released much further down the road - in about 5 years and I won't get it until the end of the decade. Either way, I'll be waiting as patiently as I can.

Will Tesla release the Cybertruck in 2023? Or will they release it late in the decade because of current demand for their vehicles?

DeanMcManis wrote on February 24, 2022 - 8:09pm Permalink
I think that the Cybertruck production will begin later this year or early next year. Tesla is VERY busy opening Giga Texas and Giga Berlin in the next month. And the Giga Texas Model Y will be getting the structural battery, case frame, and 4680 batteries. The 4680 batteries are coming from California now, but soon (over the next 6-8 months) 4680 factories in Texas and Germany will start cranking out 4680 batteries to cover the current Tesla models, and ramp up production volume to handle Semi and Cybertruck battery demands. Panasonic (who makes Tesla's 16850 and 2170 batteries today) will build their own 4680 batteries in Japan. Probably next year. I have no doubt that Tesla will ship their Cybertruck by 2023 at the latest, but it will take years to catch up to fulfilling the HUGE backlog of Cybertruck preorders. Even with delays I anticipate that Tesla will be the 3rd automaker to release an EV pickup in the U.S. With Rivian already shipping their R1T, and Ford building the Lightning this year. Even though GM will have their Hummer pickup out, they will only build a small handful of the $113K beasts. And the EV Silverado is slated for 2023, but really that will be 2024 for most people. And the rumored EV RAM will follow GM in 2024/25. So even though the Cybertruck delays are disappointing for Tesla fans, the EV pickup competition is not breaking a sweat to scale up to mass production soon. So Tesla has got some time to get the new Cybertruck design and mechanical bits sorted out without needing to worry too much about the competition before 2025.
chris wrote on March 22, 2022 - 11:33am Permalink
I dont think the cybertruck as we see it today will ever be made. the cost of raw materials will see to that (not teslas mission... because tesla also has the mission of making money). What i do expect to see is an aluminum bodied version, with options that were origionally presented as "standard features." they also need to improve the battery performance to bridge the gap between "long hauls" and city driving... compound that with the inability to back towing loads into existing charging stall and you are left with a MUCH bigger need than the truck itself.
Kyle Federico wrote on May 12, 2022 - 2:21pm Permalink
I personally have 2 Cybertrucks on order. I would agree with others that Tesla will not get their required profit margins if they honor their current order pricing. "IF" they ever make the Cybertruck, it would be different models than our reservations and we may be allowed to "upgrade" at a significant jump in cost. It is also a question if Cybertruck will still be relevant in 2026 or whenever Tesla ever starts building them. I personally am not in a hurry for them, but if the time comes, I will not wait for Tesla to make good on timelines.